The piece that students will give concrete representation to will be placed on the facade of the Artistic and Academic College of East Manhattan, located in East Harlem. 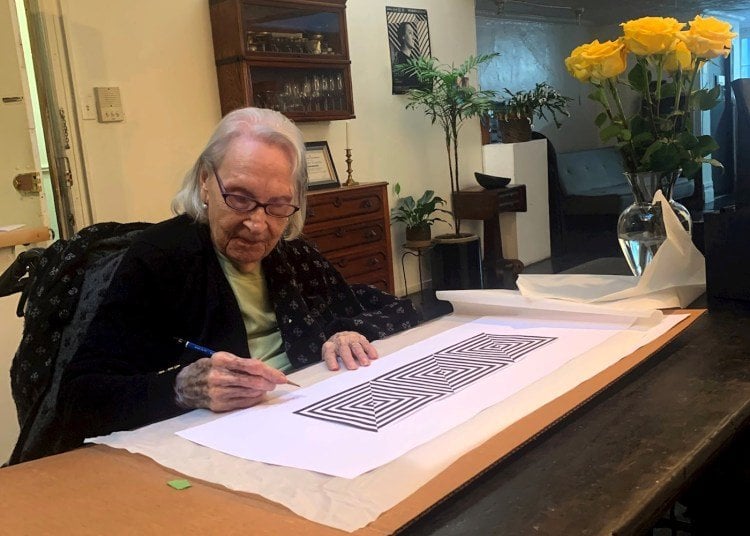 Carmen Herrera while working on the adaptation of her work, executed in 1987. Photo: Jonathan Marder & Company/EFE.

The streets of East Harlem, in New York, one of the areas where the largest Latino population in Manhattan is concentrated, at the end of April will have a huge mural by Carmen Herrera, the 104-year-old Cuban artist whose work started being recognized just about fifteen years ago.

The piece is titled Un Dos Tres and is more than 16 meters long and 5 meters high and will be located on the facade of the Artistic and Academic College of East Manhattan.

As of April 18, students of the Publicolor program, a project designed for young people belonging to communities at risk of exclusion, will be responsible for materializing it.

“I am very proud to offer this image to the Spanish Harlem (as the area is known),” Herrera said in a statement, adding: “In particular, I am proud that Publicolor students, many of whom speak Spanish, such as I, are being the ones to create it.”

Un Dos Tres is a “free adaptation” the artist has made of a 1987 painting titled Diagonal, with black and white lines to form several square and rhomboid figures.

“I selected several images and reduced my options to the one that best suited the specific place and, above all, to the one that was a challenge that would motivate the students who are doing it,” explained Herrera.

“My main goal is to somehow communicate to students what imagination and group work can achieve,” she added.

The work is expected to be completed before Herrera’s 105th birthday, next May 30.

The new project, says Publicolor in the text, not only brings Herrera’s work to the streets, but also brings a lot of life to an area that lacks visual beauty.

It’s not the first time that the work of the centenary artist can be seen in New York’s open spaces. In July 2019, the city’s Public Arts Fund showed in the exhibition “Monumental Structures” five large colorful sculptures in the City Hall gardens.

Born in Havana, in 1915, Carmen Herrera moved to Paris after World War II, where she perfected her minimalism and geometric abstraction. In the 1950s she permanently moved to New York.

Although she was part of New York’s artistic society, her work was largely ignored until she was 90 years old and commercialized her work for the first time. Since then she has been considered one of the most important figures of the abstract movement and minimalism.

The rise of Herrera has led to some of her works being sold for millions of dollars. In March 2019, her Blanco y Verde painting was auctioned for 3.9 million dollars in New York by Sotheby’s.

The oil painted, carried out between 1966 and 1967, far exceeded the highest expectations that placed its maximum price at 2.8 million dollars.