His sculptures in the Plaza de Armas were among the most striking works of the recent Havana Biennial. 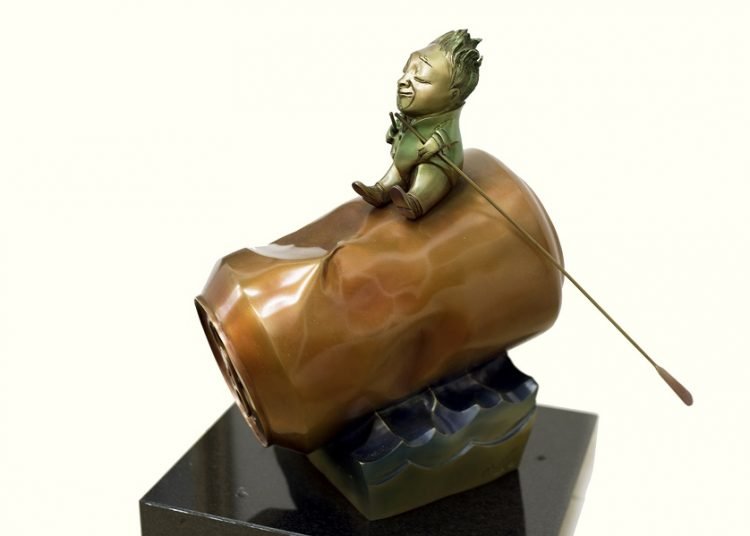 Pedro Pablo Oliva is a magician of color and shapes. His oneiric and symbolic universe reaches the viewer directly from his soul, from his spirit, in sculptures, fabrics and cardboard.

From Pinar del Río and faithful to his roots, winner of the National Prize for Plastic Arts in 2006, he leaves a piece of himself in each of his works. In the concluded Havana Biennial it was possible to observe it in several places visited by OnCuba to converse with him.

“I participated, thanks to the Office of the City Historian and to Eusebio Leal, with bronze sculptures in the public space. Three of the sculptures: Clementina, la siesta y el gato, from the series ‘Sillones de mimbre’; El beso, from the series ‘Alegrías y tristezas del Malecón’; and El tierno amor de Bustelo, were located in the Plaza de Armas on the corner of Obispo and Oficios.

“I’ve been told that people have passed by and embraced the sculptures, there are those who have asked themselves if it is a tradition to clean them or touch them, as at some point it became a tradition, because it gave good luck to touch the beard of the sculpture of the Caballero de París, by Jose Villa, located in the Plaza de San Francisco de Asís.

“I’m happy that people approach my art and that it generates in them enjoyment or hope. In the Biennial I also exhibited the sculpture Novia llorando, a song to the loves that have been broken by emigration, a cry of shores.

“In Pinar del Río, in the exhibition ‘Vitral de Vueltabajo,’ I presented, let’s say, a gesture, an intervention in the 3 meters of wall I was given to exhibit. It is a small red canvas that’s called ‘Naturaleza Muerta no. 349,’ a tribute to Lázaro Saveedra.

“It’s something unusual in my work. I think I hadn’t painted a still life since the 1980s, but my friend Saavedra taught me that art is a weapon of struggle. In the OPEN studio, in the La Mina workshop in Old Havana, I also have on exhibit drawings from the series ‘Los fantasmas de la Utopía’ and small- and medium-format sculptures.”

In what have your works formally and conceptually consisted in this edition of the event?

My proposal for the Biennial was something that I have been working on intensely in recent years, my new children: sculptures. I have discovered pleasure in expressing myself in three-dimensionality, of playing with forms, blank spaces. I believe that for me the three-dimensional space is something that imposes new challenges and that I dream of mastering. But I still don’t think I’m a sculptor, so like a child I play with plasticine.

I have found a great team in RUN Art Foundry, in Miami, with Uldis López at the helm. I have students there, friends and that gives me pleasure. To feel I learn with them, discuss topics of art, politics, things about everyday life, listen to jokes while I work. Feeling essentially Cuban among them.

What does it mean to you as an artist to have participated in this edition of the Havana Biennial?

Well, you know, I’m old. Nothing amazes me. I am part of a group that saw the birth of the Biennial and nothing seems new to me. I’ve already seen so much that I think I’m at the Arc Fair or the Venice Biennale. Of course, I like to see young people express themselves. Because from them I drink new ideas, I get new concerns, I generate new ways of doing.

At what stage do you think you are right now in your career?

In the worst. I’m at a time when I don’t believe in anything. At a time when I find it hard to feel that what I do or say is worthwhile. But I’m used to it, it’s not the first time I feel that way. I’m excited to think that such moments will generate changes in me. We’ll see what happens. The changes can be for good or for bad.