If the country only keeps the CUP for monetary circulation in cash, but the USD also remains operating in stores selling in freely convertible currency, without the mediation of cash, we would not be in the presence of a monetary unification. 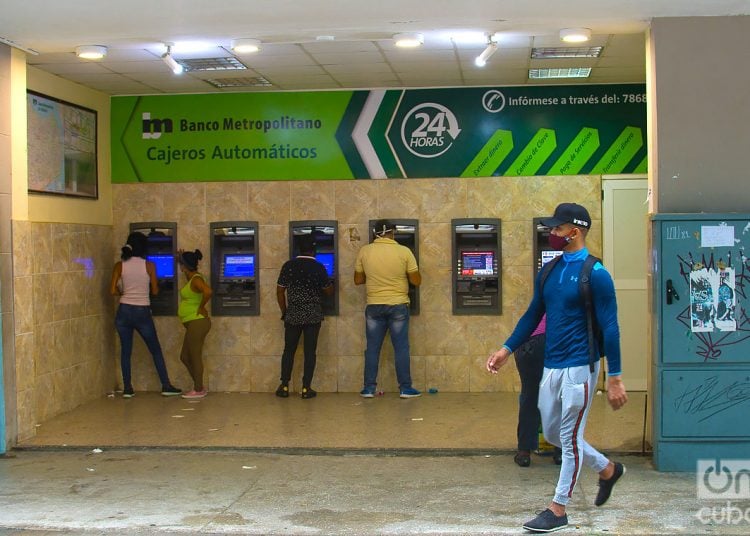 ATMs of the Banco Metropolitano in Havana. Photo: Otmaro Rodríguez.

In recent weeks, multiple reports have appeared on television, articles in the press, and statements that suggest that the long-announced monetary unification will finally take place soon. I mean, now the wolf is really coming.

On other occasions, the process has been stopped by assessments of its complexity and other unforeseen events, but now, is what is really intended a monetary unification?

Normally, specialists describe the processes that have already taken place, give assessments, or offer suggestions on which paths will be taken, but they rarely make predictions about what will happen, since forecasting politicians’ future decisions is not usually within the scope of our faculties, since the future should not be predicted given that it’s unpredictable. However, in the face of such a momentous and long-debated event, allow me to make some assessments about something that could happen in the short term.

First, we must remember that at the end of 2019 the sales mechanism in USD was created, with a limited list of products and through credit or debit cards. Sales in USD were recently expanded to food, toiletries and hygiene products, hardware, etc. It is to be expected that a recently extended mechanism necessary to attract freely convertible currencies will not be phased out so quickly. Therefore, if the country only keeps the CUP for monetary circulation in cash, but the USD also remains operating in stores selling in freely convertible currency, without the mediation of cash, we would not be in the presence of a monetary unification. It doesn’t matter that the USD is not accepted in cash; there would be two currencies operating in the country and there would continue to be a dollarization of the economy, even if it was partial and the dollar is banked (used only through swift cards).

Actually, when stores were created for sales in USD, where it is only possible to buy using cards as a means of payment, without any cash, the existence of the CUC practically lost its meaning, turning this currency―as some specialists have mentioned―into a fifth wheel of the car, and not exactly the spare wheel. The new USD stores, in fact, may have made the disappearance of the CUC simpler. Although the above is true, we shall see there are other angles of analysis.

Then, it is most likely that only the CUC would be eliminated, but leaving the stores in USD in operation, with the dual currency remaining. However, the disappearance of the CUC can be done under a very simple variant, which would practically leave almost everything as it is; or under a more complex, but necessary and transcendental variant.

The first variant―in addition to the monetary duality remaining―can leave the exchange duality or multiplicity in force, persisting the existence of various exchange rates. In other words, in the face of this variant, there could continue to be an official exchange rate (1×1 as at present, or another such as 1×10 CUP, or 1×20 CUP), plus another exchange rate for the  population’s operations (the current CADECA of 1 USD per 24 CUP, or another value as of the date of the measure), plus the multiple exchange rates that exist for various operations (wages of workers of joint ventures, or of the Mariel Special Zone, or for the farmers who sell their productions to tourism, etc.).

Faced with this first variant, the disappearance of the CUC would be very simple, but the same complications and distortions that the national economy presents today would continue to exist to measure its results, to encourage exports and discourage imports, etc.

The second variant of the disappearance of the CUC can be accompanied by the elimination of the exchange duality, starting to create a single exchange rate for all operations in the country, whether of enterprises, individuals, or farmers selling to tourism, or workers in the foreign investment sector. It is a much more complex variant, but it is the implementation of this variant that economists demand and defend, and the one demanded by the national economy.

This second option implies a review of prices, wages, various mechanisms of the economy’s functioning, including monetary policy aspects (for example, the periodic calculation of the most recommended exchange rate and others), the probable establishment of stores for various markets (or varied purchasing power) even if all charge only in CUP, etc.

Said variant could also give rise to many enterprises not being prepared to withstand this devaluation of the Cuban peso, planned adjustment mechanisms being necessary, even if they were temporary, so that the process is not so painful for many enterprises and the workers who work there.

Another aspect to be analyzed has to do with the complaints already heard today from a great many citizens, about the existence of stores in USD and the fact that not all the population receives family help from abroad, in a scenario where CADECA no longer sells freely convertible currencies to the population. If the exchange rate unification works well and the national economy reactivates, the stores in CUP should satisfy the basic needs of the population, without the population needing to buy USD or Euros to shop in stores in USD. However, that cannot yet be guaranteed.

So, or there would have to be stores in CUP of different prices (something like the parallel market of the 1980s) to guarantee that with the national currency some difficult-to-access merchandise could be purchased in the rest of the stores in CUP, even if it was not by everyone; or once again CADECA should sell some amount of USD to the population, even if it was in limited and controlled quantities. Incoming USDs in CADECA could serve to establish this measure, leaving the collection in freely convertible currency only, or mostly, through the mechanism of the stores in USD.

Neither of these two variants would mean that everyone could easily buy all kinds of merchandise in CUP, or acquire any amount of USD in CADECA, nor would it mean a drain on the freely convertible currencies attracted by the country, but it would give a partial solution to the demand by people who would not have ways to receive family assistance, nor would they wish to break the law by going to the informal foreign exchange market.

Although the existence of stores in USD has been approved by a real situation of loss of convertibility and purchasing power of the CUC, added to the tensions of external liquidity of the country, U.S. pressures and the need to increase the income of freely convertible currencies, the good news may be that these stores in USD, paradoxically, can even help the exchange process. And for many, if the exchange rate unification is accepted, this would be one of the most complex issues in the entire required unification process.

Why can these stores in USD help with this process? Because the process of purchasing imported products, selling and replacing new imported products would not be mixed and affected by possible inflation in CUP, or the growing money supply in CUP. Because the commercialization in these stores can be seen separated and analyzed almost as an export, if we take into account that the sales would obtain resources obtained mainly from remittances from abroad and other external sources. In other words, the positive or negative signals that the market gave, after the elimination of the CUC and the elimination of the exchange duality, would not affect the operation process of the stores in USD in one way or the other.

Rather the opposite: stores in USD could become an attraction for enterprises in the national economy to direct part of their productions to that market, obtaining foreign exchange for the acquisition of raw materials, inputs and investments for the entire production process, without being involved in complicated efforts to achieve real exports abroad.

Likewise, the government could enter into analyzing and approving the operation of more complex economic instruments, knowing that behind it is a separate “oasis,” which still operates under mechanisms already known and proven in practice.

In other words, the current theoretical discussions of whether first both monetary and exchange unifications are necessary to carry out other economic reforms could be temporarily relegated. Or if it is necessary to first carry out some economic reforms (such as the approval of the law on enterprises, including the approval of SMEs and the greater autonomy of state enterprises to manage their finances; revision of the price mechanism, which enables giving signals to production incentives; or the permanent control of the USD/CUP exchange rate; etc.), before implementing the monetary and exchange unification.

Once again we could be in the presence of something unique: a currency duality (CUP and USD), but with a single USD/CUP exchange rate for all types of operations, giving room for trial and error, reforms and adjustments, all this within the national economy, but having a trapeze artists’ safety net, which lies in the existence of a network of stores to attract the family remittances in freely convertible currency, meet the needs of a large part of the population and at the same time channel the profits in freely convertible currency for the good of the other national economy.

Of course, that doesn’t mean that I advocate the permanence in time of this monetary duality, or those stores in USD. I simply mention that their mere existence could help make it less complex to carry out, gradually, the monetary and exchange unifications, step by step and at different times, being able to measure the results of the measures adopted, without affecting all the aspects to be taken into account in a total process of unifications of all kinds.

Life will tell, hopefully soon, which path will be taken.

This article was originally published in Progreso Semanal.