The governor of Havana, Reinaldo García Zapata, said in a television appearance that the decision was made because “it has not been possible to contain the spread of the epidemic in the city,” where there is a worrying spread of infections, with cases in the city’s 15 municipalities. 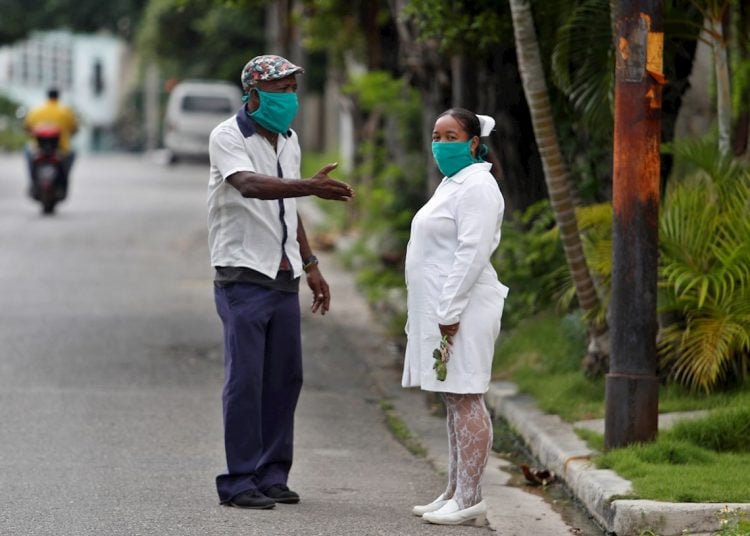 A man and a health worker, wearing masks, were registered this Thursday while talking on a street in Havana. Photo: EFE/Yander Zamora.

The Cuban authorities extended for another fifteen days the strong restrictive measures decreed to contain the outbreaks of coronavirus in Havana, which were initially going to be in force from September 1 to 15 and will now remain until the 30th of this month.

The governor of Havana, Reinaldo García Zapata, said in a television appearance that the decision was made because “it has not been possible to contain the spread of the epidemic in the city,” where there is a worrying spread of infections, with cases in the city’s 15 municipalities.

Havana, considered the Cuban epicenter of COVID-19 since the beginning of the pandemic last March, had to cancel its reopening earlier this month due to several outbreaks that spread to other regions of the country, which already has a total of 4,593 confirmed patients and 106 deceased.

The measures in force since last September 1 in the capital are the most severe applied since the beginning of the pandemic, and include a night curfew between seven in the evening and five in the morning, the paralyzation of public transportation, the increase in distance work and maximum restrictions on entering and leaving the city, which has been cut off from the rest of the country.

Classes are also suspended at all levels of education, plus high fines for noncompliance with hygienic sanitary measures and carrying out legal proceedings against crimes of illicit economic activity, hoarding and speculation, in the midst of a serious crisis of shortages.

Governor García Zapata announced that in order to reverse the health crisis in the new time period, some restrictions will be intensified.

In addition, he indicated that measures related to bank offices and exchange houses will be adopted, where concentrations of people have multiplied in recent days due to insistent rumors about an imminent reunification of the two currencies that circulate in the country.

These lines, which often become crowds, are added to those that have been taking place for months in front of state stores that sell food and basic products, which are increasingly scarce except in the new stores that sell these goods in foreign currency, where they long lines are have also started appearing.

When assessing the COVID-19 situation in Havana in the last 11 days, the province’s director of health, Carlos Alberto Martínez, pointed out that it continues to be “complex” and with “high epidemiological risk” because the disease is affecting its 15 municipalities and maintains a high transmission and increase in the number of positive cases.

Martínez explained that 16 measures have been applied that reflect a trend to control the pandemic and gave as an example that nine municipalities in the capital have managed to reduce the risk of transmission.

In addition, 647 patients are hospitalized: 359 confirmed and 123 suspected cases.

In addition to Havana, which fell back to the phase of “limited local transmission” in August, a month after starting the reopening, other Cuban provinces have also taken a step backwards due to outbreaks, including that of the western Artemisa and the central Ciego de Ávila.