Cuba’s bulky state structure has a parliament with 605 deputies, a Council of Ministers with 17 ministers and three presidents of central institutes, a prime minister and six deputy prime ministers, in addition to an 18-member Council of State. 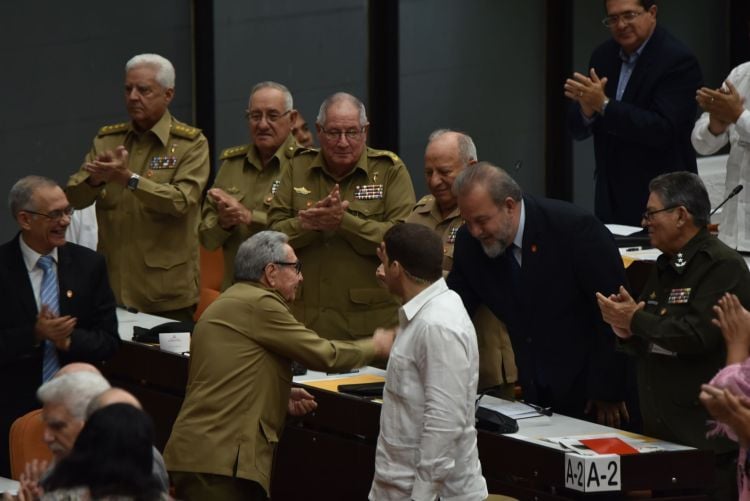 The newly appointed Prime Minister of Cuba, Manuel Marrero, is congratulated by the island’s former president and leader of the Communist Party, Raúl Castro, on Saturday, December 21, 2019. Photo: ACN.

The election of the political system, the forms of government, the structure of the state and the territorial organization are matters freely solved by each country. In some cases, such matters are sources of internal friction, as is the case, among other places, in Spain with respect to the autonomous regimen, in the United Kingdom with the situations of Ireland and Scotland and in Canada with Quebec. The former Soviet Union was divided into 20 states. Yugoslavia and Czechoslovakia were also dissolved.

In Latin America, these issues were settled with independence and due to U.S.-inspired paradigm, democratic and presidential republics were constituted, a scheme whose flexibility made it functional for oligarchies and dictatorships, for capitalism and socialism.

Only two countries in Latin America have prime ministers, Haiti and Cuba, and the latter also has a vice president.

In the Caribbean region, eight countries have the Queen of England as head of state, they have a “governor general” and the executive power is exercised by the prime ministers. Three have an elected president and a prime minister.

In North America, Canada’s head of state is the Queen of England and it is governed by a prime minister.

In Asia, the cohabitation of the figures of president and prime minister is common. In that case, there are 29 countries, in addition to eight monarchies and a theocratic state ruled by an ayatollah and governed by a president.

In Europe, parliamentary systems predominate with elected presidents who act as heads of state, although they lack executive powers, which are concentrated in the prime ministers. In this case there are 34 countries.

In Europe there are 13 typical monarchies in which kings, princes or regents reign, although they do not govern, prerogatives that fall on the prime ministers. There are cases such as Andorra that has a prime minister that performs the function of government, but the head of state is exercised by the co-prince of Sicily and the president of France. Bosnia and Herzegovina have a prime minister and a tripartite presidency

There is the case of the Vatican, the seat of the Catholic Church and for certain purposes considered a state, although it has no government.

In Oceania there are three typical parliamentary republics, that is, governed by prime ministers. They are Fiji, Kiribati, and Vanuatu while Tonga is a monarchy with its own king. Meanwhile, Australia, New Zealand, Solomon Islands, Papua and New Guinea have prime ministers and the head of the state is the Queen of England.

Cuba, the only Marxist-inspired socialist country in the West, has just completed the remodeling of its state architecture, which has led to the adoption of a new Constitution, which maintains the role of the Communist Party as the leading force of society and the state, and has restored the positions of president, vice president and prime minister of the republic, setting up an atypical situation not comparable with any country in the region.

Cuba’s bulky state structure has a parliament with 605 deputies, a Council of Ministers with 17 ministers and three presidents of central institutes, a prime minister and six deputy prime ministers, in addition to an 18-member Council of State. To this classification are added the departments that form the judiciary power and the provincial divisions that, to some extent, with the figure of the governor, at scale, reproduce the national state structures.

The dimensions of the Cuban state apparatus respond to the search for full citizen representation, according to territories, gender, ethnicities and professions, as well as to the state character of most of the economy and to the planned and predominantly vertical way in which the leadership of all social activity operates.

The adjustments in the Cuban state structure seek a greater efficiency of the institutions and the government as a whole, with special emphasis on the economy’s performance, a more prominent participation of the population and the democratization of political and social processes. Putting all this into practice has the last word. See you there.

* This text was published by the Mexican daily !Por esto!  It is reproduced with the express authorization of its author.

Central Bank of Cuba: cash can be drawn from accounts in dollars…when dollars are available