Learning how to be a dad 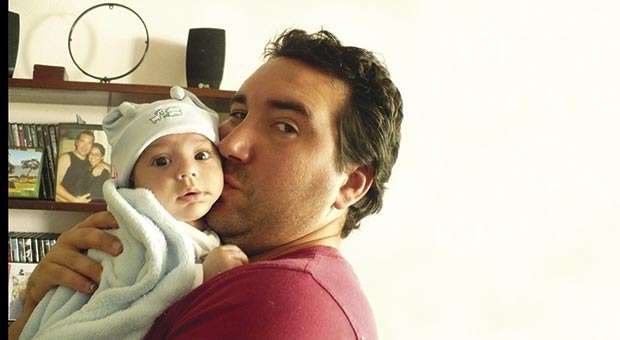 The first time that I saw my son smile, I broke into tears. He was 51 days old, and he was looking at me with his big curious eyes from the bassinet in the hospital where he had just undergone surgery, as if to say to me, “Easy, Dad, I’m your little champ….”

My baby had an inguinal hernia, a common condition that is easily cured with a simple operation. But nothing is simple when you’ve just come to this world and you’re already on your way to an operating room under general anesthesia. That night I learned about fear, but also about a father’s love, which is not just any love, as they say….

Paternity has completely changed me, even though I’m basically still the same, with more bags under my eyes and somewhat unshaven. All of a sudden, I’ve become someone with a one track-mind. I used to argue about baseball, journalism and food, but now everything comes back to the baby. And when people ask how he’s doing, I tell them that he’s “out of this world,” even though he’s barely arrived….

Now that my son is here, I’ve discovered that there is nothing more painful and exhausting than his crying; that sleeping for five hours in a row is a luxury; that in the toil of washing diapers, you even become fond of his poop; that I have to be strong in face of the enormous possibility that he will become a fan of Havana’s home team; and so on…. Every day he gives me another reason to love him, even though I love him for free anyway….

Raising this kid gives me the same anxiety as facing a blank sheet: I don’t know exactly how to begin. I have many ideas but am certain about few of them; nobody is born knowing. Being a dad makes me love my own dad more. It is from him, above all, that I have inherited moral values that I will pass on to my son, even if they seem old-fashioned, like being honorable.

And given that communication is the key, as they say, we are now beginning to give our first little sermons. I let forth with whatever silly thing that occurs to me, in a drippy voice, as if he would understand me that way. He looks at me and laughs with his mouth and eyes, gurgles a tender “agu-agu” that melts me and brings a quote from José Martí to mind: I think about how everything that I have done until today, and that I will do, is and will be for him….

Cojimar and its Old Men