“Cuban cuisine is the max for me” 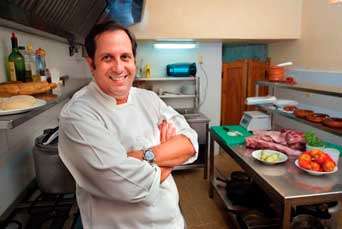 What type of cuisine most inspires you, what’s your paradigm?

The cuisine I use most as a reference is the type of cooking done in Cuba’s backcountry. With very few ingredients from which to choose, very few resources, and without any technology. That does not mean that Cuban cuisine is limited to what is done in the countryside; that would be erroneous. Sometimes, when we talk about Cuban-style service, or campesino-style, it is framed in that sense alone, and that is not exactly the case. What the large landowners, or aristocrats, used to eat in 17th and 18th-century Havana was very different from what was eaten in the countryside. In those big mansions, the slaves did the cooking. They made what their masters liked, but they also had an influence, added their touch, and that created a type of fusion in the cooking. Afterward, those slaves passed that on to the family. And when slavery was over, those recipes took other paths, and lasted until today.

Season the pork tenderloin with salt and pepper and brown lightly in a frying pan. Sautee the sliced garlic in olive oil and when it begins to turn brown, add honey and mustard. Mix well and cook for 1 minute over a low flame. Add pork tenderloin and finish cooking it in this sauce. Serve within 3 minutes.

This dish may be savored at El Ajiaco restaurant, in Cojimar.

*Chef Ángel Rafael Roque Gómez (b. April 1975). Earned a degree in Tourism in 2008. Graduated from the Sergio Pérez school as a professional cook in 1999. Now works for two restaurants: the Habaguanex company’s Café del Oriente and the Café Ajiaco in Cojímar, which he co-owns with chef Carlos Fuster Pérez.

Out in the sun

AltaHabana: where houses are not little boxes