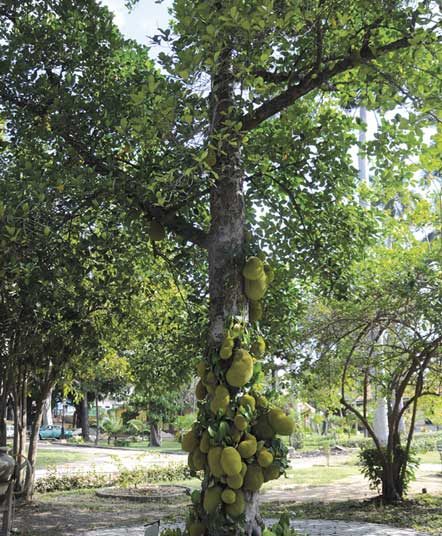 Ensuring that green spaces are part of the historical district’s restoration project is one of the premises of the Havana City Historian’s Office, which has gone beyond its usual boundaries and returned splendor to many parts of the city. That is why the Quinta de los Molinos has been undergoing changes for several years now as part of that project, bringing renewal to this park and its very important historic, patrimonial and environmental features.

Spreading over 4.8 hectares (about 12 acres), the Quinta de los Molinos adjoins three of the capital’s municipalities: Centro Habana, Cerro and Plaza de la Revolución. It borders on the south with the Avenida Salvador Allende  (formerly Carlos III); on the east with Calzada de Infanta and the Cayo Hueso neighborhood; on the west with Avenida de los Presidentes and the University of Havana, and on the north with the El Príncipe neighborhood. The park takes its name from a tobacco mill that operated on the site, although the word for mill is plural (molinos), because the milling mechanism used two cogged wheels. The mill was built by royal decree and operated from 1800 to 1835, powered by the waters of the Zanja Real, Cuba’s first aqueduct system.

Once the mill was defunct, the city’s Botanical Garden was moved there, as was the vacation home used by Cuba’s colonial rulers, the captain-generals. The Botanical Garden was the site of research on plants and animals conducted by the illustrious Cuban scientist Felipe Poey Aloy, and numerous experiments with sugar cane conducted by Álvaro Reinoso. And in 1906, its grounds were registered as a place of reference in the World System of Botanical Gardens. The Quinta de los Molinos was the residence of General Máximo Gómez, father of the Cuban independence movement, and it housed Havana’s botany and secondary schools, along with the Máximo Gómez Museum. Today, the Jardín Quinta de los Molinos, which has been a national monument since 1981, is benefiting from the ambitious restoration project of the City Historian’s Office and a community environmental development program run by the Sociedad Patrimonio, Comunidad y Medio Ambiente (Patrimony, Community and Environment Association).

The idea is to make the Quinta de los Molinos into a cultural park that will serve surrounding communities, as direct beneficiaries of this project aimed at promoting environmental education for the city’s population. With a wealth of plant life with a predominance of arboreous species, followed by herbaceous and shrub-like species, as well as wild fauna, the Jardín Quinta de los Molinos is also the site of a number of activities designed to serve vulnerable groups, such as children, women, people with disabilities and seniors. It is a place for biology research and the development of environmental education for its visitors.

The community environmental development program also comprises the design of scientific and technical information services, courses and workshops, and cultural activities. It has a Community Environmental Information Center and an environmental classroom, the Pabellón Cultural; eco-trails; exhibits on mini-ecosystems; hatcheries, ponds, fountains and aquariums, and an Environmental Education Development Center, with a projection room. One workshop is the Años Altos (“upper years”), whose participants are retired gardener/artisans who create useful items out of living and dried plants obtained from pruning and other cultural work involving the land and flora of this emblematic park. With the objective of encouraging people to learn about aquatic ecosystems and environmental protection, the Quinta organizes an Aquarium Festival every year, where professionals and amateurs decorate aquariums that are displayed on the grounds.

While not all of its areas are accessible for visitors, this past summer the Quinta de los Molinos was added to a list of sites that comprise the Rutas y Andares project, guided walks that are organized by the City Historian’s Office. Dozens of families enjoyed the park’s historic heritage and natural riches, which include some 170 plant species, some of them endemic Cuban flora, and more than 66 species of wild fauna associated with the park’s plant life, including mollusks, amphibians, reptiles, birds and mammals. As part of this successful public program, expert guides led groups through the park’s trees; its ornamental, ecological, and orchid gardens; its nurseries, ponds and fountains, and its dovecot and animal exhibition areas.

As a place that is especially designed for nature-lovers, this green space in Havana will soon be restored to its full splendor. It will be like an oasis in the hustle and bustle of the city, which little by little, is surprising us with the rebirth of places full of history far beyond Habana Vieja, where the most concentrated efforts are underway to restore its beauty.

Havana is a state of mind