The reorganization train started running and stopping it would be more expensive, but it is also true that the track on which it is traveling is not in good condition. 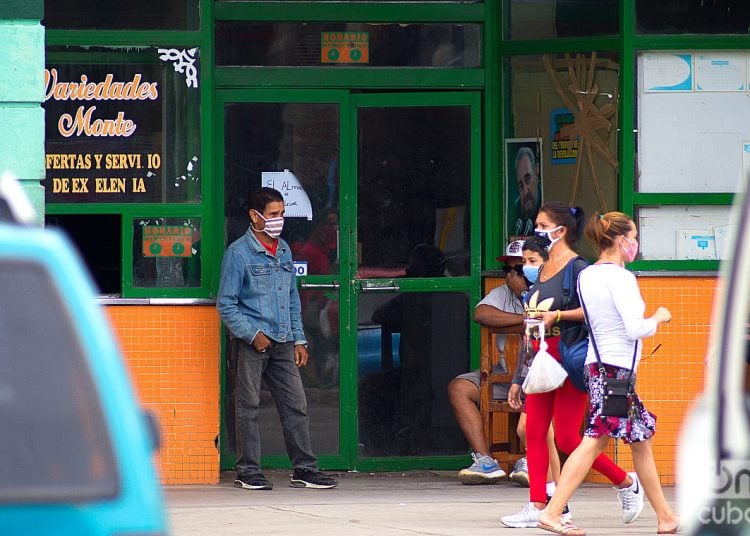 If anyone ever doubted the telluric nature of the exchange rate and monetary unification, this week, the first after the famous Day Zero, has been enough to show how intense the earthquake is and will continue to be. If the aspiration is to produce the effects that a devaluation should produce in the real economy, well then, it will be necessary to prepare for the many aftershocks that have yet to appear and that will necessarily occur. What is happening today in the economy and society, and even the way in which people begin to perceive the advantages and disadvantages of the happiness of living with a single currency, affects the pocket, the stomach and the mind. And they do so with a depth never seen before.

The “intensity of the earthquake” is associated with many factors, but there is one that should be highlighted. Currency distortions are not the product that dollarization was adopted one day, back in the 1990s. They come from further back, since our country kept the exchange rate of the CUP with the US dollar unchanged, something that happened in the early sixties. They also go back to the fact that the tax system was charged with the task of absorbing the created distortions.

In those times, and thanks to the fraternal and solidary help of the Soviet Union, the distortions could be assimilated “painlessly.” That generated a “special” way of doing and thinking the economy, which, although it may seem incredible, even in some cases and in some minds, accompanies us. That story, no matter how much it is told, is already impossible to change, just as its consequences cannot be changed. But it is always good to put the earthquake in context.

In agriculture, prices for producers do not meet their expectations. In some products, to reach the break-even point (that moment when the profit is zero, but the costs incurred to produce a certain product are settled), the returns of the producers would have to be multiplied by two. This is very difficult under conditions of scarcity of inputs and with the rise in the prices of others (for example, daily wages), which makes it difficult in economic terms to substitute herbicides for the hoe. I draw attention to this because we are not in the conditions of a 100% substitute market.

The 2021 budget contemplates a transfer of 1,672.4 million pesos as a temporary subsidy to the collection price for producers, but this may not be enough. Or perhaps we can start by accepting something false and thinking, unlike what happens in the rest of the world, that it is not necessary to subsidize agricultural production.

EU to grant in 2020 direct agricultural subsidies worth 40 million euros.1

European agricultural producers―totaling around 10.5 million exploitations on an average of 16.6 hectares each―will receive this year subsidies from the EU member states for more than 40 million euros, according to a report by the World Trade Organization.

These subsidies become effective under the format of “direct payments,” by virtue of the aid regimes included in the framework of the Common Agricultural Policy.

Direct assistance is one of the windows for the subvention of EU agricultural producers to boost their production, protect the internal market and encourage the sector’s exports.

The destination of this subsidy are decisive products, because most have a direct impact on the diet of the population.

It seems to be out of the question that the subsidy for food production is something by no means minor, necessary even where productivity and efficiency levels are almost paradigmatic.

But there is still a lot of room in agricultural production in Cuba, before reaching the efficiency frontier for current levels of technology and resources. In some way, it is shown by the producers who, with the same difficulties that everyone suffers, achieve higher yields.

There are also many obstacles to eliminate in this sector, including the existence of organizations that survive in the production system and that mediate without providing any added value and appropriate a part of the income of direct producers. Why should a producer give a part of his total billing (around 8%) to a Credit and Service Cooperative (CCS) if he has not voluntarily asked for any services? Why, if the CCS does not help him or what it contributes to him is marginal and dispensable; if the CCS collection “work” is delayed and inefficient in many cases? What does the producer earn? What does the final consumer gain? What does the country gain? How many other meetings does it take to remove that obstacle?

It is true that the “reorganization task,” among other things, will allow management to be transparent in order to know what should be subsidized and what not, where should the subsidy be placed in the process and who (producer or consumer) is more convenient and coherent to receive it. Now that path is being taken, which is also a learning process, and which will require rectifications.

It is also true that, from a global perspective, Cuba allocates a significant part of the budget to transfers to the non-budgeted sector (13%). 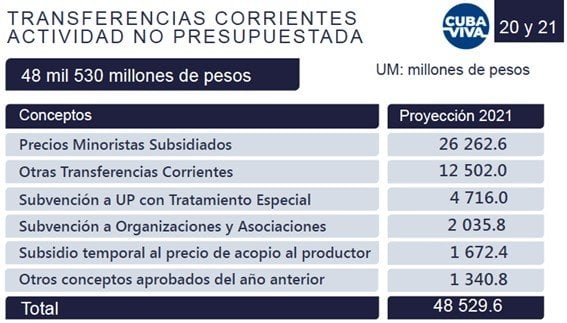 Subvention to UP with special treatment

Subvention to organizations and associations

Other items approved from the previous year

These transfers today represent 56% of the fiscal deficit of 2021, a significant amount that demonstrates the effort and stress to which the national economy is subjected.

It would be good to know the following: what are those other current transfers that receive almost a quarter of the total? And what organizations and associations are those that receive more resources than those for all the people’s food?

There is also another 18 billion CUP in reserve to support the business system. I don’t believe any part goes directly to the farmer, or to the state agricultural enterprise, except 1,800 million destined for working capital, through banking services for agricultural development.

The tracks on which the train has started running are not the best; they will have to be repaired and readied to reach the necessary speed. Doing so is also part of that task and will also produce telluric effects.

There will be multiple aftershocks and they will extend over time. Learning will have to have a certain speed. The obstacles already identified should be eliminated in a summary trial.