The knee on George Floyd’s neck is not an individual act, it is the weight of a political system in which Afro-Americans, in addition to being poor and discriminated against, first appear as a criminal suspect than as a good citizen to protect. 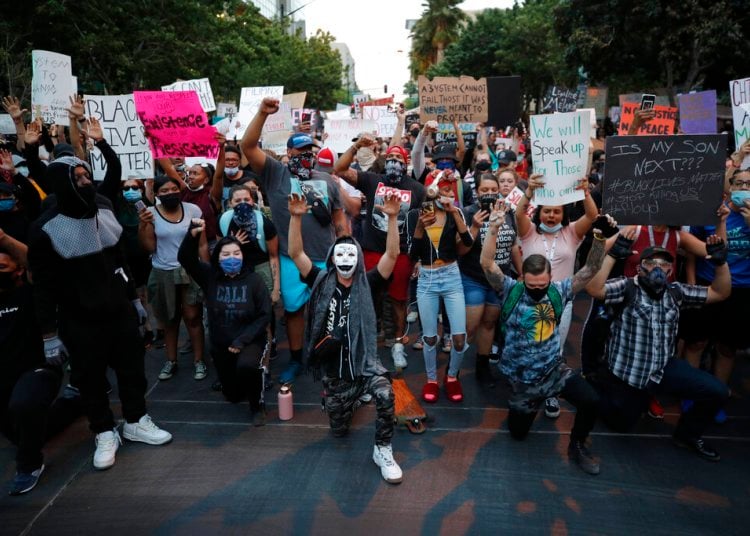 Demonstrators protest in Las Vegas on May 30, 2020 over the death of George Floyd, a black man who died of suffocation while in police custody on May 25 in Minneapolis. Photo: John Locher/AP.

The events of the past week in the United States, beginning with the death of Afro-American George Floyd by police abuse in Minneapolis, are generating concern and analysis throughout the country, and in the rest of the world. Beyond demanding justice in the Floyd case, the protests express rejection of a system with various levels of citizenry and inequalities regarding their protection and the application of justice.

In the midst of so many social network contesters in which Tyrians and Trojans use police violence and that of the protesters to fuel their ideologies, it is convenient to reiterate a set of convictions at the center of the traditions that have made the United States advance, like the great country it is. Those convictions are central to the republican and democratic culture to which it is convenient to return:

1- Discriminatory treatment of minorities as an institutional pattern constitutes a structural injustice that denies the citizen equality enshrined in amendment XIV of the constitution. The policeman’s knee on George Floyd’s neck was not an accident by an official, nor was it by chance. Addressing the structural causes where this institutional discrimination originates must be a matter of citizen integrity and decency. Returning to order cannot be returning to that normality. The rejection of police violence and its patterns of racial discrimination need to be at the center of the electoral campaign that is beginning.

2- The right to civil protest is an essential component of the United States’ republican and democratic order. Expressing dissent in the face of abuses by the government or its representatives has been an American tradition since the declaration of independence. That said, democracy is not based on the disturbance of the crowd in the streets or squares, but on their orderly participation in political institutions. All the respect that peaceful protest deserves does not justify violence against order, property and people. Condemning that violence, and the radical agitators and provocateurs, right and left, who encourage it, is also a matter of citizen integrity.

3 – To demand as citizen culture the condemnation of violence by radical protesters as well as that of the police does not imply addressing the issues as equivalent. Police violence is structural, institutionalized. It is directed against the life of a segment of the citizenry and permanently limits their freedom. In the second case, it begins with attacks on property, which, important as it is, to live civilly in a state of law, is not the same as an institutional attack on life.

There is considerable statistical evidence on the institutional nature of violence and discrimination. Randy Balko endorses in The Washington Post several studies with marked differences against minorities in terms of police persecution. If seven out of ten white people believe that the police authorities exercise force with justice, only one of three Afro-Americans think so.

In the book “Suspect Citizens”, political scientists Baumgartner, Epp, and Shoub study how the police treat their citizens, using data from 20 million stops for traffic violations in North Carolina. Traffic violations are the most frequent interaction between police authorities and citizens. The study found that Afro-Americans are twice as likely to be stopped for this than whites, despite the fact that, on average, the latter drive more. Once stopped by the police, Afro-American cars are searched four times more. Although Hispanics in North Carolina are stopped as much as whites, once stopped, the probability of being checked increases significantly. These disparities increase with gender (men more than women) and age (the younger, more stops and checks).

The rest of the social, economic, prison population and political participation indicators show that racial inequality between whites and minorities is overwhelming. In the wake of the current COVID-19 pandemic, it is also evident that Afro-American and Latino minorities have been the hardest hit in numbers of deaths, illness, loss of income and employment. In Chicago, a city that is thirty percent Afro-American, that group’s deaths from the pandemic have been seventy percent. The unemployment rate among Afro-Americans was twice that of whites before the pandemic, with no hope that it will change. A third of Afro-American children are born into poverty, while (just as unfortunate) twelve percent of white children, in the richest country in the world.

The fact that notable progress has been made in a country that has already elected its first Afro-American president and that such discrimination is not legal as it was at the time of racial segregation does not make it any less real. It must be addressed.

Police abuse is the ultimate expression of that discrimination, with clear historical origins. Discussions on TV by experts, even when addressing foreign policy issues, assume a policy of giving crumbs in addressing the legacy of slavery and the Anglo-Saxon occupation of the southwest after the 1948 Mexican-American War. The knee on George Floyd’s neck is not an individual act, it is the weight of a political system in which Afro-Americans, in addition to being poor and discriminated against, first appear as a criminal suspect than as a good citizen to protect.

Let’s recall that Colin Kappernick’s gesture, going down on one knee, peacefully, not on anyone’s neck, but on the ground of American football stadiums, was precisely against police violence. What was the government’s response? President Trump carried out a campaign in which, far from recognizing the merits of the protest, what he tried to do was mobilize club owners against the players, describing them as unpatriotic. What was the NFL’s response? Leaving Kappernick without a contract. What was the attitude of the public? The opponents of Kappernick returned to the stadiums, when he was expelled. Those who supported his protest kept going. Those winds of indolence sowed these storms of protest. 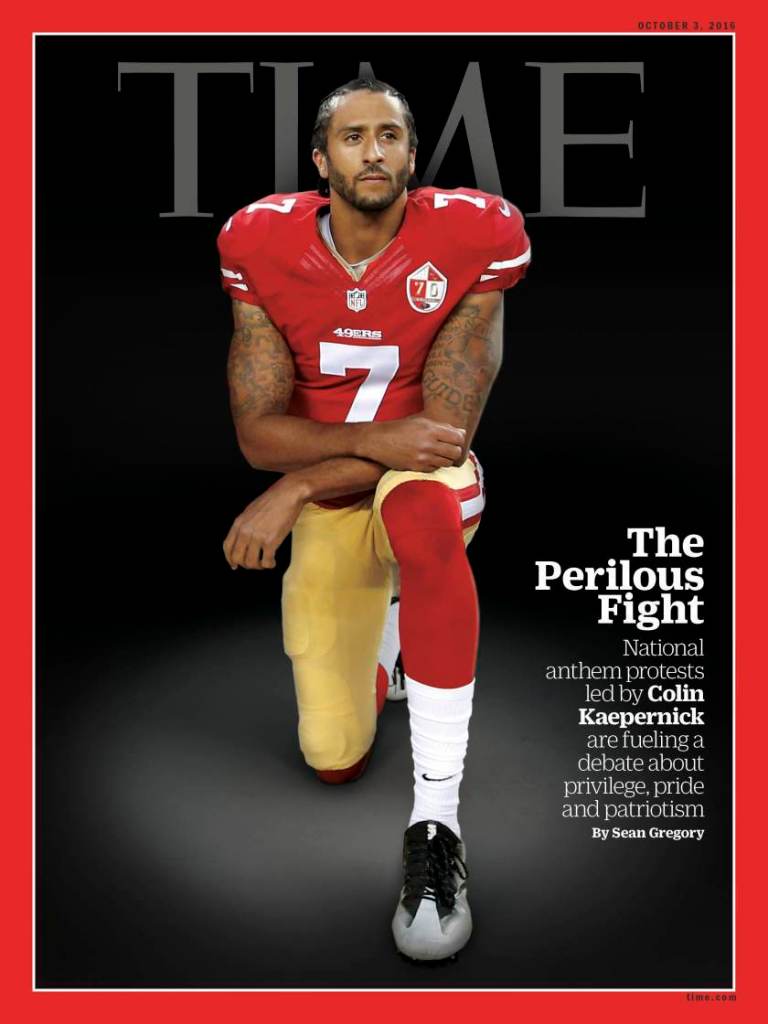 “A riot is the language of the unheard,” said Martin Luther King.  Repeating the mantra of the supposed equality of opportunities is not going to make it real if policies and resources are not dedicated to creating a platform of equivalent access to health, education and a minimum wage. Isn’t it time to speak in a country as developed as the United States, for example, of a universal minimum wage, an idea proposed in the 1970s even by Richard Nixon? Isn’t it time to have a sensible discussion about the need for equal access to health and education as an essential condition for full citizenship? Why continue to stigmatize as radical and utopian the search for a system of universal health coverage, which has clearly produced better results at lower costs in most developed countries? Of course, that costs taxes and budgets. It’s also hard to cope today with the disgraceful cost of lives due to the pandemic, job losses, political, institutional and protesters’ violence.

None of the above, however, implies an uncritical attitude towards the excesses of a minority of the protesters. Those behave like criminals, sometimes of their own free will, others under the influence of agitators and provocateurs. The cause of progress and civil rights are not served with acts of destruction that, in the first place, harm communities where there is violence. The solutions to the problems of racism are not found in the blindness of destruction but in the construction of a new normality.

The advance against inequality is not the fruit of the hopes of the impatient radical, but of the use of protest and negotiation based on historical experience. Isn’t there already enough evidence to understand the psychology of President Trump, and how he has always won in the blowing ill winds of polarization? Isn’t there enough evidence of the Republican Party’s so-called southern strategy victoriously invoking law and order, with well-calibrated racist whistles from Nixon to Trump, and from Bush and his campaign manager Lee Atwater? Isn’t it already evident that the Republican Party’s strategy is to present Democrats and their candidates as the branch in the United States of left-wing radicalism, with no room to discuss the experiences of the welfare state even with its own European allies? The unabashed condemnation of those who have turned peaceful protests into violent ones is not only a matter of citizen ethics but also instrumental reason.

Why are the two condemnations not the same? Because the levels of citizen responsibility are different. An objective and reasonable policy is not equivalent to a diagonal in a parallelogram, half distributing responsibilities. The violence of radical protesters against property and wreaking havoc in our cities is their sole responsibility. They have not received any mandate from society. These provocateurs and professional agitators of an unfair opposition seek to make the United States do poorly so they can do well, at their own risk.

That is not the case with institutional violence. That’s by the government, by law enforcement, it’s in a certain sense ours. Most Americans have not elected white supremacists or anti-capitalist radicals. They don’t have our mandate. Another is the case of racial inequality in opportunities, deaths from the pandemic, and police abuse. Citizens have given a certain level of consent for the actions of the authorities that reproduce and exacerbate these problems. Police officers who abuse minorities collect their wages from our taxes. The elected officials or delegates who establish social welfare plans or even police behavior in an arrest situation are not vigilantes implementing their own ideas, they are our representatives.

President Trump doesn’t do justice to the dignity of his office, setting fire with rhetoric to a handsome neighborhood. To speak of “vicious dogs” and that the looting will be answered with shots, is an insult to the country’s highest magistracy. In the United States, the president is the head of government, but in times of crisis he is, first of all, the head of state. The institutional leader of all citizens, not just those who voted for him. The president has chosen to escalate the confrontation, creating more problems for everyone, even for law enforcement, who are mostly worthy professionals, wanting harmony in their communities.

The first lesson from these riots in an election year is citizens’ importance in the functioning of democratic institutions. “A republic, if you can defend it,” was Ben Franklin’s answer to those who at the gates of a constitutional convention asked him in Philadelphia about the type of government they had created. Several of the Afro-Americans’ deaths and the disasters of the protests could have been avoided had those who, for months, have peacefully denounced the issue of police violence and racial discrimination been paid attention to.

A line of responsibility can be drawn from ignorance and punishment to Kappernick’s kneeling on the ground, to the abuse of the police officer’s knee on Floyd’s neck. Indolence in the face of others’ pain, and the deaf ear in the face of the peaceful protest, has ended in a loss for the republic, for all.