Its objective is to improve food and nutrition security, and increase the stability of local food production systems, employment and access to water. 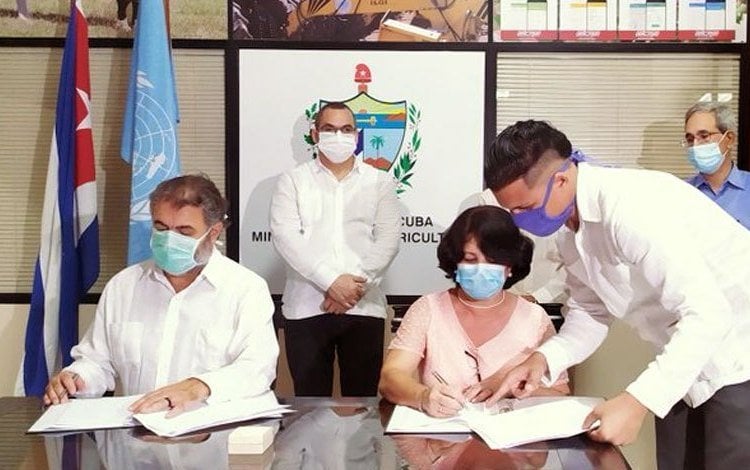 Cuba and the United Nations Food and Agriculture Organization (FAO) signed an agreement for the execution of a project to confront climate change for an amount of 119 million dollars. It will benefit vulnerable communities distributed in three of the island’s provinces.

The Ministry of Agriculture (MINAG) and FAO designed the project approved at the Board of the Green Climate Fund (FVC), held in Geneva, Switzerland, according to the Agecia Cubana de Noticias (ACN) news agency.

The FVC will contribute 38.2 million dollars, while the Cuban government will contribute 81.7 million in co-financing for a project that is the first in the nation supported by the Fund, and the fourth jointly formulated with the FAO in Latin America and the Caribbean, approved by that international financial mechanism.

The initiative “Increasing the resilience of rural families and communities to the climate through the rehabilitation of productive territories in selected localities of the Republic of Cuba,” will be implemented in seven of the municipalities most vulnerable to the effects of climate change in the Cuban provinces of Matanzas, Villa Clara and Las Tunas.

Its objective is to improve food and nutrition security and increase the stability of local food production systems, employment and access to water.

For seven years, the project will seek to benefit 240,000 people and mitigate the emission of around 2.7 million tons of greenhouse gases, working with 52,000 farmers and their families, of whom 25,000 are women.

The FAO representative in Cuba, Marcelo Rasende, considered that the signing of the agreement, amid the complex situation of COVID-19, shows the commitment of the Caribbean country to boost investments in the agricultural sector and develop sustainable food systems with a high resilience capacity to weather events.

For this project, investments will be made in technology, machinery, equipment and resources to rehabilitate productive landscapes, through agroforestry systems, reforestation and assisted natural regeneration.

Cuba was one of the founding nations of FAO, which emerged in 1945, but it was not until February 1978 that the specialized UN agency established an official representation in Havana.

In 2015, the FAO revealed that it had provided financing to Cuba in the amount of between 65 and 70 million dollars, for projects to assist agronomy and food.

In 2017, the agency activated a special emergency fund to assist in the rehabilitation of agricultural and fisheries production in Cuba, in order to alleviate the damage caused by Hurricane Irma.