A few hours ago, the President of the United States announced that his government would suspend support for the WHO and threatened to withdraw special treatment for Hong Kong. 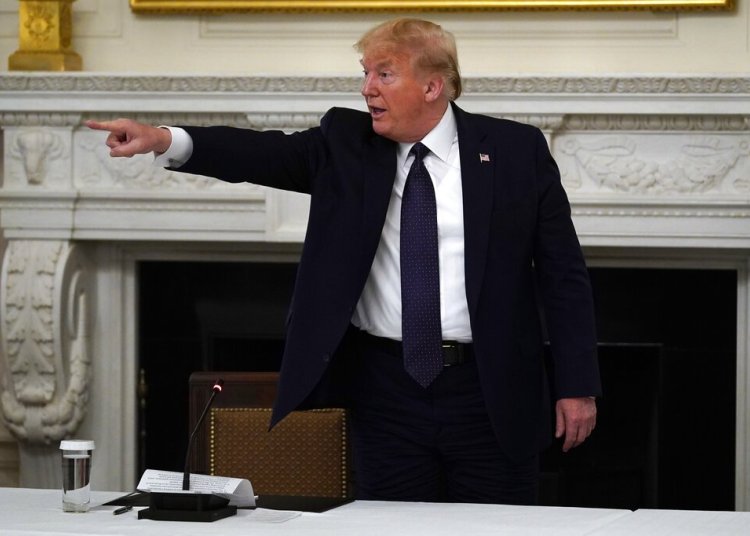 It’s all too obvious that President Trump’s latest cavalry charges against the WHO and against China converge on the same common denominator: the search for a scapegoat for the 100,000 Americans killed by COVID-19.

Although most of the analyses on the United States today boil down to presidential teratology exercises; and although some observers still try in vain to string together a strategic guideline in U.S. foreign policy, neither the science of the monsters nor the general theory of imperialism offer a rational explanation for his administration’s logic. Paraphrasing that electoral campaign strategist of candidate Bill Clinton in the 1990s, the key would be summarized in something like “politics, stupid, politics.”

European imperialism’s enclaves in East Asia known as Hong Kong and Macao were returned to the sovereignty of the People’s Republic of China (PRC) in 1997 and 1999. Like the U.S. naval base in Guantánamo, they were born from a time when China had been subject to British and Portuguese rule, along with the Portuguese possession of Formosa (or Taiwan). Unlike the naval base in eastern Cuba, both had been geopolitical posts that quickly mutated into commercial emporiums. Far removed from London and Lisbon, they were legally based on treaties signed in 1898 (the same year that the Marines occupied the entrance to the bay of Havana) whose expiration clause was set at 99 years (unlike Guantánamo), and that the PRC claimed, after arduous negotiations, in 1997 and 1999.

To the extent that economic and commercial reason prevailed, their effective return to Chinese sovereignty came under a typically Confucian formula: “one country, two systems.” This means that both cities are governed by special legislation, which preserves established economic and commercial practices, and ensures a special banking, monetary, customs, immigration, fiscal, tariff system, and even public order and security, organizations and communication media other than that in force in mainland China. Thanks to this special regime, which maintains mutual visa exemptions for Americans, citizens of Schengen countries, and the 7.5 million residents in the enclave, as well as free exchange between Hong Kong and American dollars, Hong Kong’s trade balance with the U.S. is estimated at more than 30 billion dollars a year.

If Trump’s threats were to come true, evident damage is expected for the interests of the PRC, but even greater harm to American companies and their partners, especially exporters. In fact, until the time of writing these notes, the immediacy and scope of the measures were not clear. Presidential threats include extending the prevailing ban on exports of certain U.S. technologies to China, and suspending all other preferential treatment agreements, including the one on migration and extradition between the two territories. It has not been confirmed, however, whether the tariff war between the two largest economies in the world, which is supposed to have led to a truce, and against which the enclave remained immunized, would resume with Hong Kong. Customizing the punishment, and last but not least the “collateral damage” for all the interests present today in the enclave, Trump has threatened to issue a blacklist of Chinese and Hong Kong officials who would be subject to sanctions. As is typical of this genre of political movie, the predictable Chinese reaction should not be to back down in the face of U.S. coercion, but rather the opposite.

Not surprisingly, the powerful U.S. Chamber of Commerce in Hong Kong has hit the roof, for the possible loss of special tariffs, export control, visa exemption and cooperation in law enforcement, all non-existent with mainland China.

The situation of instability in the enclave, the new Chinese Security Law and the recent U.S. reaction evoke the escalation that took place between Cuba and the United States between 1959 and 1960. Although some commentators still seem to forget that everything on this island of ours began with a very moderate agrarian reform (May, 1959), the chain of actions and reactions led, just a year later, to successive nationalizations, which were not part of any program, but were part of a very palpable war situation. Save for exceptions, both of the United States’ reactions are comparable in a certain political key that the military identifies as the breaking point, and that responds to a reasoning based on the resilience of materials: the art of prevailing consists in adding enough weight to reach that irresistible threshold, based on which the other yields.

The summer of 2019 protests in Hong Kong started because of an apparently minor point, a law allowing extraditions to mainland China, and were directed against local authorities. Although the situation normalized after the elections last November, what happened in those few months revealed a potential danger of instability, both due to the scale and intensity of the mobilizations, which went from peaceful marches to violent actions, as well as the anti-Chinese chorus that arose in the large international media.

The current street protests in Hong Kong respond to a new Chinese national security legislation, and is expressly directed, from the outset, against the PRC government. Although the regulations of this legislation are not intended to curtail the advantageous autonomy of the enclave, but rather to prevent any attempt at secession, subversion and foreign infiltration, the perception of threat to the status achieved has permeated sectors of public opinion, particularly businesspeople and young people, and constitutes an area of ​​political tension and suspicion, not having been enacted by the local government, but by the central government. The prevention of this mainland Chinese government in the face of any attempt to use violence and promote separation from Hong Kong is being perceived as a step towards new regulations that restrict freedom of the press and immigration, the flow of information on the internet, and control of the financial market.

As furious and crazy as it may seem at first glance, Trump’s reaction also responds to a certain method. On the one hand, it is consistent with a pre-existing U.S. concern, aimed at limiting Chinese investments in the U.S. (which could now be extended to Hong Kong-owned companies); on the other, it is based on a consensus already established in Congress itself, where the Chinese control measures over the enclave have been the object of a large number of human rights accusations. In fact, the Hong Kong Human Rights and Democracy Act foresees that each year Congress certifies the probity of Hong Kong autonomy.

That this typically Trumpian reaction―which is not synonymous with absurd―is not aimed precisely at ingratiating itself with human rights organizations, but at being tough on Chinese communism (and its WHO “minions”), in the midst of the electoral battle and the death rate from COVID-19, is clearer than water. That he is going to carry out all his threats in depth is a hypothetical construction preferred by those who seem to greatly forget his bluff with the North American Free Trade Agreement, the promise to host Kim Jong-Un, build a wall against Mexicans, etc.

Ultimately, maintaining the agreement reached with the PRC regarding trade tariffs with the PRC would make decisions on Hong Kong a lesser evil for the U.S. Chamber of Commerce―if they were to come into effect. As for “collateral damage,” there is no doubt, as I noted above, that U.S. exporters are the main affected.

In terms of pre-election political poker, after all, what matters most right now to the U.S. government are the oscillations in the polls. The approval of a new NAFTA, the negotiations on tariffs and the talks with Kim show that everything can be reviewed. “We’ll see later.”

The irony of this whole move, in terms of its political effect on the PRC and Hong Kong’s live forces, by imposing sanctions on it anti-Chinese dissidents in the enclave may objectively lose ground, having sparked a reaction from Beijing, which it could even harden, to the extent that it reacts based on national pride, with consequences for prosperity that, if Confucius lived in the enclave, he would not have given his blessings to.

Regarding the strategic challenges on the PRC’s horizon, with all the damage that these measures―if they are put in place―can cause it, the Trump administration would probably represent the least of them. As sinologist Brantley Womack commented to me a few months ago in Havana, China has its own problems. In a less Confucian environment, as we shared an amber liquid and some ideas about hegemonic nostalgia and the Thucydides trap, he first defined how to achieve―once the Basic Law of Hong Kong and Macao was finalized in 2047―integration of Hong Kong, Macao and Taiwan in a single entity by 2049, the centenary of the People’s Republic.

By then, the Trump administration and its electoral battles will be just a memory.