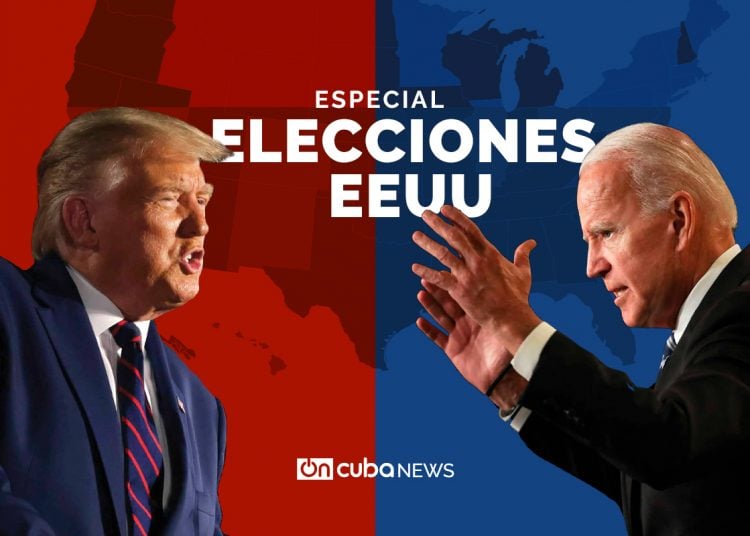 Just a few days before Election Day, Donald Trump and Joe Biden face off in what they predict as one of the highest-turnout elections in U.S. history. Although confidence in the polls declined after Hillary Clinton’s defeat four years ago, according to a Cook Political Report, on October 1 Biden would win the election with 290 electoral votes. According to The Economist, on October 6, 2020, Biden would win with 340 electoral votes.

It will only be known for sure after November 3. But how did the states vote in 2016? How many electoral votes does each state contribute? What are electoral votes and how is the president actually elected?

Elections in the United States 2016 Winning Party by State

To begin answering these questions, we present the following map with the results of the past elections. In each state you can see which party was the winner and how many electoral votes each state contributes.

Swing States: The swing states of the presidential elections in the United States are highly contested states. There the electoral polls do not give a clear advantage to any party. Also, historically these states have been oscillating between the Democratic and Republican vote. This is why they are also known as battleground states, since they are decisive to win elections at the national level. However, swing states can change with each election. A state considered ensured for a party may even start being contested. This is the case of Texas, a Republican fiefdom in which the polls predict a tight result in the 2020 elections. But the paradigmatic example of swing state is Ohio: in the twelve elections since 1972 it has always voted for the candidate who ended up winning, seven for the Republican candidate and five for the Democrat. Something similar happens with Florida: no candidate has managed to be president without winning in this state in the last twelve elections, with the exception of 1992. The swing states are: Arizona, Colorado, Florida, Georgia, Iowa, Michigan, Nevada, New Hampshire, North Carolina, Ohio, Pennsylvania, Virginia and Wisconsin. Furthermore, their size makes some of them very decisive: Florida has twenty-nine delegates, Pennsylvania twenty, and Ohio eighteen.

Electoral victories by state in the last 10 elections Democrat/Republican

Legislative, state, and local elections in the U.S.

In the United States, legislative elections are held every two years. State and local elections occur every year.

The House of Representatives

Senators serve six-year terms. One third of senators are elected every six years, which is why that number of senators (33 or 34) is elected in each Election (both during midterm elections and during presidential elections). There are 100 senators in all, two from each state. To run for the office of senator, a person must be at least 30 years old, a U.S. citizen for at least nine years, and live in the state he or she wishes to represent.

Presidential elections in the United States

Elections for president of the United States are held every four years, on the first Tuesday after the first Monday in November. The presidential elections will be on November 3, 2020.

Number of votes per party in each state

Data from the last 10 presidential elections

Before the general election, most presidential candidates go through a series of primaries and party assemblies or caucuses at the state level. Although primaries and caucuses are handled differently, they both pursue the same goal: they allow states to participate in the selection of the main party candidates for the general election. This electoral process began on February 3 with the Iowa caucuses and the last were the Connecticut presidential primaries on August 11.

What are the state primaries and caucuses prior to the presidential elections?

State primary elections are run by state and local governments. The vote is secret. Caucuses are private assemblies held by political parties. They are held at the county or constituency level. In most, participants are divided into groups depending on the candidate they support. The undecided form their own group. Each group gives speeches in support of their candidate and tries to get the rest to join them. In the end, the number of voters in each group determines how many delegates each candidate won. Both primaries and caucuses can be open, closed, or a hybrid of both. In an open primary or caucus, people can vote for a candidate from any political party. In a closed primary or caucus, only voters who chose that party in their registration to vote can participate. Semi-open or semi-closed primaries and caucuses are variations of the two main types.

How are delegates for primaries and caucuses appointed?

In each primary election or caucus a certain number of delegates are at stake. These are people who represent their state at national conventions. The candidate who receives the majority of the party’s delegates wins the nomination. The parties have different numbers of delegates because they use different rules to appoint them. Each party also has uncommitted delegates or superdelegates. (These delegates are not tied to any of the candidates who will participate in the national convention.) At the end of the primary and caucus elections, most political parties hold a national convention. It is there when the winners receive the party’s candidacy. For more information on your state’s presidential caucus or primary election, contact your state election office or political party of choice.

In other elections that take place in the United States, candidates are directly elected by popular vote. However, in the case of the elections for president and vice president, the result does not depend directly on the citizen vote. The winners are determined by the vote of the “electors,” who are part of a process called the Electoral College. Using “electors” as part of the process is established in the Constitution. It was a way of finding a middle ground between a popular citizen vote and a vote in Congress. Who are the electors? Each state has as many electors as there are members in Congress (House of Representatives and Senate). Including the three electors in Washington DC, there are 538 in all. The political parties in each state choose their own list of potential electors.

How does the Electoral College process work?

After you cast your vote for president, your vote goes into a state count. In 48 states and in Washington DC, the winner gets all electoral votes for that state. Maine and Nebraska assign their electors using a proportional system. A candidate needs the vote of at least 270 electors (more than half of the total) to win the presidential election. In most cases, it is possible to project a possible winner on the same night as the November elections, at the end of the count of the popular citizen vote. However, the Electoral College vote, which is the one that officially determines the winner, takes place in mid-December when electors meet in their states. The Constitution does not require electors to follow the popular vote of their state, but it is rare for some to not do so.

Winning the popular vote, but losing the election. It is possible to win the Electoral College vote but lose the popular vote. This has happened in 2016, 2000 and three times in the 19th century. What happens if no candidate wins the majority of the electoral votes? If no candidate receives a majority of the electoral votes, the presidential vote is left to the House of Representatives. Its members choose the winner from among the three main candidates. The Senate chooses the vice president from among the two remaining top candidates. This has only happened once. In 1824, the House of Representatives elected John Quincy Adams as president.

How can the Electoral College be changed?

The Electoral College process is established in the United States Constitution. It would take a constitutional amendment to change it.

State and local elections can occur annually and at any time of the year. Elections are held to choose the state governor, seats in the state legislature, the mayor of a city, judges, local officials, or for other reasons. State or local voting may also be held when it is necessary to decide on electoral initiatives that affect laws, taxes, and the budget of your state, county or town. The electoral initiative, also known as the popular initiative, is a right that allows citizens to make reforms or modify the law and the electoral ballot without involving the local legislature. There are 24 states that have an initiative process.