Arruebarruena goes to the United States 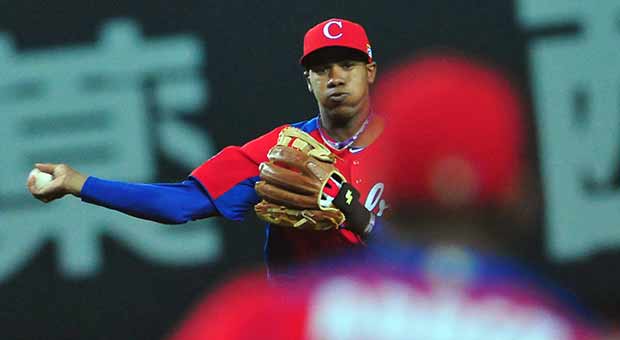 These days, in American baseball people talk about only two things: the imminent start of spring training and the announcement of the retirement of Derek Sanderson Jeter, the star shortstop for the New York Yankees who will hang the gloves after this season.

Especially the latter event has grabbed headlines in major newspapers and television on the planet since for nearly two decades Jeter has earned the honor of being considered the face of baseball, not only in the Big Apple, but in the entire universe of balls and strikes.

To get an idea of the greatness of Jeter it is worth noting that he began his career in the majors in the distant 1996, when he was proclaimed Rookie of the Year and, last but not least, was elected MVP of the World Series crowning his eternal Yankees for first time since 1978.

As expected , the announcement of his retirement after the season to start in a couple of months has caused a huge stir in every corner of the baseball world, shocked by the departure of a man of enormous influence , even outside the diamond .

However, quietly and without much noise it was also known the news of the likely signature of a Cuban shortstop with the Los Angeles Dodgers. Cienfuegos Erisbel Arruebarruena , who so far has set his residence in Haiti , although he did his tryout for Major leagues scouts in the Dominican Republic .

According to Ken Gurnick, MLB, and other sources, “El Grillo ” as he is also known, signed by a figure close to $ 25 million , the contract still subject to rigorous medical examinations , in addition to legal immigration procedures.

The truth is that a few hours have passed since the imminent agreement between the Cuban and the Dodgers was leaked, and now the main specialized websites in the study of prospective players have issued their verdict on Erisbel , with as many elements as we never thought they could regarding him.

For example, Adam Wells, an expert with Bleacher Report, highlights the virtues of defensive Arruebarruena , who impressed him by the power of his arm. For now, he adds, we cannot evaluate his range, but studying of the videos you can conclude that he will not have major setbacks in the majors for displacement, either to the “hole” or the gloved hand.

In the same vein , he highlights his ability to make double plays in accelerating the transfer of the ball from glove to hand , and subsequent precision throwing, sufficient grounds to ensure that he is above the average defensive shortstops in the field , with room for improvement given his age and ease to play baseball, naturally.

Instead, scouts do not hesitate to describe his swing as horrible, with poor use of the lower body and little bat speed; a deficiency that is accentuated by putting all the pressure on arms and hips to drive the ball with prevents any power.

Given these factors, it is assumed that the Dodgers made a thorough job to raise his performance at the plate, considering he is a fibrous player, pure muscle, their main focus should be to correct swing mechanics and concentration at home.

Anyway, Erisbel, adding more pepper to his game (in Cuba he seemed to enter the field reluctantly), to comply with discipline and rigor of the professional baseball can guarantee a spot in the Dodgers, because in modern baseball people highly value his main feature: the defense.

If the agreement goes through, Arruebarruena will join list of foreign players hired by the Dodgers in recent times, amounting to more than 50 as reported by journalist Mark Saxon, and also meet with the Cubans Alexander Guerrero and Yasiel Puig, the latter his Cienfuegos teammate during National Series.

Some experts, hastily perhaps have seen the recruitment of the prospect of 23 years, because he plays in the position of one of the stars of the Dodgers, Hanley Ramirez, one of the idols of “El Grillo”.

However, the Californian team has made a millimeter close, very forward thinking. Its current third baseman Juan Uribe, is 34 and has just signed an agreement for two seasons, during which time they can cover the shortstop with Ramirez, who could move to third base in two campaigns, for his ongoing injury problems and an expected decrease in his ability to move.

This scenario would allow Erisbel to polish his deficiencies in the minors with occasional appearances in the big leagues, enabling his total acclimatization to a high demand baseball, so far from the southern shortstop, who has always given me the impression of looking beyond Cuban borders, aware of his talent and conditions. Now everything is about him.