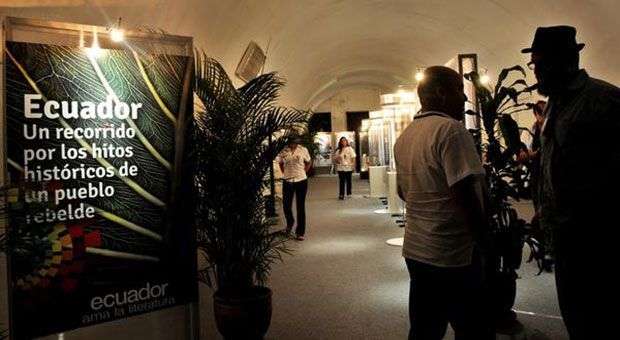 The Fair, considered the most important cultural event held on the island, will gather representatives from 42 countries of Latin America and Europe. This time it proposes an editorial selection of over 2,000 titles with 4 million copies, and will host 153 exhibitors at La Cabaña.

During the opening ceremony, the book “Ecuador: From the banana republic to the non-republic,” by Rafael Correa, president of Ecuador, Country Guest of Honor at this event, was presented.

The president of the Cuban Book Institute (ICL) , Zuleika Romay said at the opening that this edition will allow Cubans to better know the literature, music and the performing and visual arts of the South American country.

The Ecuadorian delegation is headed by Foreign Minister Ricardo Patiño and is made up by personalities from politics, and by 47 writers, intellectuals and artists.

Patiño forwarded President Correa’s apologies for not being able to come to Havana to present his book as he had announced two weeks ago when he participated in the Second Summit of the Community of Latin American and Caribbean States (CELAC).

The Ecuadorian representation is composed of the Minister of Defence, María Fernanda Espinosa, also a poet, who presented in the Fair Cuban her book “Tortured Geographies” and Guillaume Long, minister of Knowledge and Talent.

In the opening ceremony, attended by First Vice President of Cuba, Miguel Diaz-Canel, interpreters of the Ecuadorian folk music as the “Banda Mocha” and singer Carla Canora performed.

The programming of this cultural space also includes photo exhibitions, reading tables, exhibition and sale of handicrafts from various countries, a film series and symposia on Ecuadorian social sciences, exact sciences, sociology and the environment.

As a novelty they will hold a symposium on anthropology and archeology, and meetings with writers, one of librarians and other children’s literature, and will be the place chosen for the delivery of the national awards 2013 in Literature, Social Sciences and Humanities, Editing, Design , Poetry and Essay.

With Information taken from EFE

Arruebarruena goes to the United States