Caribbean Series: Cubans on the opposite side 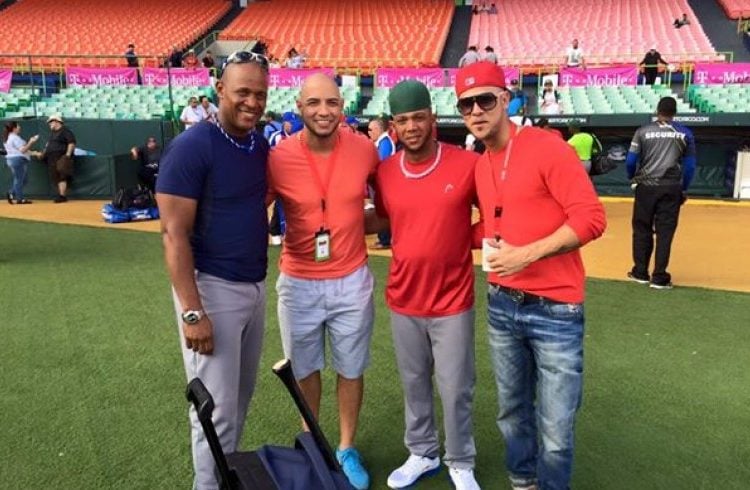 Felix Perez and Hassan Pena with Alexander Malleta and Yadiel Hernández, members of the Vegueros in the Caribbean Series.

After all, Vegueros of Pinar del Río was crowned at the 57th Caribbean Series San Juan, Puerto Rico, where the Cuban team did not show a good face in the qualifying round, but then managed to win the two decisive games in the event.

In addition to the members of Pinar del Rio squad, other Cuban competed in the tournament of the Island of Enchantment. Exactly three Cuban natives jumped on the field of the Hiram Bithorn stadium, though without wearing the four letter jersey.

We are talking about outfielder Felix Perez and pitchers Hassan Pena and Jorge Alberto Martínez, the first two defending the colors of the Caribs of Anzoategui, and the last with the Cangrejeros de Santurce of Puerto Rico, positions they earned with their excellent performance during winter season.

Of these, only Martinez has not crossed directly with Vegueros, as the Puerto Rican manager tasked him to pitch the fourth game and not the third, as many had thought, facing the Cuban batters in the qualifying round.

And the right-hander did not disappoint in his mission with an acceptable job (only one allowed hit in six innings with seven strikeouts) against the Dominican Gigantes del Cibao in the farewell of the Cangrejeros, eliminated in the first hurdle at an event organized with the firm idea of returning to the podium after three decades without tasting the sweetness of victory.

This work, together with four victories he had in the Roberto Clemente League during the regular season, place him in acceptable position ahead of a possible signing with any of the major league franchises, especially now that he does not need legal permission from the government US to establish links with those teams.

“At my age I have to hurry. I had to put numbers here and then think about that. I was focused on this level of baseball, which closely resembles that of Cuba, but with a little more speed on the bases. We must come to pitch aggressively and put my pitching well, “the pitcher from Matanzas told local media, established outside Cuba nearly two years ago.

“In Cuba I did good work in recent seasons, which is what really counts. I think in this sport you are worth more than where you’ve so been done in your career. I was lucky to discuss championships, pitching in major games in Cuba and be the ace of the team. The last game I threw it there in a final series and I did repeat here, ” said the best starter of the Matanzas Crocodiles in the playoff they lost to Villa Clara in 2013.

With more luck in the Caribbean Series sailed Félix Pérez and Hassan Pena, unbeaten in four starts with Anzoategui, but fell in the semifinals precisely against Vegueros de Pinar del Rio.

Both arrived in San Juan after starring in dream campaigns in the Venezuelan circuit, where they won major individual awards in the regular season and decisive round.

The outfielder, a native of Isla de la Juventud, and member of the Cincinnati Reds for the last four years was unstoppable with Leones de Caracas, batting 360 with 80 hits, 16 of them doubles, two triples and nine homers, 38 RBIs and 572 slugging.

Thanks to that performance he was called in as reinforcements by the Caribes de Anzoategui, whom he helped with the domestic title and the MVP of the final series against the Navegantes del Magallanes, driving in nine runs in five games, and exhibit batting average of 368, with two homers.

But beyond his success, Perez is a true Cuban, who has never denied his country, the main reason for his supporting Vegueros in the stands at Hiram Bithorn, except for when he donned the jersey of the Venezuelans against that team.

“Supporting our own, because I’m Cuban. I’m not popular but I take them in my heart, let´s go Cuba, come on boys, do not give in. Come on, you can, anyone who likes baseball, there are his struggling country. I love you, Felix Perez catching sun, but supporting you “he wrote on his Facebook profile. He has played professional baseball for several years already.

Before arriving in San Juan, the southpaw had commented on a possible confrontation with his countrymen: “It will be a very nice experience, is something great is going to happen when we play against Cuba”.

And the truth is that in Puerto Rico the desired meeting was fulfilled: “More than a pleasure, it was a great pride to play, share, laugh and talk with my Cuban brothers. Thank God I could do it, my respect for them and my heartfelt congratulations, indeed, win or lose, they are already champions they need only trying. I’m Cuban and grateful to God for that, I just want you to know that I tried to do everything I could to that these days were fine. Thanks for everything and this day are you together with the Lord helping, to search for that victory. Come on, go Cuba you can “, published on social networks.

On his person, the Cuban closer Hector Mendoza, of brilliant performance in his first outing in San Juan against the Cangrejeros de Santurce, said exclusively to OnCuba he knew Perez just for reference, but had never spoken to him in person.

“We first saw each other here in Puerto Rico. He came to the stadium to see a game of us and we also face the team he plays. Then we shared together, it’s been a pleasure, because he is a very cool and very humble fabulous person, though sometimes people do not value it as well. He has grown a lot as a player, his playing level is rather high, has arm strength, strength and speed at bat, “said Mendoza, who was also born in the Isle of Youth.
The closer, with experience in the minor leagues in Japan, also said he shared with Hassan Pena, also closer with much more experience; opportunity to exchange took over the relief pitching.
Undoubtedly, Pena is a good source of learning for Mendoza, for this season shined with the Navegantes del Magallanes, by saving 19 games in 20 chances, valid for being selected as the Best Closer of the Year.

Pena has become a great reliever and is in love with the role. “I love it. My first season as closer was in 2011 and since then I’ve focused on the job. The responsibility of saving is great and I enjoy the most, “said the right-hander to the Venezuelan press.

“My goal is to transfer my good performance of Venezuela to the United States. I missed consistency; I worked hard in attacking hitters, opening with strikes. That I failed in the minor leagues, “said the pitcher, who hopefully will achieve the dream of the majors.

Inside the skin: “My country is a culture to which I belong in fullness”