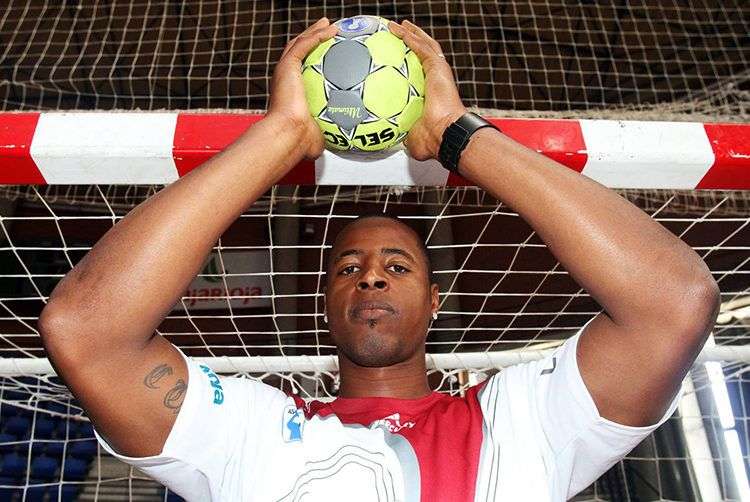 If in Cuba you ask hundreds of thousands of sports fans: Who is Rafael da Costa Capote? The response of the vast majority will be: Who is that?

Rafael is none other than one Cuban that, as many others, walk through the world. But one of the most successful. Nationalized Qatari last year, Capote was the leader of the selection of that country in the recently held Handball World Championship where they achieved a historic subtitle.

The Qataris, as hosts, welcomed as their own several foreign players during 2014, of which 11 from eight nations, joined the handball team. But among them the Cuban shone, fifth best scorer in the tournament.

With six goals in the final, and suffering from an injury from the semifinal match against Poland, Rafael was one of the foundation stones to face France, although the power of the Europeans was greater. Despite stealing headlines from various media, few know that this Cuban, one of our lost jewels, in Qatar is kind of a prince.

That the numbers show, this time they are not so cold. Rafael Capote, as he is known in the sports world, is the best paid handball player in the world at this time. The emirate paid 40,000 Euros for his nationalization and since then he keeps a salary of 13,000, with his foray into the local league. Moreover, for every victory in the world championship the hosts paid him 90,000 Euros, plus some hidden bonuses.

Perhaps the Qataris will pay his weight in gold, but what is clear is that they have used the qualities of an athlete trained in Cuba, and as many have emigrated, demonstrate how much potential in Cuban handball have gone to waste.

In the specific case of Rafael, since he left the Cuban delegation at the Pan American Games in Rio de Janeiro 2007, his career in European competitions has been superb. He began his professional work in the Pallamano Conversano, where he earned a Coppa Italia and Handball Trophy in 2009.

He immediately joined the BM Ciudad Encantada, in the Asobal League, in Spain, the strongest in the world. In 2011 he changed his shirt for Naturhouse La Rioja. In both teams he showed excellent scoring records and consolidated as one of the world’s most effective left laterals.

Capote closed at the end of 2013 his move to El Jaish SC, Qatar, the first step toward nationalization. At national team this giant, 27, adds the Asian Championship title last year and silver in the world just ended, when he was voted best left back.

This is a summary of the pilgrimage of Rafael da Costa Capote. But he is not the only distant from their homeland. Also nationalized by Qatar there is another excellent player, Jorge Paván, who didn’t make the team at the end.

To that list we have to add Alfredo Bravo, Daymaro Amador, Alexis Hernandez and Frankis Carol, who compete in Portuguese clubs. In Spain we find Guillermo Corzo Gómez and veteran goalkeeper Rey Gutierrez who arrived this season to the Atletico Valladolid.

Meanwhile Michael Bravet and Carlos Mirabal play in Brazil but have nationality of the Dominican Republic. In the South American giant also plays Zuleiky Gómez, while in Italy Arasay Durán is applauded. These two girls are among the best Cuban players of the 21 century.

But they decided to leave our country and make a living away from home, before approving the law allowing contracting out. Due to the slowness of the process of opening, two national teams in the male sector left the team in Central Veracruz in 2014 and soon Maricet Fernández arrived in Spain. A few weeks ago Maricet managed to get in the main Spanish league, even though days after that the option was frustrated by problems of contract.

Those are some of the Cuban handball, active, writing their stories in different geographies. Without intending it, they demonstrate the strength of the sport in our country despite not having a strong competitive schedule and their international games being scarce.

The last words were full of optimism, because as this reporter knows, the National Handball Commission is negotiating some contracts right now. Hopefully news comes soon.