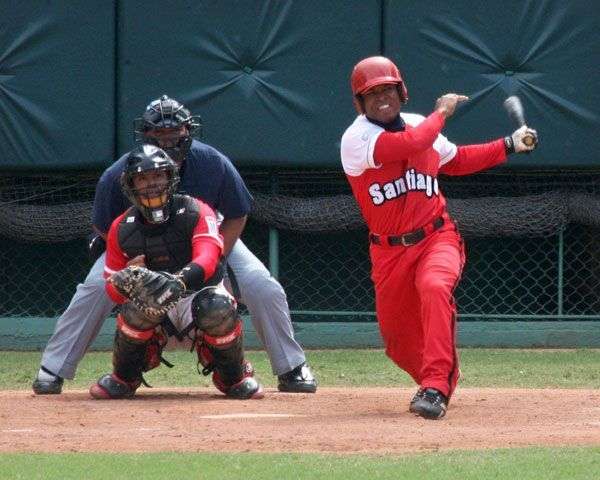 The National Baseball Series has a very questionable quality. One of the fundamental causes beyond the exodus of players is the large number of teams making the tournament structure. Each province is represented in the Cuban baseball national tournament. The transfer of players from one province to another is one of the current phenomena of the greatest sporting event in the country.

The province gives more players is Havana because the abolition of Metropolitanos it has only one team for more than two million inhabitants. It is acceptable that men like Víctor Muñoz, Jorge Luis Barcelán, Yoel Mestre, Yanier Herrera, Rigoberto Gómez and Maikel Hidalgo develop their skills with other provinces.

The capital can even afford to “export” good prospect short-stops as Yamil Rivalta, now playing with Villa Clara and Jorge Alomá, who does it with Sancti Spiritus.

However, Industriales doesn’t escape the flashy ‘signings’. After the immense saga referred to the Gourriel brothers now they painted blue two pitchers who were reinforcements in the last series: Cienfuegos Noelvis Entenza and Alexander Rodriguez, from Baracoa. Not to mention Irandy Castro and Michel Martinez Pozo from Pinar del Rio, with several series among the disciples of Lázaro Vargas.

You can find a provincial team with athletes from six or seven territories. The most famous case is that of Matanzas. Even some fans jokingly call it the “Real Matanzas’ alluding to the football club from the Spanish capital. Although Victor Mesa for his eccentric talent is closer to Portuguese coach Jose Mourinho than to Florentino Perez. The only difference is that The Special One wins, and VM32 still owes us a great title.

Victor Mesa has on his roster men from Pinar del Río, La Habana, Artemisa, Sancti Spiritus, Villa Clara, Camagüey and Guantánamo. And he was about to get for his cause Danny Betancourt and Yaumier Sánchez but political authorities from Santiago de Cuba took action on the matter. For this season he included in the list three pitchers from other provinces.

Artemisa´s Jonder Martinez changed shirts, and now is one of the best starters in Matanzas. He rescued the Santi Spiritus lefty Ramon Liquor with experience in eleven national series, and more than fifty victories. Camagüey reliever Alexis Mulato also came to Matanzas. To round everything up he brought Rogelio Garcia as pitching coach. Almost nothing.

Since the signing of Guantanamo shortstop Dainer Moreira two seasons ago against the authorities of the province, the transfer of athletes is another feature that put in suspense the credibility of Cuban baseball. And what happened to the vaunted representativeness defended by those who want so many teams competing?

So common is this phenomenon that a pitcher can have four national series with four different teams like havana´s Héctor Galindo who now wears the jersey of Isla de la Juventud. He played previously in the ranks of Metropolitanos, Industriales and Mayabeque. The record of playing in six different teams in Cuban tournaments that boast Villa Clara Luis Armenteros Vizcaíno and Jose Pérez hangs in the balance.

An unusual case is that of Villa Clara Mauricio Hernandez who is in its second series, and has never played for his province. He debuted with the Isla de la Juventud, and now plays for Cienfuegos.

There are other cases like Matanzas Jefferson Delgado debuting with the next province, come home, and then return to the team that gave them their first opportunity. Another Villa Clara, left-hander Elvis Camejo pitched five seasons in Matanzas, and debuted in this series with his province of origin.

In the east of the country is less common the change of coats although there are examples like the Camagüey pitcher Rodolfo Sorís and Granma Luis Manuel Castro y Yuniel García now playing in Holguín, and Pedro Agüero who left Santiago and ended up in Guantánamo.

Coaches also move. To Rogelio García we have to add Esteban Lombillo as director of Camagüey, and Ciego de Avila Manuel Alvarez, is now pitching coach of the same team or Villa Clara Ronni Aguiar and Michel Pérez Bello in Ciego de Avila. it takes all sorts to make a world.

At this rate the most powerful provinces in economic matters will have greater opportunities to round out their selections. Cuban baseball players are like the future of baseball in Cuba. They move aimlessly.

“Cinema is for having fun or living from it, not to suffer”

Keep on reading: On the left (II)

In Cuba for the first time Up with People multicultural project