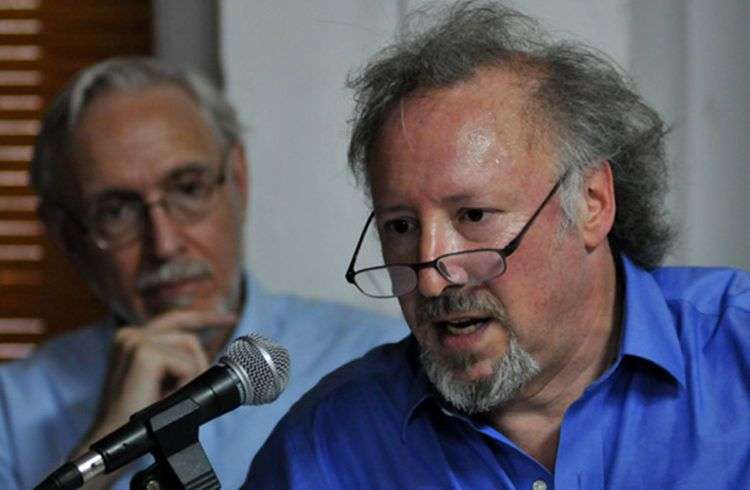 The diplomatic ties between Cuba and United States ceased in 1961. Since then there is a secret bridge between Havana and Washington, a path that seeks to reconcile the seemingly irreconcilable. That is the topic of ¨Back Channel to Cuba, The Hidden History of Negotiations between Washington and Havana, ¨by Willliam LeoGrande and Peter Kornbluh; and ¨De la confrontación a los intentos de “normalización”. La política de los Estados Unidos hacia Cuba¨ (From the confrontation to the attempts of “normalization”. The policy of the United States towards Cuba), by Elier Ramirez and Esteban Morales. These are two books on the same story, told by the people from here and there.

“For me it’s a historic day, because we have been working for almost 20 years in researching, writing, finding documents … and the idea was always to come to Cuba to compare our story with yours,” Kornbluh said during the presentation yesterday, at Villena Hall in the National Association of Cuban Writers and Artists (UNEAC by its Spanish acronym).

“This was our mission -he added,- to tell the civil dialogue, secret talks, negotiations between governments, and learn the lessons of this story to change the narrative in the United States, for the current president to use his last two years in changing policy towards Cuba. ”

One of the first surprises found by the American scholars was that every president of his country, since Eisenhower, have had some approach in order to establish conversations with the island, in an openly or veiled way.

According to Kornbluh, everything began to materialize during the administration of John F. Kennedy, when the premier used intermediaries, James Donovan initially, to negotiate the release of the Bay of Pigs prisoners. On the eve of the assassination in Dallas, an emissary from JFK, John Daniel, was on the island to talk to Fidel Castro; as well as the journalist Lisa Howard, active figure in bilateral communications.

Memos and other declassified documents indicate that the Cuban government also had an initiative, a gesture, with almost all American presidents, in pursuit of trying to improve relations. Personalities such as Gabriel García Márquez and J Paul Austin, executive of Coca-Cola, became “ambassadors” in this long process.

Passing through the presidential cycles of Johnson, Nixon, Carter, and Reagan… Back Channel to Cuba reaches the present. “We are in a time where this might finally be a possibility, and the hope is that this story to serve to advance in normal relations,” Kornbluh noted.

According LeoGrande, over the years, “one of the lessons we learn is that the right time is very important. These are times in which the two presidents have recognized that current relations are not good for any of the two nations, they have both stated it; and now in April they will have the opportunity to talk, during the Summit of the Americas in Panama. ”

For Elier Ramirez, the simultaneous presentation of the volumes speaks a lot about the close links reached by the academic and cultural exchange between Cubans and Americans, and what might be in the future if there are no current regulations.

From the confrontation to the attempts of “normalization” was published in 2011, also by Ciencias Sociales Publishing House, and now has grown considerably from the access to national documents, examination of numerous sources of recently declassified American files and the implementation of new and more extensive interviews with historical actors in both countries, such as Robert Pastor.

James Carter’s administration was the one that could go further when moving towards a normalization of relationships, thus it occupies more pages. “What happened in those years in terms of conversations and gestures from both sides, we think that is unsurpassed to this day. Obama’s administration, even with a more favorable context, has lagged far behind when compared to what Carter did at the time, “Ramirez stated.

“If Obama wants to make substantial changes in his policy towards Cuba, now he has the advantages that no president has had, Esteban Morales added. So many internal and external signals had ever been accumulated. The latter have been given by the recent editorial in the New York Times. ”

In line with LeoGrande and Kornbluh´s criteria, Ramirez stressed that this research “is not only to contribute to historical science, but that this contribution can also have a transformative impact on our contemporary, can lead us to at least one more civilized relationship. Progressing in all areas where there may be a common interest, truly national, is the best way to break the inertia of disagreement. “

Keep on reading: On the left (II)