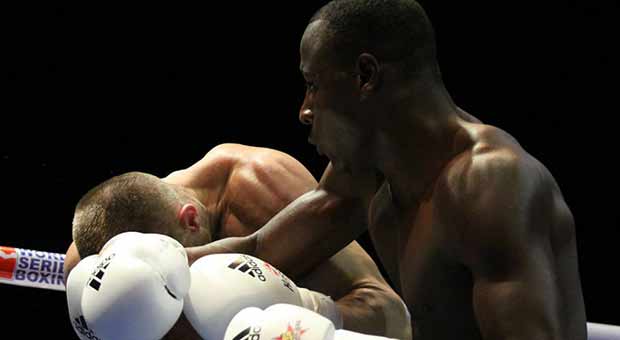 The five boxers who came out the ring of Ciudad Deportiva on Friday won their respective fights, as part of the IV World Series organized by AIBA. The quintet of fighters presented by the Polish Hussars franchise barely offered resistance to the obvious superiority of Cuban Domadores . This result confirmed the Cuban team in the first place in Group B , now with 21 points and balance of 31 wins with just 4 losses.

In the first fight Yosbany Veitía (49kg ) won with ease over Sebastian Jagodzinski . Veitia boxed all the time from the outside with repeated entries and exits. He combined exquisitely , sometimes accelerated the pace and the rest of the time he let the clock tick. The decision of the judges was an unanimously 3-0 ( 50-42 , 50-44 , 50-44 ) . This was the fourth consecutive success of Veitia, who was consolidated at the top of the ranking of the division in the WSB.

Then Marcos Forestal (56kg) defeated Sylwester Koslowsky . The verdict was 3-0 (50-45, 50-45, and 50-44). The Polish placed his right at times on Forestal’s face, but always attacking disorderly and tawdry. Beyond those few punches that he received, the Cuban knew settled the match without much difficulty and that meant his second win of the tournament, both as a substitute for Robeisy Ramirez who was again suspended for repeated absences to practice.

The fights of Yasnier Toledo (64kg) and Ramón Luis (75kg ) were the classic walk over the ring. Their victims last night were Damian Kiwior and Piotr Grendke respectively. The hooks and straight by Toledo were a constant whip to his rival, who received penalities a couple of times for ducking illegally. The vote on the cards was 3-0 (50-43, 50-42, 50-42 ) . While Luis gave a lecture: he made barely broke a sweat, his jab had an enviable efficiency during the final assault and the applause of the spectators was won by repeated movements of torso to dodge punches thrown by the European. The verdict was 3-0 with identical 50-45.

The scene was then ready for that in the 91 kg division fight Guantanamo Erislandy Savon made the night perfect for the Domadores. He only needed a minute and a half to put Lukasz Zygmunt out of action. The KO was not due to a clean, hard punch, but a right “slap “that made a dent in the back of the head of Zygmunt . The Polish kneeled on the ring and seemed very happy with the decision of the referee to end right there actions.

The five victories achieved by the Cuban squad yesterday completed the sweep (10-0) against the Polish team. The next duel for the Domadores is agreed on February8, when they will visit Russia.

Pietro Resta: an Italian footballer who plays in Havana