Eileen Sosin Martínez
in Technologies of Communication and Media
0 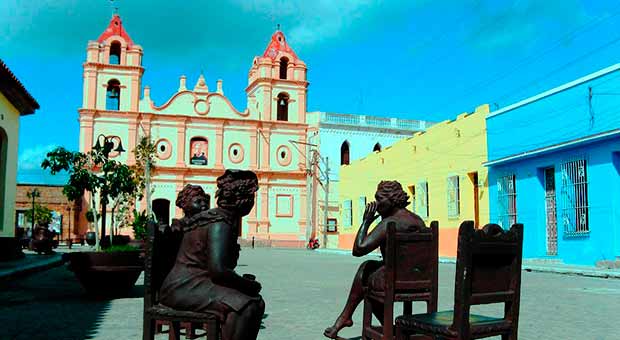 The natives are reputed to be very educated and cultured. They call it “The Camagüey” the city of Avellaneda and Nicolás Guillén, Ignacio Agramonte and Fidelio Ponce de León. Its founding charter disappeared forever in a fire or looting, but every February 2 they celebrated the birth in 1514 of the former village of Santa María del Puerto del Príncipe.

The great event awakens desires for beauty and improvement everywhere. One of the leading projects is the Paseo de los Cines (Movie Theaters Promenade) , where El Encanto and Casablanca will reopen, which at a time werethe highest grossing theaters in the country, after Yara and Payret, architect Yosmel Diaz says.

They also restored the video room Nuevo Mundo, first founded in Cuba that will host the “Tomás Gutiérrez Alea” Thought Chair. Nearby there is a bar which recreates the atmosphere of the “Ritz”, named after the famous movie by Michael Curtiz. The Fotograma cultural center will be dedicated to the music in the film, while the sidewalks outside simulate a tape of 35 mm, and several billboards are reminiscent of cinema personalities.

Part of the Camagüey historical area, the largest in the island, with 300 hectares, was declared a UNESCO Cultural Heritage Site in 2008. José Rodríguez Barrera, director of the Office of the City Historian explains that to deserve this condition they must demonstrate exceptional values , without equal in the world. Among the arguments of the villa include an urban area as a cobweb, with crooked streets where the visitor easily loses his way , as well as a vast repertoire that combines various architectural styles and periods .
That title becomes a boost for the repair work carried out some years ago, for this 500th anniversary. So it is already a fact the underground networks in several areas, and the gradual elimination of the so-called incompatible uses , for example, administrative offices occupying local heritage buildings .

They also restore the entrances to the villa, the Casino Campestre , parks and services. Dining novelties come with the Casa del Chocolate, and a locomotive with a passenger car converted into a café.

It is not simply that “The city of tinajones” is painted, the historian said, but much further: remove architectural barriers, improve the technical condition of the real estate and quality of life of people. “When the morphology of a place changes for good people’s behavior also changes.”

Meanwhile, they reopened to the public the “Ignacio Agramonte” provincial museum while at the Teatro Avellaneda civil works were completed. Regarding the Camagüey poet, known as the “Tula”, on March 21, in her bicentennial, her statue will be built as a tribute by sculptor Sergio Roque.

In academic matters, they had the VI Provincial Congress of History, and these days takes place the VIII Symposium Challenge and Management in the Management of heritage cities, underway in the brand new Santa Cecilia Convention Center.

The trade fair of the territory, ExpoCam 2014, gathered about 50 Cuban companies and three foreign branches. Other issues of strong economic interest lie in the construction of a factory for milk powder, and actions to promote the city as a tourist destination. “For the purposes of cultural tourism is a very important wealth to exploit,” Rodríguez Barreras says.

The festivities include severe days of activities during Culture Week, until February 7 . A large provincial choir concert, the Symphony, student art schools, and other groups that perform twenty songs dedicated to the city, national and foreign composers are expected.

They say that whoever drinks water from tinajón (big clay water recipient, typical of this area) always returns to Camaguey. On February 2 is also the day of the Candelaria Virgin, worshiped by sailors. Maybe that’s why the pirates returned to Puerto Principe. Henry Morgan, the Englishman, French Grammont were seduced perhaps, fatally in love.

Thea Hjelmeland: Without music my soul would be poor