Pietro Resta: an Italian footballer who plays in Havana 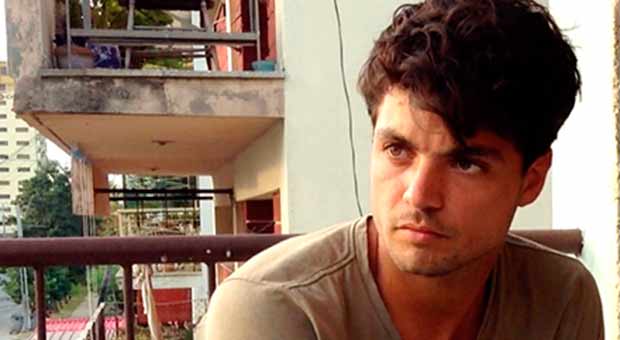 Just two months ago Pietro Resta, a young Italian, 21, came to Cuba. Today, with the skin so dark due to the Caribbean hard sun, he is playing as left back in Havana team that participates on the 99th edition of Cuban National Soccer League.

He debuted in the Cuban classics on January 25, against Ciego de Avila, and although he was a little tired in the second half, Pietro left the field with a smile. In the stands of Havana´s Pedro Marrero stadium his “Cuban family” was waiting for him and among them the most proud of his fans, his father.

It is not a novelty that European players to be involved in these contests. Pietro Resta joins the long list of players from that continent who during the 30s and 40s of last century plagued the Cuban tournament playing for Spanish root clubs based in Havana . After 1959, and mainly in the last decade, some foreign students have also participated in the competition.

Sat on the balcony of the family flat in Miramar, we had the opportunity to talk to this young man, who claims to have found in Cuba an unparalleled joy on the field.

Pietro has played soccer all his life. At just 17 he was already a professional in the sport. “I played for Fiorentina when I was 14 and up to 17, then I joined Siena with the first team in Serie A, but there I was just training, I never got to play in the first division.”

By then some bet on a career within soccer fields for him, but in November 2009 he had a car accident that left him out of the ground for almost three years, Angelo, his father, says. “It was needed to go under surgery four times, the second one was here in Cuba, and luckily the recovery has been very good.”

The three-year absence took him out of the competitive system, postponing his dream to be part of Italy’s top soccer level. However, his life took other course.

Angelo, who is in love with this island since the first day he came back in 1996, has always had a dream : “having my two children with me in Cuba.” Soccer was the perfect excuse then, a passion that reunites them again, now in this part of the world.

Pietro, meanwhile, says that several things have amazed him of soccer played in Cuba, especially “the atmosphere of joy, the happiness of the players for the preparation and when playing. Here a match is a great party, not like in Italy where it is like a war. It’s totally different. “

“Very good! Because soccer is lived as a game, with great joy . “

He also recognizes that he was surprised about the rigorous work made by the players and the coaching staff. “Soccer played in Cuba seems very good to me. Although it is different from that practiced in Italy, it is very technical and we have an excellent coach who is always attentive to the way the team played . I’m very happy; I did not know that Cubans pay serious attention to this sport. “

– What has been the most difficult thing in your startup?

“I’m still getting used to the heat and sun, because the change is tough. The first two weeks were very difficult for me for that reason, and also because of the field. I think we could play better in a ground with more conditions. Although the grass is a constraint, if the team is strong then wins, and grass quality is just an excuse.

¨Besides, I don’t think the heat to be a major problem for me, I’m training for that and I hope to play as the rest of my teammates soon. The competition has just begun but we have a squad able to win the tournament and that’s what we all want. ¨

Since joining training on January 2nd Pietro showed the quality that has led him to integrate the Havana’s team as regular player in the lineup of Coach Dariem Diaz. “It’s a big challenge, because I must prove deserving the position among many talented guys,” he explains.

Inserting into an unfamiliar environment is always a challenge, but that seems not to worry to this young player. On the welcome given by his new teammates he claims feeling comfortable, “I am very happy with them, they are very friendly and witty. I still do not understand everything they say, but eventually I hope to understand it. “

– Was there any impediment on the part of the event organizers for you to play the National Championship?

“No, on the contrary, everything was normal. I play with my passport as identification and have had no problems with that. “

– What will you do when the Championship to finish?

“I do not know. For now I’m just worried about playing and winning the competition. Then I guess I’ll go back to Italy to be with my family and friends. Here I feel well and I could return next year maybe, or I could go to play in another country. I do not know yet. “

– So you do not discard the idea of ​​returning to play in Europe?

“I’m Italian; my dream is to play in Serie A, although it is already very difficult. But for now I just want to play and have fun . I am also learning Spanish and I’m study every day, that’s important to me. “

According to the specifications of the National Soccer Commission, all players who actively participate in National Championship are eligible to join the Cuban national team in international events. Pietro’s position today as regular player of Havana squad puts him within that group.

When insinuating that possibility, he smiles and tries to contain his excitement, calmly choosing each of his words. “That’s another of my dreams, playing with the Cuban team . But I would have to prove on the field that I can be an important player for the team, and it would be an honor to play for this country that has an incredible history. “

It is not just about sport. Pietro, like his father, has found reasons to love this country that go beyond soccer. “The weather, the beach, which is not near my home in Florence there in Italy, but the best is that people are very nice and cheerful,” the young player noted.

The way for this guy has just begun, but the fact is that Cuban fields will see him until May 31, last date of the competition. Meanwhile, Pietro Resta, left back of Havana team, will write his own story in Cuban soccer, joining the legion of players who have left their mark on this earth.