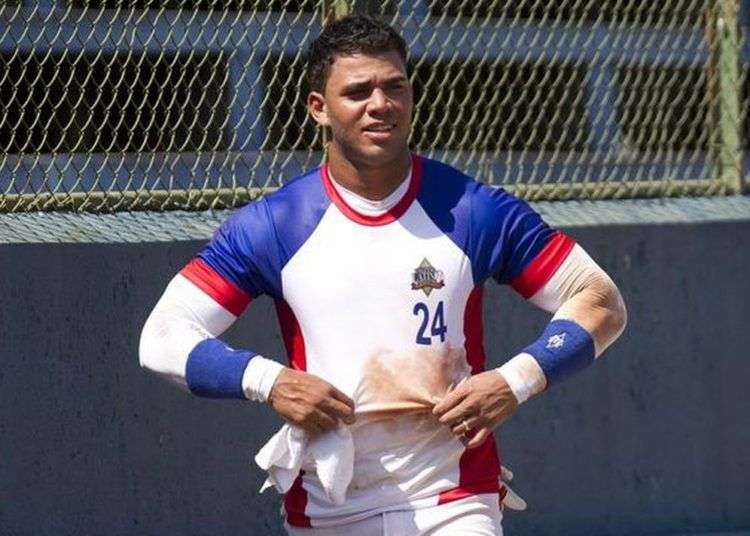 Neither Yankees or Dodgers. The Cuban prospect of 19 years Yoan Manuel Moncada will land on the Red Sox, after reaching an agreement with the franchise in New England for a figure close to $ 31.5 million, although on Monday night the franchise had not confirmed the “bomb”.

Yes, because the arrival of talented player from Cienfuegos to the Red Sox has sparked uproar in the major leagues (MLB), who lives these days the start of spring training in Florida and Arizona. The news reverberated particularly in New York, by the considerable setback for the Yankees representing the loss of a young star, intended to breathe life into a nearly deserted farm system.

The mythical Bronx Bombers, top winners in American professional baseball, was in several private sessions with the switch-hitting infielder, but eventually Moncada decided to go to Boston, where will have the company of fellow Rusney Castillo and also a remarkable Latina colony, led by David Ortiz, Pablo Sandoval and Hanley Ramirez.

To a lesser extent, the Dodgers also felt the decision, although they still have under their power a star prospect as Corey Seager.

However, after extensive studies on the Cuban by Mike Brito, one of his most famous scouts, noted for discovering the phenomenon Fernando Valenzuela in the 80s, it was expected a greater effort of the team where Yasiel Puig, from the same Cuban province, plays.

“He’s a very good player, playing second base, but can also play in the third and around the infield. He has very good shape, runs bases well, is a good prospect, “explained Brito on Moncada, which was also seen close by Andrew Friedman, president of operations for the Dodgers, and Don Mattingly, manager of the California team who ultimately did not step forward to take the Cuban.

The potential impact of Moncada in the Red Sox is still an enigma, but is expected to spend time in the minors to polish his tools and get some playing time after being away for over a year of competences .

In addition, management of Boston will handle carefully and unhurried Moncada progression, considering its infield is covered in each position for the coming years, with the star Dustin Pedroia and Sandoval on second and third base, respectively, and the talented Xander Bogaerts at shortstop, plus Mike Napoli at first base.

We speak of solid players, offering security to mentor John Farrell, but Yoan Manuel may debut in the majors again if injuries hit Napoli or Pedroia, or if Bogaerts does not resume his premium performance in his rookie season completely lost in his second season.

However, we assume that Moncada will take a considerable time in the minors, a time he must take to gain experience, especially in the recognition of breaking pitches that are not so frequent and sometimes unknown in Cuba, as well as his batting from the right, notably less good than from the left.
The legal framework
After leaving Cuba legally 14 months ago and settling in Guatemala, Yoan Manuel Moncada was declared a free agent by MLB since November 15, 2014, although at that time he could not sign any contract, having no authorization from the Office of Control Foreign Assets (OFAC) to undertake such an operation.

Months passed, and still in February OFAC had not unlocked the Cienfuegos player, but at that time Major League issued a statement where they made it clear that as the Cubans do not need permission, and instead only have to file an affidavit as the last step before negotiating contracts with teams in the majors.

Then doors were open to Moncada and all Cubans who were waiting for permission, with the particularity that he was categorized as an amateur free agent rather than professional, he is younger than 23 years and didn’t play five seasons in the Cuban circuit.

Under these terms, set in the current labor agreement between MLB and the Players Association, any team to sign Moncada had to do with the money in their budget for firms of international free agents in the period established (July 2, 2014 to June 15, 2015), and in case of exceeding the amount of money allocated they would have to pay a penalty of 100 percent of the contract.

That is, the Red Sox have paid $ 31.5 million for Moncada, but will have to pay the same amount as penalty-a total of close to 63 million- plus, it cannot sign free agents over the next two years in excess of the $ 300,000 amount.

Anyway, since this is history. Moncada now has the opportunity to start from scratch with the Red Sox, squad has openly committed to developing their talents and prepare it as one of the representative faces of the franchise in the next decade, another sign of confidence in the Cuban players after multi-million dollar contract (72.5) agreed with the outfielder Rusney Castillo.

Five tools and no end in sight

The first time I saw Moncada on a baseball field was in Sancti Spiritus, in the All-Star Game in the 52 National Series. On that occasion he won the race to first base and around the diamond, inescapable sign of his tremendous speed, but also impressed by physique similar to a slugger.

With time and differentiated training in Guatemala and the United States, Moncada should be more tanned, and the truth is not diminished in his baseball ability, as in all private sessions left clues of power, contact, good movement, soft hands, arm strength and speed mentioned in base.

The criteria are so positive that Ben Badler, writer of Baseball America, said Moncada has sufficient credentials to be selected as first in the 2015 draft if elegible.

“It is a runner with brute force, above average, batting with power from both sides of the plate and has the tools and skills needed to impact infield, perhaps at shortstop,” admitted in October Kiley McDaniel, one of the leading chroniclers of the prestigious site FanGraphs.

“Moncada is the kind of fast twitch, with great speed in the swing, and his history of playing well in big tournaments and Cuban professional league is excellent considering his age,” said the specialist.

His explosiveness and versatility have earned all these accolades, but there is a unanimous view that it is not a finished product, and there have also been doubts about his ability as a defender as a shortstop and right-handed hitter.

According to several scouts, his feet movements are not characteristic of a shortstop, and neither has shown a fluid performance in the position, although his arm and displacement he can take the place eventually.

However, if he is asked for his preferred location, he chooses the second base, where more time has been in the field, but Boston at the end will define what to do according to its needs and projection of Moncada.

Regarding the batting, “he will have to learn to hit the breaking balls, learn to select the strike zone and how to deal with constant speed in a long season, with longer paths than those of Cuba,” said an international scout Jerry Crasnick, ESPN analyst.

Precisely because of these fissures, some experts favor his stay in the minors for a couple of years, climbing from Class-A High to Double A, with incursions in the majors for his response on the big stage, albeit with a word that reign in the picture: patience on his part as the Red Sox.

Howsoever, Moncada has star quality, projections so say, and so far has taken the first step, establishing formal links with one of the most prestigious and powerful franchises in the United States, where he ahs to show not only his athletic ability in the diamond, but also that dose sensitivity and maturity that has captivated many.

“I cannot imagine any scout saying that Yoan is arrogant in any aspect of his life. He is the nicest 19, more mature and down on earth I’ve ever seen years, “said David Hastings, one of the representatives of Moncada.

Cuba and the OAS

Cuba: the two prices in one country