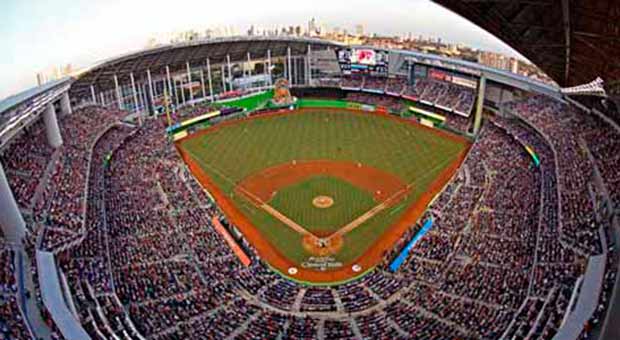 Almost about to hear the long-for cry of Play Ball that starts a new major league season, a small group of Cubans are rubbing their hands , inhaling deeply , lowering their in front of their lockers and certainly dedicating a prayer to the ” Blessed ” for Him to help them debut with their right foot in the best baseball in the world.

What a mission for this quintet of youngster, but not impossible! If anything they showed in the National Series of Cuba – discounting Nieto- is that they boast quality to shine at the highest level. Strength, speed, intelligence and know-how are qualities acquired south of the Straits of Florida side, that now, a few miles above, in Spring Training; they should refine and enhance other skills.

The first is to adapt – if they have not achieved it- in the psychological aspect. They will face a new culture, new language, “strange” foods, and the same players who speak English, Japanese, Korean, Portuguese or Dutch. Anyway … all new, even to the magnificence of the clubhouse they will collide into their mind during the month of April. At least “Pito” Abreu was amazed with the U.S. Cellular Field, the stadium where his team Chicago White Sox plays home club.

Already in the field, the paraphernalia and consumer society to which they are exposed to daily will stay in the background. Then the time will have come for them to show what their lineage is. The hardest part is predicting that the five will amaze all and become stars overnight.

I hope so, but it should not be. Like everything in life, but there are drawbacks and there isn’t any, we humans create them. Nieto, Guerrero and Arruebarruena already have their first negative reports.

Nieto is at a disadvantage with the other four since he doesn’t have a multimillion dollar contract on his back.

The real shadows that haunt the catcher Adrian Nieto are his poor defense and average offensive. However, the good news is that he only has an opponent to dispute with the catcher position in the White Sox in Chicago. But that does not mean they are going to give him the position easily. Who does not bat, has guaranteed a return to the minor leagues and another member of the organization fills the spot.

In spring training his offense has looked pretty good, showing more power from the left side (he is ambidextrous). However, he should work on defense, especially in blocking pitches against the ground. If he doesn’t make it, they will send him to the minors so his development will continue and he will wait for a new opportunity.

It is said that Alexander Guerrero needs long time in Triple -A category to refine his skills at second base, because in Cuba with Las Tunas he did not play the position. Besides, he was not sure at the defense, in the shortstop, or the outfield.
Another thorn in the side is the lack of pace by not playing for over a year. And if we add that he must adapt to an unfamiliar position, an internship is warranted for 12 months in the minors. No problems at bat, the Los Angeles Dodgers scouts saw in him a player ready to hit 20 homers per season. This earned him to sign for 4 years and $ 28 million with the Californian team.

But the question is: will playing second base affect Guerrero’s batting?

One which arrived last and was added to the same team of Guerrero is Erisbel Arruebarruena. He is an awesome shortstop who can catch anything that goes his way. This young man is a star with the glove. However, he raises questions by his weak and low power hitting, a situation that many wonder if it was wise to give a check for 25 million to a man who should not hit even 10 homers.

Beyond the dim offensive of the Cienfuegos player, his batting should be solved with a suitable plan of swing repetitions. So it will not be wrong to send him to the minors earlier this season to get used to a portion of the pitching he will see in the majors. But it must be for a short time, as the show that Erisbel will be will make fans delirious at Dodger Stadium, as Yasiel Puig did in 2013.

If someone from this small group is to walk the razor’s edge more carefully, that responsibility lies with the pitcher Miguel Alfredo González . The skillful Artemisa hurler took longer than due to sign with a major leaguer team. Twist of fate, the wait was worth since he signed for 12 million for three seasons with the Philadelphia Phillips at the end of 2013.

Now, facing several of the most feared hitters in the MLB in his East Division in the National League seems not an easy task. Few Cubans pitcher so far managed to take control of XXI century prestige from the mound. Besting players who seem demigods bat in hand is the focus of Miguel Alfredo. It would be a mistake not to look, at least for now, to the game as out by out, man by man.

The first is to get to know opponents. Then, with the experience he earns he may choose what to pitch against a particular player and how to dose himself to walk seven innings. If Phillips made the bet is because they saw the ideal conditions in Miguel Alfredo Gonzalez to be the new image of a pitching staff that has no more than four quality pitchers.

The latest in the list is “Pito” Abreu. There is not much left to say of this “giant” except that has quietly hit in spring practice. His defense looks good and he is sure to open the opening day as third or fourth in the lineup , as decided by the manager.

He will easily hit close to 300, and his ability to hit balls beyond the fences has caused several “experts” compare it with the star Miguel Cabrera. Big words! Only the field will approve so great analogy.

This small group of new Cubans feeds the MLB of a talent that should explode in 2014 , despite some questions that come natural when new players enter the game.

We just have to wait and let Abreu, Arruebarruena , Guerrero, Miguel Alfredo and Nieto to write their own history. Let’s accompany them as we can and fingers crossed for their dreams to reach the top of the baseball Olympus.