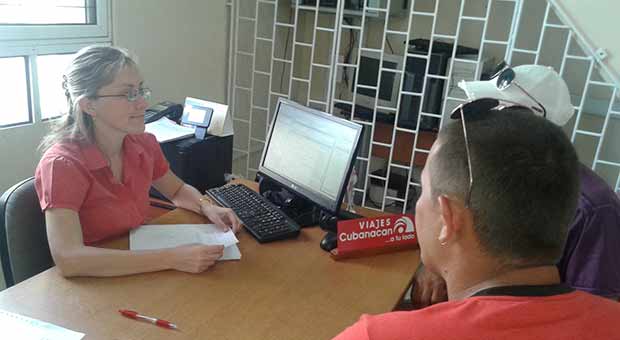 A new initiative increased business between state and private tourism entrepreneurs. Since December 2013 it is possible for travel agents to manage reservations for accommodation, food and transportation to a private provider of services.

The move is another step toward the opening of trade relations of this kind in Cuba, for several decades limited when not prohibited.

“The non-state accommodation houses have solved a major problem in this high season,” the seller of the state agency Havanatur in the central Cuban provinces, Jose Diaz Guerrero, says and reveals that the diversion of customers to private hostels have solved the overbooking problem of state hotels.

“Before we had to move groups of travelers seeking the city tourism to distant facilities, 15 and 20 kilometers away from the cities, besides changing their type of offer by the sun and beach modality,” Yana Korucienko González, seller at the Cubanacan agency, said.

“Now we can keep them in the cities and give them even more personalized treatment, because the hostel is very familiar,” she added.

The “safe” flow of tourists

Villa Lagarto is a house for rent with four rooms, restaurant and private dock located a few hundred meters of the iconic Hotel Jagua in Cienfuegos. Its owner, Leonard Antonio Ordoñez, described as very beneficial the contract he has with Havanatur.

“I work with agencies because that way I avoid paying commissions to those who go” hunting” tourists through the streets and bus stations and get a relatively secure flow of customers,” explains while acknowledging that the new measure has not deployed its full potential.

“There are still fears in both parties. I think that even the agencies prioritize sending people, for example, to state restaurants, because it has always been their social order, but I appreciate how the trend is growing among them to send groups to where quality primes and hence private businesses have gained much space, “he abounds.

With the optimism that has attracted this option contrast the criteria that consider drivers and tour guides as the real holders of power to decide where visitors will leave their money.

“Maybe at the beginning of this opening drivers and guides could influence, but that has changed and now they can do a lot less,” Leonard Ordoñez says, who thinks restaurants that have built a reputation for quality service clearly deserve favor from foreign and Cuban tour leaders.

Misinformation seems to determine the low number of private businesses with contracts of state representation.

In the city of Cienfuegos, with over 300 available rooms just have a dozen working contracts with agencies , and in Trinidad , with an extended network of hostels, there are only about 50 contracts.

The process demanded in the beginning agency’s personal contacts with owners, but that road was not covered at all.

“Two months ago we talked about the initiative at a meeting with officials of the Ministry of Tourism, and they announced visits to categorize lodgments, but no one has come here,” Odalys, owner of a guesthouse in central Santa Clara Street, in Cienfuegos, says.

” I really think it was an excellent idea, because that way they could organize the arrival of more tourists to places of rest and pleasure, and substitute the so- called” hustlers “who are officially licensed tourism managers often scare travelers with their poor self-image and their persecutions “she says.

However, agencies claim to have the doors open to anyone interested.

“These days we received several requests for farms and restaurants. Now we go to ensure they comply with the requirements of hygiene, safety, lighting facilities and information to customers, ” Diaz Guerrero says

“Many homeowners have not joined because they see the requirement to process payments through bank transfers as a way to control the income,” he says.

That finding is confirmed by Antonio Leonard, who shows no objection to transparently manage his income for the tax authorities.

“If you want to project seriousness and professionalism in business, being associated to government entities helps a lot, and this is a facility that my colleagues should use more often,” he says.

Time is in favor of this alternative, as even the scope of the contract was extended to carriers.

“With the state transportation we have historically had serious problems. We have never failed to provide a service to clients, who have requested a transfer from one point to another, but it was very cumbersome to confirm the day and time scheduled, “a Havanatur representative admits.

“So we opened up the possibility of hiring private transport with equipment meeting the technical requirements for these services,” he announces.

The next step for coordination between private and state waits to become natural. “The success of this negotiation will knock down prejudice,” Jose says.