The high point of the Major League season has arrived. Philadelphia and Houston will be the cities connected in the Fall Classic to define the champion of the best baseball in the world. 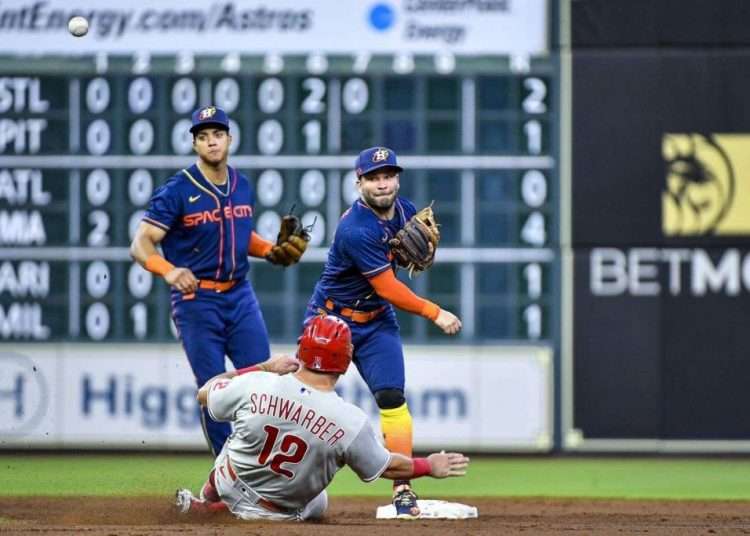 As happens every year at the end of October, the baseball world will come to a standstill for one reason: the Major League Baseball World Series. This time around, the Houston Astros and Philadelphia Phillies will meet in an unprecedented Fall Classic, which will connect two cities separated by more than 1,500 miles, although in reality that is a path that both teams have traveled much more than we can imagine.

Tonight, when the voice of ¡Play ball! Is heard at Minute Maid Park in Houston, will revive one of the most recurring rivalries between the early 1960s and late 1990s will be relived, a period in which the Astros and Phillies met in more than 470 games, including a Championship Series in 1980.

To understand this phenomenon, it’s necessary to go back in time to the beginning of the Expansion Era in MLB, which allowed Houston to enter the National League. The Texas franchise debuted under the name of Houston Colt. 45s on April 10, 1962, and three days later they played their first game against the Phillies.

In the old Shiba Park, already known at that time as Connie Mack Stadium, Houston and Philadelphia crossed for the first time exactly 60 years ago, the Phillies emerged victorious with a 3-2 score, with a marked role for Cuban outfielder Tony González, who defined the clash with a triple RBI in the eighth inning, shortly after hitting a solo home run.

That was the beginning of an era of constant Philadelphia vs. Houston confrontations. Between 1962 and 2000, for example, they met in 490 games, with 256 wins for the Phillies and 234 for the Astros. From 2001 to date, the duels decreased (85) and the dominance was reversed, since the Astros have won 47 times against 38 defeats, although since they went to the American League in 2013 their balance is negative: 4-5 .

The high point of this rivalry was in 1980, when the Phillies and Astros collided in the National League Championship Series. That was a memorable duel that extended to the limit of five games, four of them defined in extra innings.

Philadelphia came out ahead with a victory in the first game, then lost two and were on the brink of the abyss, but they reacted and came back in the Astrodome, with crucial contributions from Greg Luzinski and Manny Trillo, the latter selected as the Most Valuable Player of the Series.

That was the prelude to the Phillies’ third place in the World Series and the first title in franchise history. After unseating Houston, they followed the same path against the Kansas City Royals, supported by the stellar performance of their star, Mike Schmidt, who hit a couple of home runs, drove in seven runs and averaged .381 in the six duels that the Fall Classic lasted.

Since then, the Astros and Phillies have never come face to face in the postseason, until the imminent meet that will take place as of today. If in 1962, when they met for the first time, a Cuban was the protagonist, now the players from the island are capturing the attention of the opposite side, since the Astros have bet heavily on Cuban talent in recent years.

Yordan Álvarez, Yuli Gurriel and Aledmys Díaz are the visible faces of that play, although many other young Cubans are battling on the franchise’s farms to reach the Major Leagues. Precisely, that marked preference for players from the island has caused Houston to be the team of the people in Cuba right now.

For this World Series, a considerable group of Cubans will support the Astros and will shout loudly every success of Yordan, Yuli and Aledmys. However, it will not be an easy duel for the Astros, who will face the momentum and rebellion of the Phillies. In order to better understand the scenario that we will face in the coming days, we present some keys to the decisive duel of the Major League season.

The 2022 World Series will be a train wreck between two teams with different realities during recent seasons. On one side we have the best team in the American League in recent years, as illustrated by the fact that they have made it to the Fall Classic four times from 2017 to date. On the other is a team that hasn’t played on baseball’s biggest stage since 2009 and has been absent from the postseason for the past decade.

Dusty Baker Jr., sponsored by Hank Aaron in the Minor Leagues and the helmsman who has led five different teams to the postseason, will have perhaps his last chance at a championship ring. “Well, I’m actually prouder to be back in the Worrrld Serrrieees,” he exclaimed after the Astros’ defeat of the Yankees in the American League Championship Series.

For his part, Rob Thomson, the pride of Chemical Valley, rescued a team with a balance of 22-26 in early June and guided them to the playoffs. This October, his squad is the classic David who has defeated many Goliaths. Hello Cardinals, Dodgers and Braves!

The time has come to analyze each organization, let’s take a look at their advantages, weaknesses and the keys that can take each one to the top of baseball. Also, at the end of the column, we will leave the prediction of the series.

Keys for the Phillies to be champions

* Their rotation especially needs to be answer by Aaron Nola and Zack Wheeler. The Phillies have the most quality starts by their openers in this postseason (six), all of them coming from Nola (two) and Wheeler (four). Both should deliver quality openings in the World Series if they want to uncork the champagne at the end.

* The opening pitching has worked in 55% of the innings that the Phillies staff has added in these playoffs. In a way, that helped the bullpen have fewer workloads.

* The contribution of the third opener will be essential. In this case, it has been the Venezuelan Ranger Suárez, but its helmsman can surprise with another opener in the series.

Philadelphia is the team with the most mistakes made this postseason (five), although none of them ended up costing them a victory. Recall, in Game 3 of the Championship Series, Jean Segura went from villain to hero, patching up the defensive mistake with an RBI single.

But in the American League it was the opposite. The Yankees lost two games because of mistakes. If you give the Astros the tip of a finger, they will make the most of it. Therefore, the Phillies’ defense must be focused in not giving up advantages.

The Phillies have had the best offense of the postseason: it is the one that scores the most runs (57), the one that connects the most home runs (16) and the one with the best OPS (.749) among the teams that played in the Championship Series.

Now, it won’t be the first time that an “on fire” offense has gone out in the World Series and the best example of that is the 2021 Astros, who were handcuffed by the Braves’ pitching in the Fall Classic.

The president of operations, Dave Dombrowski, bet on a great offense before Opening Day, so he hired Kyle Schwarber and Nick Castellanos to join them with J.T. Realmuto, Rhys Hoskins and Bryce Harper. Now, the final test has come for them.

After being in the top 10 worst relief staffs in the regular season, Rob Thomson has done well with his troubleshooters this postseason. In part, because he has changed the role of several openers and because José Alvarado and Seranthony Domínguez have become the fundamental pieces of the bullpen.

While the Phillies need Alvarado and Dominguez to keep their version for the World Series, they’ll need to bring in other arms, so they don’t overload them. For that, they expect a good version from Andrew Bellati, David Robertson, Zach Efflin or Connor Brogdon. If opening pitching fails, long relief with Noah Syndergaard and Kyle Gibson may be the option.

The truth is that in the middle of the bullpen era, closers are essential to win the World Series. While the Phillies are built on a foundation of good opening pitching, the reliever must maintain his composure to achieve the big goal.

Lastly, it is important that they take advantage of their local games. In the current postseason they are 5-0 at Citizens Bank Park. In that span, their hitters post a .975 OPS and their pitchers post a 2.60 ERA. When they are the visiting team, the OPS drops to .556 and the ERA rises to 3.46. The positive point is that they managed to split (1-1) when they started playing away from home in the Divisional and Championship Series. They should be thinking the same thing now at Minute Maid Park.

Keys for the Astros to be champions

The Astros have come to the World Series winning close games and showing that they are better, not because of sheer dominance, but because of elite accuracy and great pitching depth.

Why didn’t the Astros win last year? It is the first question we have to ask ourselves. The first reason is that their offense couldn’t keep up, and the second is that their opening pitching collapsed, allowing 16 runs in 20 innings against Atlanta.

A year later, the Astros’ rotation has improved. This time it will be Lance McCullers Jr., who was injured last year after the Divisional Series. Also, the ace, Justin Verlander, has returned. To top it off, Framber Valdez is coming from his best campaign. To that trio can be added Cristian Javier and Luis García.

The bullpen, despite the loss of Phill Maton, has improved from 2021 to 2022. The addition of Héctor Neris and the great work of Rafael Montero have been essential. Also, Bryan Abreu has had his impact campaign.

By the way, draw the following conclusion: Ryne Stanek pitched 11 innings last postseason and he’s only had two innings in this postseason. Dusty Baker can use more his fresh arms. José Urquidy may be another option even though he hasn’t thrown a pitch in these playoffs.

Don’t throw too many fastballs! The Phillies’ offense has been a fastball hitting machine this postseason, hitting .247 with a .517 slugging percentage against fast pitches and hitting 12 of 16 homers against them.

So maybe we’ll see the Astros take a similar approach to what they did with the Yankees: less speed and more spin. The Astros threw breaking balls against New York hitters 42.9% of the time. That’s the highest percentage of pitches broken in a Championship Series since every pitch has been tracked.

On the other hand, the Astros’ offense hasn’t been amazing this postseason, but don’t kid yourself, it’s one of the best in the game. If Kyle Tucker and José Altuve start the engines, we can see a show of orange artillery.

In short, the Astros have to continue being themselves in this World Series, if that happens, the odds are very high for them to win the second Fall Classic in their history.

Our forecast is for the Astros is a 4-2, based on the depth of their pitching, which should prevail in this series. Of course, everything will depend on the performance of the Phillies’ offense. Likewise, let’s remember that surprises are present in every postseason and if Rob Thomson’s team wins, it wouldn’t be amazing.