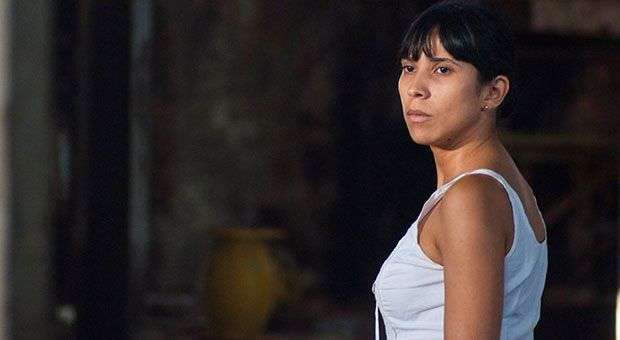 She was Sonia in Conducta, Luz Marina in Aire Frio (Cold Air) … and a lot of characters that shape a thriving career that barely started. She is Leoni’s wife, the mother of Sebastian, the Yuliet of TB prime time show Piso 6 (6Th Floor) is also the daughter and woman of the times.

Yuliet Cruz is a talented actress, and a lucky one. She admits it.

Although her face is unusual in soap operas, at which time most people worship the television; she has been noted by, major and minor, appearances in teleplays and other programs.

Also, her continuous musical presentation at the 6th Floor magazine has earned her a name over the characters she has performed.

In the movies she is another one of those women who has been touched by the magic wand of directors, while nullifying doubts about her worth.

She has let us feel the depth of a psychological training, stretching the limits of interpretation at the crossroads of illustrating to an alcoholic and carefree mother, and being a mom who does not want to go at night to work to be with her little one.

And what about the theater!

The tables have revealed us a volcano of feelings; always showing the balance of feeling, the indecision that makes us human.

Despite her deserved glory, not always well recognized, and her job opportunities within and outside the island, Yuliet Cruz is still a young Cuban actress and as such, she suffers.

How do you manifest the presence of women in the media, from the physical presence and from a psychological perspective?

I must start by saying that Cuba is a macho country, both men and women behave accordingly. And so we raise our children. Therefore, the primacy of man is brutal.

Not many attractive female characters, well-structured, created according to the real problem are written today.

There are very few women creating, or very few with the opportunity to realize their projects.

Out of the men who do it only some have a deep feminine vision for a TV script or film, free from discrimination, cultural brand or stereotypes.

Moreover, the presence of actresses depends on personal conditions. Those who have children, like me, we have things a bit more complicated. Every day of my life I must thank my mother for her support. My achievements are always backed her. But many of my friends do not have their mothers near or willing to support them. They had to go to neighbors to ensure the care of their children, because this profession does not have specific times. In the worst case, they had to reject an offer.
In the productions made in Cuba these typical situations of the women are not taken into account. Elsewhere, in the same workspace they are responsible for providing personnel capable of caring for the children of these actresses to give them tranquility and a chance for a good performance.

How do you rate the design of female characters that are over forty?

There is a very dark era for actresses in this country: when you stop being a visually desirable woman and get over 35 years until you are already a grandmother recognized in all aspects.

For most people in Cuba a forty -something is old. From it, unfortunately, writers and directors are not immune. So when the time comes you don’t take a role; you become the mother of this, the aunt of the other … It is not very difficult to find a character to this age with all its nuances. The productive period of the actresses in this country is shortened, and not a few to which life is going by without work.

In these contexts inter generational contradictions are born that besides breaking the equilibrium of society, reduce results in any field. What position do you assume in the face of such problems?

Generations have fought with the argument that the old have the truth and young people have much to learn.

Everything has a time and a moment. It is supposed that those who pass a certain age have accumulated a monetary flow and trajectory of life adequate to retire to his house and live their retirement. Thus, those who wish it can continue without voiding the time of those who follow them.

What happens in Cuba, and has become a phenomenon, is that you do not get recognized by anything or have a place until you comb gray hair.

Like that it is not worth it. It does not always work that you achieve things when you’re old. We have felt that we have the position corresponding us. Then we stop and say, why I am doing this if I lose the best times of my life.

We must encourage young people, because we are the base, the ones that generate and grow the profession in our hands.

Everything has its place and everything should get its value. I do not agree with those that categorize as immature or irresponsible to us that are just beginning; or a boy or girl cannot take that commitment for lack of experience.

There are extremely competent young people to accept specific responsibilities. I also consider that those who are not able to understand the development and carry it over, no matter how old are unfit for any management position.

In the performing arts these conflicts become more complex. There was a time when the teenage characters were given to women of thirty. Today they are who do not have opportunities.

What do you go around the grounds of spiritual enjoyment of a job and go looking for material reward?

In life there are things we should value, and from them, carve a path, a career. But this only happens in Cuba. Our mission is to live in the world, and we need to buy this, that … So we opted for something to make money, without stopping from doing things with respect to oneself and the profession.

I have tried to achieve more accurate groping steps, and I must thank my family and my husband, who have protected my decisions.

In the scenarios, we theater people leave our life. Here are our dreams, all … Working in nightclubs for a living and supporting the theater, when I love being at home with my family. I have also done television spots which I got nothing, only long-term recognition.

But let’s not be extremists, in life you cannot always do what you want.

If Moscow does not believe in tears, Domadores don’t either