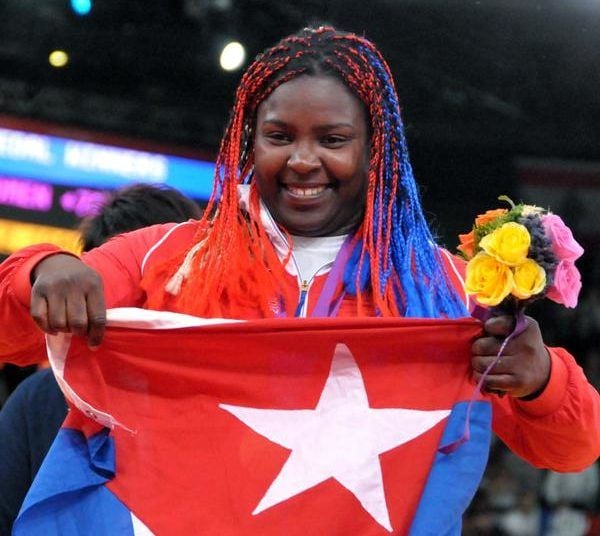 I ran into her outside the Judo Gymnasium at the Cerro Pelado High Performance Center. She was talking with several team-mates during a break. You could hear the sound of bodies falling hard on the mattress inside the gym. I could see some surprise in her eyes when I stretched her hand gently in greeting. I identified myself and she gave me a smile from my first greeting.

-Let´s ask the professor for permission, she told me when she heard my interview proposal. (later she told me training was sacred and only Professor Ronaldo Veitia could authorize another activity at that time).

With the authorization granted we sat have a dialogue in the chair of the gym, a small air-conditioned place that displays in its walls Cuban history in the mats. In one corner are the latest images, the Olympic champion in the sport in London 2012. At my side, ready to answer questions for the OnCuba readers, the protagonist of this feat: Idalys Bocourt Ortiz.

When did you start practicing judo?

In my family there was always a sporting tradition. My brother practiced boxing and my sister went through judo. I was a stout girl. One day I was walking down the street with my mom and the judo teacher approached to see if I was interested. I said yes and I started when I was 10. But I missed too many classes because the training field was too far away from the house. I went to my first competitions and I did well. By 2000 I was selected to enrol in the Ormani Arenado Initiation Sports School (Eide) in Pinar del Rio, and from there I began to devote my life to this specialty.

From very young you take over position in the national team. How did you do it?

I spent four years in the Eide until I was promoted to the national team. I was 15. This division had five athletes. I started to earn my place with dedication. The main figure was Ivis Dueñas, who is worthy of my respect for her human quality, she has a lot to do with my results. For me the key was the effort, since I was the youngest I knew I had to work twice as hard. I went to the 2007 Rio de Janiero World Championships and finished fifth. But my inclusion in the elite came a year later, when I attended the 2008 Beijing Olympics at 18 and returned with a bronze medal.

How have you kept that surprising stability in the awards podium for four years?

In Beijing I lost to Chinese Weng Tong and I was not satisfied. I think I had opportunities to do things better. So after that I stuck to the idea that I had no easy opponents, and fought each match like a final. Maybe that’s the secret to keeping the level: leave all the stress on the tatami.

I had a tough draw, again I had to face Chinese Tong. But I was ready to win every fight, I was ready for it. Many believe I won that crown me precisely in the semifinal against Tong, but I disagree, this win was important as all the others but the gold medal I won it in the final when the referee raised my flag unanimously in hantei (judges decision). I felt an overwhelming emotion. 12 years had passed since the last time a Cuban woman had reached the top of the Olympic podium.

What does being the first Cuban Olympic champion in the +78 kg division mean to you?

A higher challenge. Imagine that in super heavy weight division were the likes of Estela Rodriguez and Daima Beltran. They are my role models. They are Olympic champions in life. Daima went to London with the delegation of Mexico, but was constantly aware of my performance. She gave me encouragement and told me I had to accomplish what they could not. she have been very supportive and I appreciate that a lot.

Idalys announced her next goal is the Team World Championship to be held in Brazil October 27-28. She knows her gold medal at the Olympics raised the stakes. “Thanks to all that trust me, to those that congratulated me in the street, those that fought along me in each fight in London. I enjoy having a people that admire me and love me. Now I can not fail them”.

She was a doctor, was a transvestite, was a woman…