To achieve this new world record, Erick was unable to complete his training given that for several weeks he spent most of his time focused on the recovery and rehabilitation of his brother Douglas, who suffered a stroke. 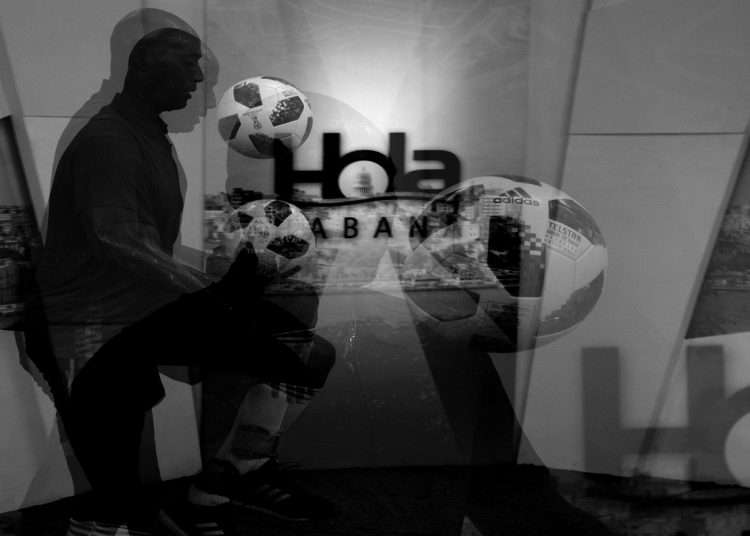 Erick Hernández sets a new world record in the mastering of the ball, only with his thighs and with weight on his ankles. Photo: Ricardo López Hevia.

After last September 26, when he left the stage injured and feeling enormously impotent for not being able to complete one of his already usual acts of magic with the ball, Cuban dominator Erick Hernández appeared before the cameras this Sunday and once again hypnotized us for 1,846 seconds.

That was the exact time it took to surpass himself and establish a new world record in the Canal Habana studios located in Mazón and San Miguel — one of the most famous corners of the Cuban capital — where he showed his skills and hit the ball 2,902 times only with the thighs and with 1.5 kilograms of weight on each ankle.

Perhaps it seems that half hour and almost 3,000 strokes of the ball are not significant, especially if we’re talking about Erick, a man who has been dominating the ball for more than 19 hours with more than 60,000 touches in some of his records. However, this is a story in which “how it has been achieved” rather than “what has been achieved” matters more.

Looking back, the Cuban dominator broke his own record in the modality, which dated from 2019, when he touched the ball 2,739 times only with his thighs and the same weight of 1.5 kilograms in each of his ankles. A priori, taking a record of this type a little further represents a challenge, but an extra-class like Erick can achieve it with the necessary amount of preparation and concentration.

However, the experienced specialist was unable to complete a training stage at the height of the circumstances in recent months, nor was he exclusively focused on the goal, after his brother Douglas — a pioneer in this art of mastering the ball — suffered a stroke a few weeks ago.

The news was a huge blow to Erick, who has had a counselor and spiritual guide in Douglas for years. In addition, the event itself totally altered his routines, with fewer hours of preparatory work, fewer hours of rest, and greater emotional tension in the face of the danger faced by his brother.

“Usually when I set out in search of a record I focus only on that because psychological preparation is as important as physical preparation. Now all that was affected, the strategy collapsed because I had the responsibility of being with my brother in the hospital, watching over his health,” explained Erick through colleague Ricardo López Hevia.

For several weeks, the dominator spent most of his time focused on Douglas’s recovery and rehabilitation and only trained in a few of his spare moments. The work-rest correlation simply disappeared, which can be fatal for a high-performance athlete, but Erick managed to overcome and meet deadlines and demands.

1. Erick Hernández sets a new world record in the mastering of the ball, only with his thighs and with weight on his ankles. Photo: Ricardo López Hevia.

2. Erick Hernández sets a new world record in the mastering of the ball, only with his thighs and with weight on his ankles. Photo: Ricardo López Hevia.

3. Erick Hernández sets a new world record in the mastering of the ball, only with his thighs and with weight on his ankles. Photo: Ricardo López Hevia.

“I put a lot of effort into the preparation. I had to look after my brother, I owe him a lot. This record is dedicated to him, who is watching us. Fortunately, he has evolved well and we hope he will have a speedy recovery. In addition, this record is dedicated to the Day of Physical Culture and Sports, which was celebrated on November 19,” Erick specified in the television broadcast this Sunday, after completing the exercise before the eyes of the judges.

Visibly moved, the dominator also thanked the support of presenter Héctor Villar and the Canal Habana TV channel, a space that has become his second home by serving as an analyst in ita programs dedicated to soccer. They have reached out to him and given him the opportunity to show his knowledge of the most universal of sports.

Due to the number of records that Erick has achieved in his very long career, anyone would think that these attempts are a mere formality, but in reality they carry a supreme level of preparation, without forgetting that there is always the risk of not being able to complete the records for various reasons.

In this case, in addition to the mental strain and the logical concern for the family situation, Erick also had to overcome an uncomfortable injury. As we had already mentioned, on September 26, just before trying to break this same hitting primacy with only the thighs and weight on the ankles, some discomfort in the lower back during the warm-up prevented him from going on stage.

This ailment was a major setback and forced him to make variations in his preparation, with special emphasis on the affected area. Knowing what was at stake, the experienced dominator got down to work and increased the strength exercises and others to strengthen abs, quadriceps and calves, taking into account the characteristics of this record.

“It is an extremely difficult record, which requires a lot of intensity. You have to take great care of your hitting angles because if the ball goes a little forward, it is already difficult to control it, more so with weight on the ankles,” he pointed out during the television broadcast this Sunday.

When the ball is hit with one foot, all the weight of the body falls on the other, which is why it was so important to strengthen the lower body, added Erick, who has once again demonstrated his great physical and mental capacity.

At 55, we might think that Erick Hernández is going to stop, but his desires and will to show the world his skills in controlling the ball are still intact. He did not stop at this stage of the pandemic — he has already completed three records between 2020 and 2021 — and next year he will return with new challenges.

Without a doubt, in addition to his ability to hypnotize the ball, Erick Hernández is a king of perseverance.