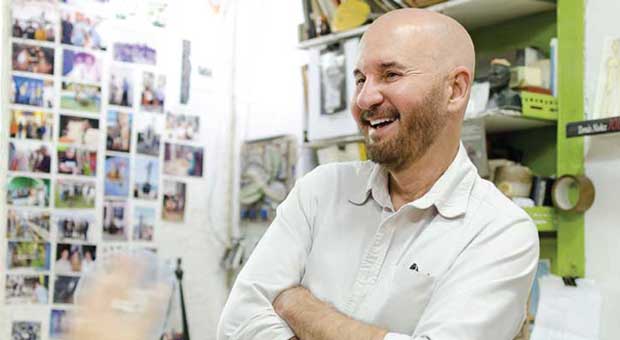 “Cuba is something from which I’ve never been able to disengage. Because of certain circumstances –I was given no other choice– I went to Mexico in 1993 and then to Miami, but just two years after leaving, I returned to Havana, and since then I have been coming at least once every 12 months. I have participated in many different cultural events, such as landscape exhibitions, and have given talks to students. I attended the 10th Havana Biennale (2009), participating in an exhibition with my late teachers, Servando Cabrera Moreno and Antonia Eiriz, and in a collective exhibition that was organized by Kcho (Alexis Leiva Machado) at the Convent of San Francisco de Asís. When I come, I paint ceramics, but I feel that, actually, I’ve never left Cuba. In 1995 I discovered Costa Rica, and I settled down there.”

These statements were provided to OnCuba in an exclusive interview by the celebrated painter, engraver and sculptor Tomás Sánchez, one of the most sought-after contemporary Cuban artists, who vehemently asserts that he has always championed the idea of a single Cuban culture: “Wherever there is a Cuban who is making art –be it painting, literature, film or any other expression– and even if it is in the North Pole, that is Cuban culture. I continue to defend that idea, and I will continue participating in the cultural life of the United States, and I will continue participating in Cuba’s cultural life. There is only one Cuban culture, but at the same time, it is multiple and diverse, and different viewpoints need to exist that are in contradiction and dialogue. Otherwise, you are pigeonholed, with the attempt to impose a single idea on everybody, and that kind of position leads to decline.”

Born in the central-southern region of Cienfuegos province (Aguada de Pasajeros, May 22, 1948), Tomás Sánchez had a “beautiful childhood,” he says. However, his health was affected by arthritis: “At the age of seven I had a crisis, and I was disabled for a long time. I would spend much of the day in the patio, lying on the floor and drawing.” He remembers that his mother infused him with an interest in nature, as did his grandfather, who was a gardener at one of the sugar mills owned by the sugar magnate Julio Lobo. “Conversations with my grandfather were about two things: Spain and plants. In the afternoon, my mother would sit down with me and my brother to watch the sunset; it was a ritual. She gave me a wall in the house to draw on, and when nothing else fit in that space, she painted it white so that I could continue drawing.”

In 1964 he enrolled in the San Alejandro National School of Fine Arts (Academia Nacional de Bellas Artes San Alejandro), where at first he felt like a dazzled hick, he says. “I would attend classes in the afternoon session, where most of the students were older than I was, and sometimes I felt like an outsider; nevertheless, I was able to fit in quite well. I had professors who were very affectionate with me and I remember them very fondly. I learned technique, how to use colors, how to apply and mix them. San Alejandro provided me with tools, but I was stifled by the rigidness of academic life; I wanted to make modern art, to experiment. One day, I read an article in the magazine Cuba about Antonia Eiriz and it made a huge impact on me.”

Sánchez admits to feeling eternally grateful to Eiriz, “a person who encouraged creativity, and who would say what she thought with total sincerity. That moved me. When she used harsh words with me, I knew that she did so because she cared about me. She is one of the people whom I have loved the most in my life.”

The National School of the Arts (Escuela Nacional de Arte, ENA) was a defining experience for him. “When I arrived (at the school) in Cubanacán, I, who considered myself a crazy young guy, found myself surrounded by others who were just as crazy, and I said to myself, ‘I belong here!’” In 1976, he began teaching at the ENA and was appointed chairman of the Engraving Department, a very useful experience. “I love to share; I am a person who loves to be alone to meditate, and then afterwards, to share with everybody. I have been very solitary and very social at the same time; it is a balance between the two. Being a professor made me learn new things and then teach them, and I really enjoyed teaching, even though it was a challenge. With 56 students doing lithography, I was practicing lithography 56 times. I was very fortunate to have immensely talented students, such as Flavio Garciandía, Rogelio López Marín (Gory), Cosme Proenza, Moisés Finalé, Zaida del Río, Pablo Borges, Gustavo Pérez Monzón, and many others.”

The year 1980 was decisive for him; he won the 12th “Joan Miró” international drawing award, and his meteoric career took off. “It was excellent, and moreover, I was surrounded by magical events. I became convinced that, through so many years of meditation, I was becoming connected to something that, in its turn, is connected to everything. It also allowed me to feel a very deep respect for Afro-Cuban religion, even though I do not practice any.”

Sánchez is an artist who works with big themes or lines: landscapes, landfills and crucifixions, which he alternates or combines, and that is why he does not think it is correct to talk to him about stages. “I began working with the theme of crucifixions when I was in school, and it has been a constant; I began using the landfill theme in the 1980s, and continue to do so; and the landscapes, whether or not they include a human figure, are a reflection of the mind when it is calm. I don’t paint landscapes, I paint states of mind. I did not start out depicting grand landscapes of nature; I started out with the nearest empty lot, that is, suburban nature, and not a grand landscape, which I began to discover subsequently, such as an immense tropical jungle, or the great banks of rivers and lakes. That began to appear later on, but at first it was the need to express what I was feeling. It was a cult to nature. My landscape moves between the whole and the parts.”

Meticulous with detail, Sánchez says that when he paints, he feels an urgent need to express diversity: “In many of my paintings, you will find the contrast between totally white spaces –without any work, the absolutely pure paper or canvas– and spaces that are densely worked in all kinds of details. I enjoy creating the details, and there is a philosophical concept behind that, to the extent that I forget that the painting was for next week, and I stop participating in everything and I don’t care. For me, the greatest thing about my work is that I enjoy doing it.”

He confirmed to OnCuba that he has not held a commercial exhibition since 2005, and that even though he knows that some critics say that he is the architect of the vindication of Cuban landscape paintings, he suggests to all painters that they look deep inside and make their own landscapes, expressing their own personal sensations.

Tomás Sánchez, who graciously chatted with OnCuba for more than an hour and a half, emphasized that his most recent visit to Havana had two main purposes: to make a piece that will participate (in April) in a collective project called Alboroto quieto –which is led by sculptor Tomás Núñez (Johny) and which includes 36 artists who will leave their mark on ceramics– and to evaluate the possibility of holding an exhibition in Havana. “For many years, I’ve wanted to do a solo exhibition in Cuba. I think it would make even many of my landscape followers reflect, because they would realize that I am not just a landscapist –and I don’t discriminate against anyone who is solely a landscapist– but that I have many concerns that I express through my art.”

Hopefully, that dream will become a reality, and here in Cuba, we will be able to appreciate his landscapes and sculptures, the art/object that he is developing, his boxes with images that are multiplied in mirrors, maybe even some of the jewelry designs in which he is immersed, and surely, a selection of his photographs, another art that he cultivates very successfully. I hope so!