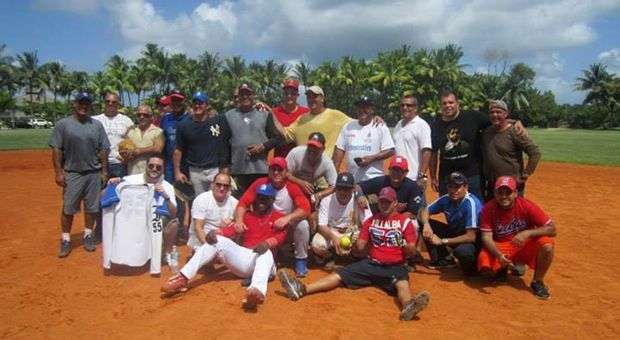 Veteran players from Industriales who traveled to Miami went to the stadium, first as spectators and then with their mind focused on the games they will play on Friday, August 23 and Saturday 24 in the Alonso High School in Tampa .

On Wednesday night, the ten players from the Cuban capital made ​​a visit to Marlins Park, home of the Miami Marlins, who faced the Los Angeles Dodgers, both teams had Cuban presence in the field: Adeiny Hechevarría by the ‘fishes’ and the sensational rookie Yasiel Puig for the squad from California.

As reported by the colleague Yasel Porto from Miami, Vargas, Padilla, Anglada and the others signed autographs all night and shared with their accustomed humbleness with all the fans who recognized them, asking for a picture or just talking about baseball.

The fans of Industriales who are now based in Miami had a unique opportunity to share with glorious players who have written in golden pages the history of the most successful Cuban baseball team.

“I came here just to see Anglada, Capiró, Medina, etc. I do not care about the Marlins too much, but the Industriales are my life, and those great I mentioned are the maximum for me, “the fan Oscar Brito, one of the many who approached the group, told Porto.

Meanwhile, another fan, Evelio Hernandez said: “I heard that Industriales came to the stadium today, and I had to be here at least for a minute. To me that is worth more than attending the stadium. I do not come here ever, but I did it today, because of them; due to Javier, who was my idol, Padilla, Vargas, and well, all of them that are in this place who have a tremendous history. For each of those criticizing their presence here, there are 10 like me who love them to death, and will always support them by having given us so much joy when we were in Cuba “.

In turn, the ex-players were pleased to witness the spectacle and share with the Cuban luminaries who succeed in the majors, and according to their overwhelming criteria, this is an example that Cuban baseball has enough quality to impose itself in the most demanding scenario of the planet.

But the energy of these Havana’s veteran players has no limit, and after the hectic night they attended Coconut Grove Softball Park to train for the first game that will be held in Tampa on Friday.

“The shape shown by them was impressive, especially when batting, including pitcher Lazaro Valle, who had a remarkable offensive performance which made us remember his initial years as a hitter. Rey Vicente Anglada, Enrique Diaz and Lazaro Vargas also hit solidly in most of their at-bats, “journalist Yasel Porto reported.

Meanwhile, Enrique Diaz, historical leader in stolen bases in Cuban baseball, confidently alerted of the blue power to their opponents, a team of Cuban stars residents in the United States.

“All the All-Star pitchers must be well prepared because I as leadoff hitter will show that I cannot just hit and shine in a training game.”

Valle also challenged the opposing batters and his potential adversary from the box, Villa Clara’s Rolando Arrojo. “I’m 51 but my fastball has almost the same speed as when I struck them all out in Cuba.”

The table is served and the dish is undoubtedly exquisite because their rivals will be Yobal Duenas, Pedro Luis Rodríguez, Juan Carlos Millan, Angel Lopez, Maels Rodriguez, Rolando Arrojo, Jorge Diaz, Osmani Garcia, Luis Enrique Piloto and Alain Soler plus American Ty Griffin, last minute guest that further honors the game to pay homage to half a century of Industriales.