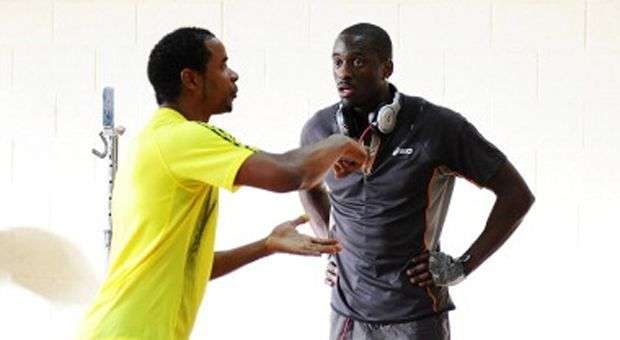 We had to wait till the World Athletics held in Moscow to finally know the whereabouts of Ivan Pedroso. Many did not know that for a little over two and a half years, the Cuban Olympic and world champion has been the coach of French triple jumper Teddy Tamgho.

The image of Pedroso perched on the decks of the Luzhniki stadium giving advice, surprised some on the island.  The cameras showed the Cuban former star repeatedly in the triple jump final that his pupil won.

Above all, the remembrance of that passage will be stored forever in the retina at of those enjoying that moment when Cuban athlete Pedro Pablo Pichardo was competing. And not because of Triple P and his 21 years, who was the best of Cuba in Moscow, nor because his 17.68 m jump with was a very respectable leap, no. The fact is that those who witnessed that excellent Cuban’s hopping sequences were perplexed with his rival, Frenchman Teddy Tamgho.

Beyond the amazing French stretching to 18.04 meters, the third man to exceed 18 meters in history, the competition generated a dual meet between the two jumpers. In the stands, with polished white sweater with blue letters enunciating “FRANCE”, Ivan Pedroso was finally shown on Cuba’s national television under his new role as trainer.

Many lost track of him, but the Cuban grasshopper never retired; he continued his professional career, jumping in mid-level meetings in Europe. Now, for a little over two years Pedroso has been the head coach of Teddy Tamgho, the gold medalist in Moscow. He has stabilized Teddy’s records, despite people saying he had the potential but this was lowered due to his low level of training.

The truth is that since Tangho is under the command of the Cuban, except for interruptions for injuries, the French kangaroo has had no rivals. The Moscow final was a show while Pedroso’s pupil increasingly came away with the momentum of his feet. Not daunted at all by the gesture of Triple P, Teddy Tamgho   responded with almost a declaration of principles: 18.04 m. In the stands his coach was all euphoria. Ivan Pedroso came back to glory.