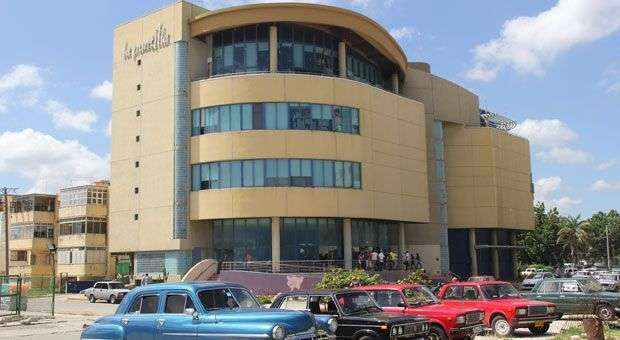 La Puntilla mall, belonging to the CIMEX Corporation retail network, was closed to the public for almost72 hours. Despite being one of the busiest stores in town, they didn’t  warn anybody about this “special situation”, so people needing something and shopping lovers kept coming to the building on First Street between A and B, Playa municipality. Newly reopened, but till a few hours ago you could, even a sa mere spectator approach the entrance and even enter and move a few meters before a couple of workers without the minimum preamble report what, once inside the store, was evident: “It’s closed.” Without any further explanation.

Several sources who asked not to be identified, arguing that they are not authorized to facilitate interviews-even when they are public officials, who owe explanations to the public, described the situation as “absurd”.

As in 2008 when they came to extinguish the fire that occurred at the facility, coincidentally also in the storage area, though not alone in this one- firefighters arrived now, and “didn’t allow us to sell or enter merchandise, because they say that the storage area cannot store anything more.”

A worker says the store is fully stocked for the first time: “Look how cute this market is, there is everything. We had never been so. Virtually all departments are full of products. And there are more containers to come. “Filled shelves are an irony with so much desert escalators and bridges in each of the floors.

Apparently merchandise expected for about a year accumulated. On the other hand, they speak of lack of space in the warehouse, which incurs in a violation of the rules. “They said that was why didn’t let us sell. It is contradictory, because the best way we can liberate spaces is by removal of the products on sale. Not to mention the tens of thousands of CUC lost each day we remain closed to the public “.

The store and its surroundings, as well, were at all times filled with workers. The 191 mall employees must fulfill their regular work schedule. They were seen chatting, doing maintenance, cleaning, some say they have engaged in the transfer and collation of goods, given the circumstances.

The inability of someone authorized to provide reliable information about this unprecedented event, limit us to simply provide superficial comments of some workers, a few conjectures by the public, and the lack of words from an official whose condition prevents him, or so he says,  from making any kind of statement to the media unless he has a written permission. It was the only one who requested it before refusing to offer any explanation.

The mall is open again, but someone must clearly disclose a cause of the interruption of the services of the two boutiques, cafes, and other departments in the center, and, most importantly, to how much losses amount to.

On one hand, store staff said they were banned from selling, under warning of probable charges, for a reason unknown and which in any case would seem absurd, and secondly, authorities refused to clarify their motives, and prevented routine in the mall to normalize.

Meanwhile, the public coming from far or near to shop, walked uncertainly from side to side of the entrance because there wasn’t, at any time, one person in a position to confirm whether it would be available in a few minutes, in a hours, in a few days … that, in exchange for their money, they could get what they needed or wanted.