Just before the Gold Cup debut, national coach Raúl Mederos resignedly observes how he missed the possibility of heading a competitive team, without the option of summoning dozens of soccer players Cuba has scattered around the world with a higher level than those on the island. 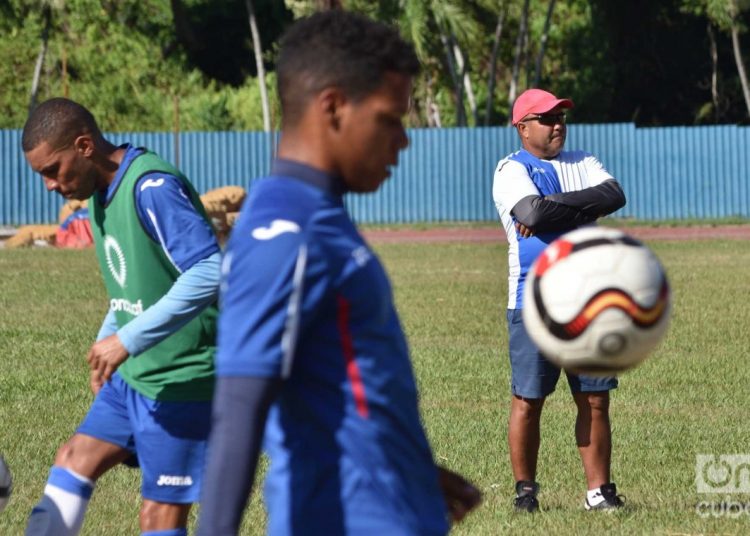 “Three? Four? Five? Who gives more?” This is how the bets stood on how many goals Mexico would score in its game against Cuba in the 2019 Gold Cup, which opened this Saturday at the Rose Bowl in Pasadena, California.

Without a visa for captain Yordan Santa Cruz, without any of the legionnaires who play in diverse professional leagues, and after a terrible preparation that included defeats against lower category teams, the island’s squad couldn’t have a worse outlook.

Coach Raúl Mederos is aware of this. He knows that he has an inexperienced team, with thousands of tactical gaps and inaccessible talent, and he also knows that he can’t do much to change it: his hands are tied.

The team: do what I say and not what I do

Mederos was given the team as a hot potato some time ago, when mentions about it had to do almost exclusively with defeats and massive flight of players in international tournaments.

The coach somehow changed that. The victories in the League of Nations, the classification at the highest level of that tournament for the Gold Cup, and there was also the debate on the possible convocation of Cubans established in other countries, something that fans demanded, but that no one close to the Cuban sports leadership dared to mention.

Mederos had in mind a different project, inclusive, with a natural combination between the island’s best players and the professionals. At first the idea seemed to sink in, and the coach even handed over lists with men of interest and proven quality to join the dynamics of the team.

The names of Onel Hernández, Marcel Hernández and Samuel Malamaki Camacho started coming up, who seemed very close to wearing the four-letter T-shirt. But those were purely blatant appearances….

Gradually, the hopes started vanishing, no one spoke of the subject, and silence, in the context of Cuban sports, only brings bad premonitions. The premonitions, in fact, were confirmed about a month ago, when the already ill-famed national commissioner, Oliet Rodríguez, said that to play with Cuba the soccer players had to travel to the island to go through the exhausting process of reinsertion in local teams.

Breaking with all FIFA standards, breaking the mechanism used by hundreds of countries, breaking even with the logic of the universe, Cuba doesn’t summon its international players, it’s the players themselves who must apply for a call, and not precisely because of what they do on the field.

Already with these engraved guidelines, Mederos was clear about the message: “If you want to continue in the position, do what I say and not what I do. Limit yourself to making decisions on the field, we’ll take care of the rest of the issues, the issues that affect what you do on the field.”

So we’ve gotten to the present day, with a team in a critical clinical state and, the saddest thing, with a selector devoid of freedom in decision-making, if he ever had any. His words to OnCuba, before leaving for the training tours, leave no doubt about it.

“I don’t want to talk more about the issue of the convocation, I don’t have an answer, I can’t resolve anything, in the end I’m just looking for problems. To know, you have to go to INDER and ask those who decide there. For Cuban soccer it would be a success to have all the internationals, but I can’t do anything. I stopped watching videos, following them, I had the idea that it could be resolved in the short term and it won’t be like that.”

Although Cuban players know they must climb a very steep slope in the United States, nothing and nobody can take away their illusion. In their minds, and in that of Mederos, the dream―or utopia―of overcoming the group stage in the Gold Cup is still alive.

“We are focused on competing and getting four to six points to qualify. It is an ambitious goal, we put the pole high, but nothing is impossible. Last November we played in Havana a match against the Dominican Republic, in which few in the press gave us options, but the boys played a great game and we won, which allowed us to gain access to the Gold Cup,” Mederos told OnCuba.

“These same boys are the ones we’re taking, they’re the ones who played that great game. I repeat, the goal in the United States is complicated, but if they maintain the level and play seriously, it is possible to meet it,” added the coach of the Caribbean team, which will be playing against Mexico, Martinique and Canada in the Gold Cup.

In the tournament, Cuba will have the reinforcements of Arichel Hernández, Daniel Luis Sáez, Sandy Sánchez and Andy Baquero, all hired in the Dominican Republic, and it will suffer the absence of Yordan Santa Cruz, who did not get the visa to travel to the United States.

This last detail disrupts plans and schemes, and considerably reduces the possibility of meeting initial expectations. With very few options to obtain the planned results, the team has to evaluate itself in a category scenario, to see if there has been any progress in the tactical issues that always affected it.

“The players must change their mentality in terms of tactical work. That has always been our Achilles’ heel. You have to know where to run and what to do with the ball, two basic details of soccer that often escape the athletes,” said Mederos, who doesn’t want the impending experience to be a mere formality.

“The Gold Cup is a bridge to the League of Nations, our main commitment of the year. But we don’t want to go to the United States now only in passing, to participate and that’s it. We want to compete and show what we can do.”