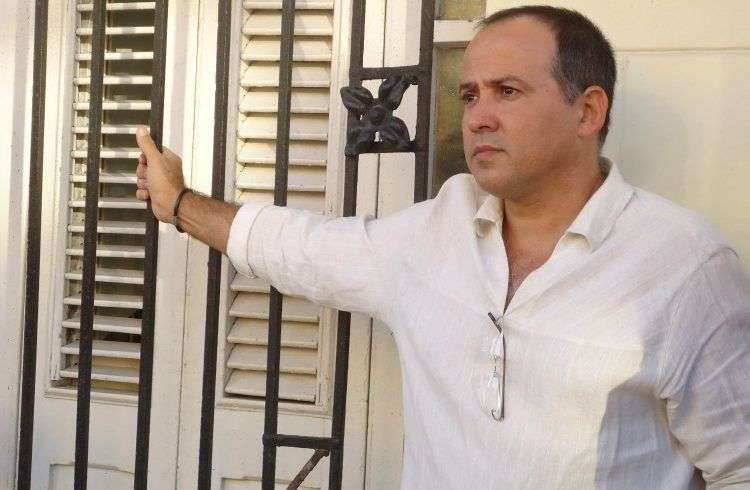 I made a colossal blunder, perhaps heresy. I asked Miguel Chamorro Rocamora what the three letters on the girl’s sweater of the picture mean. Standing in front of the painting, I look and look the hollow eyes of people going in procession. That is the name of that work, Procession. People are walking slowly, staring blankly with craters on their face instead of eyes, but do not stop. Only the girl excels from the crowd with a striped gray sweater and three letters complete uncertainty.

I imagine that the answer is in these letters. Also in the hands clapping, or calling for God knows. And I ask Chamorro just for him, with the utmost kindness in the world , to tell me quietly that it is a secret that everyone must understand it in their own way. That happens to me, I think, for not paying full attention to art appreciation classes; those in which the professor said, “It is not about understanding but to feel”.

I take comfort when knowing that I am not alone on tenterhooks. The poet and essayist Ileana Alvarez said that while reading the work of Chamorro, “every question, every doubt that remains when appreciating his work, encourages us to resist like a snail in the wilderness in search of moisture.” But rationalism emerges, what can I do…?

Miguel Chamorro Rocamora shall not be accused of being afraid of the counts. As one who takes the time even to breathe, he has made a stop in his career in the plastic arts to look at what has been 30 years of creation. With the personal expo Testimonies, he closes a cycle of three decades attached to the heavy machinery that lets him print concepts, shapes, and sensations.

He says he prefers working metal sheets but has been content to collagraph because it is cheaper and from all art movements he feels himself closer to the postwar German Expressionism. He added when he saw Belkys Ayon working he got amazed by her mastery when handling presses and Dürer, the great Spanish engraver, got used to writing backwards by so much creation. “Because when engraving you have to work looking at a mirror for it to return the image to the right position.”

Is it supposed you were a child who painted?

Yes . I was born in Nuevitas and when I was just one my parents moved to San Joaquin, a small town in the coast of Florida. I grew up in a rural setting, very conducive to creation. It was a place in the countryside, in which there were, somehow, a rustic movement of pottery fond people, they loved working with clay. So, my interest in art increasingly emerged. Then in sixth grade, when we already lived in Baraguá, the instructor Aramís Carrera began to guide me along this path. I remember he was in charge of organizing my samples in the lobby of the school and sent my works to competition.

Then there were only drawings. In the family there was no artist. It all began over there. Then I entered the Art Vocational School and once graduate I continued studies at the National School of Art. From the outset I was clear I wanted to be an engraver. In fact the pass of level I did it precisely in Engraving. It was a time when there were not too many problems with the resources this specialty needs. Its complexity was what attracted me most, it liked me, challenged me.

The engraving is very dirty, not all artists like it. However, the result should be very clean, contrasting. Also, there was an emotional component. I had grown up between tractors, wagons, heavy equipment, and engraving depends on a workshop with large machinery, presses. That encouraged me.

I owe what I am to Carlos Zaldivar, a graduate professor at San Alejandro who came to Ciego de Avila teaching at the Vocational School of Art, specifically in the art of engraving ; he was my main impeller. I think he saw a potential engraver in me and put much emphasis on my training. He made work at night and thanks to him I could get one of the 10 scholarships awarded that year for the National Art School (ENA by its Spanish acronym).

You graduated in 1991. By that time the country’s circumstances had changed and the future was uncertain, also for the arts. How was that of finishing the studies wanting to save the world and find material limitations that prevented it?

They were hard times and we did not know how much it could last. However, the art did not suffer the rigor from the first moments. I think to some extent the creation helped offset shortages in other fields of life. In 1991 an engraving workshop still existed in Ciego de Ávila, to which I came to spend my social service. Five years later the difficulties persisted and the government decided to close the workshop. Then I began to lose hope from the institutional point of view and I was forced to seek resources on my own, because I was always clear that my vocation was being an engraver. If today I am celebrating 30 years of artistic life I can say that 90 percent of this time I have devoted to engraving.

Did the inclusion in the academies of Plastic Arts, which at the time the territory had ─there is not even one today─ respond to a particular need of space to keep creating or a vocation for teaching and intend to ensure the relay in the specialty?

In the years in which I was trained at ENA I graduated more as a teacher than as an artist. We were professionals with the task of forming new generations. The course had a pedagogical profile. That has changed today. This solo exhibition, hindsight, is also a gratefulness to all the teachers I had during my studies. When in 2000 it was decided to create the Academies I felt myself more fulfilled. In the previous decade it had been impossible to exert like professor. I had given up hope of working in an academy because it was suspended the elementary level of Plastic Arts and I had to work as a specialist in the decoration of hotels, which compensated me to some extent, but otherwise it frustrated my vocation for teaching. So when the academies were opened I was the first to begin teaching. We graduated 10 generations of engravers, who are now out there. It was a decade devoted entirely to teaching and I have no regrets. On the contrary, I regret not being able to continue that work. I feel it’s something I’m missing.

You spoke of work as a decorator of environments in hotels in the keys north of Ciego de Avila. Do you think that this is a minor art?

Not at all . The trends of contemporary art have brought many misunderstandings in this regard, as I see it. The art can be divided, like humans, in body and soul. That is, in contemplative art and conceptual art. My concern has been to find a balance between both views. The works that were made at that time were a possibility to strengthen technique, it is true that there was a very strong conceptual base, but the contemplative character is enhanced. The fact that these pieces are located on no “artistic” spaces does not mean they are minor art.

Why Chamorro, at the height of his 30 years of creation, has not a workshop, in the manner of other creators of the country? Is it very difficult to get that space that, now that the academies no longer exist, can fill the void as to the formation of new artists?

Today I have a project: Estamparte, pursuing that goal. The request for a space where sitting it, is already made; a space not for my personal benefit as an artist, but for the projection to the community, the society; a llowing channeling those graduates who are my responsibility, something enabling their improvement. Premises with other functions going from the material to the spiritual are prioritized today in the city. We are at a turning point in the country, and the concern of artists has to do with some institutions of culture to lose their value, their importance in society.

Chamorro says that what he likes the most of engraving is its massiveness but, ironically, it is also what he likes the less, because current conditions do not allow many copies of the same work and that undoubtedly is frustrating. He confesses that these have been 30 years of pure creation in different areas: artistic, family, and as leader in the field of culture. “I have really enjoyed each one. Maybe that’s why my work is not more prolific. ” I also guess it has its tempo, it is leisurely, unhurried, as this conversation. It is, perhaps, the sui generis intelligence of engravers looking at the world upside down to understand it better. “The result I hope is not fame. My priority remains to balance my creation between work and emotional life. “