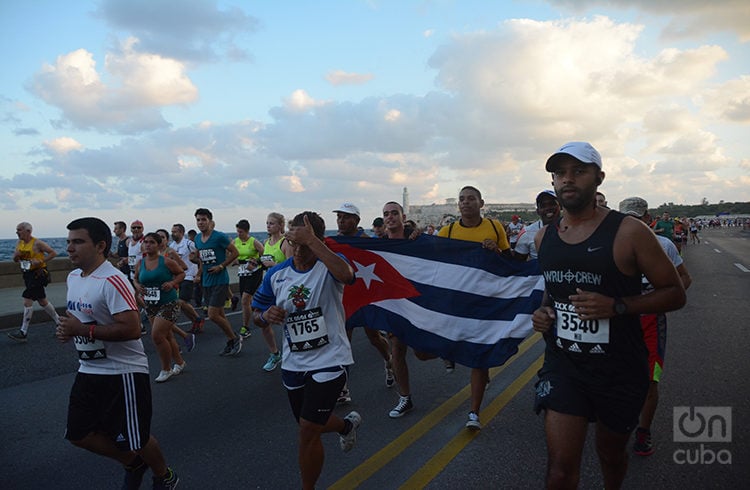 Running the Havana marathon means making stops in several of the most significant points of the city and its history, crossing the obstacles of its streets, getting wet with the salt water along the stretch of the seafront drive. It also means hearing people complain about the changes made to the urban transportation routes.

This Sunday Marabana celebrated its first 30 years. And thousands of people participated, among them 3,076 locals and 1,953 foreigners from 113 countries. They ran in the three distances convened for men and women: 10 kilometers, 21 km and 98 meters and 42 kilometers and 195 meters.

The United States headed the foreign delegations with 840 runners, followed by Germany (150), France (90), Spain (90), Mexico (90) and the United Kingdom (50). Dozens of Colombians, Australians, Peruvians, Italians also participated. The 30th edition of this event became the third with the biggest international turn out, only surpassed by the 1992 Central American and Caribbean Games and the 1991 Pan American Games in Havana.

“The constant registration of visitors is due to reasons like Cuba’s being a tourist attraction, the uninterrupted holding of this race and the strategic international alliances that make it possible to face the material setbacks. We are a people that millions want to get to know,” said Carlos Gattorno, director of the Marabana-Maracuba Project.

Isidora Ashen, from the Dominican Republic, also present for a women’s congress to be held in Varadero, Matanzas, commented that “We are very alike and that’s why I did not think twice in coming. I form part of the track and field executive board in my country and I am very impressed with the amount of people who attended. The number is higher than on previous years and that says a lot.”

Close to Isidora, in front of the Kid Chocolate Multipurpose Center, Angelita Payo, from Guatemala, was celebrating the event’s organization and the contestants’ quality. The clock was marking 9:50 am.

“I want to congratulate everyone who has to do with holding this competition. It is very colorful, the public is supportive, I was able to see several relevant figures of the Cuban sports movement. This is a fiesta and happiness reigns. I am very moved,” said the smiling Central American woman.

The celebration of Marabana’s three decades went down in history for its record-breaking participation. In 2015 the number of runners who took off front the starting line close to the National Capitol Building was 3,852, of which 1,589 were foreigners; now the human tide was higher and for the first time more than 5,000 persons attended (a total of 5,029).

For Juan Carlos Mesa, deputy director of the project, the key words are effort and sacrifice. “That is what is needed to continue improving and growing. It will be indispensable to increasingly improve the process of organization so that everyone who wants to come doesn’t think twice about it.”

Víctor López, president of the North American, Central American and Caribbean Track and Field Association, came out completely satisfied. The Puerto Rican commented that Marabana is at another level, comparable to the planet’s principal marathons.

“Thanks to the contest’s good health, starting 2017 we are going to insert the Havana mid-marathon in our regional circuit, and two competitors, a man and a woman, from each territory making up our group are going to compete here and we are going to award cash prizes. It will be a magnificent way to support the work being carried out on the island.”

Marabana 2016 also celebrated the 497th anniversary of the foundation of the township of San Cristóbal de La Habana and the Day of Physical Education and Sports. Moreover, the winners of the long-distance race in both sexes were invited by Air France to run in the Paris Marathon.

The lucky winners were the locals Henry Jean (2:34.29 hours) and Misleidys Vargas (3:06.28). Next April 9 they will both tour a city that, in addition, has sufficient attractions to enjoy each centimeter and get to know its monumental cultural legacy.

All sweaty, exhausted, and almost out of breath, Jean pointed out that his goals were to participate and win. “I did not start out in search of a good time; the idea was to win to be inserted in the international circuit. I’ve already recovered from a lesion I suffered, which kept me from participating in the sport for a long time. Now I have new goals, Paris is waiting for me.”

Francisco Rodney (32:35 minutes) and Yumisleidis Mestre (40:44) won the 10-kilometer run. On the other hand, the winners of the mid-distance marathon for women was Yudisleivis Castillo (1:17.58) and for the men the winner was the Veracruz 2014 Central American and Caribbean Games and Toronto 2015 Pan American Games champion, Havanan Richer Pérez Cobas (1:06.19), who highlighted the favorable weather for running.

“It’s an important success because it’s the sixth time in a row I’ve been able to participate. Never before has someone achieved this in this competition. The weather was excellent, just a bit of wind along the seafront drive, but that didn’t stop me. I’m going home satisfied.”

The Marabana Organizing Committee launched the call for next year, when on the third Sunday of November (day 15) the 31st edition of an event with a growing number of followers every year, in addition to enjoying great international prestige, will take place. The streets of Havana again were full of thousands of runners, all of them ready to get to the finish line and on the way discover the treasures of our city.