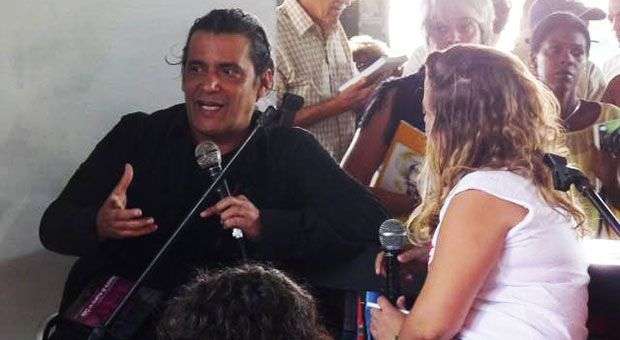 Made in digital format the book breaks the silence that has accompanied a subject marked by its many complexities. The existence of a significant number of Cuban men, whose employment or making a living rests in sex work; it is a phenomenon that institutional agendas and the media erroneously prefer to hide.

In the pages of this book La Rampa is more than the ideal spot for moviegoers, the Malecon doesn’t only host loving couples, fishers and drunkards; in the Fraternity Park people don’t only wait for buses or taxis, and few meters from the statue of José Martí, in Central Park, people do more than merely discuss baseball. González Pagés “discovered” after a thorough anthropological work, an edge that is part of the daily life of these spaces. It isn’t another Havana what he shows; it is simply Havana in full, with those dazzling things that are accompanied, at times, but others that are annoying to many.

In the testimonies of the protagonists converge male children who were sexually abused by fathers, uncles or close friends of the family, early school dropouts, teenagers who took the difficult path of migration to the capital, foreign customers with wallets full of Euros or retirees of the island that, in exchange for food and lodging for one night, earn the favors of young newcomers to the capital city; the occasional corrupt policeman for some CUCs will let them work their area; prostitutes whose main objective is to ensure the maintenance of their children and wives.

Pingueros in Havana, as the author well noted during the lecture presentation in the Cuba Pavilion, is not an investigation made for police files. Logically, in it the names of persons and addresses appear in anthropological key. Pingueros … doesn’t denounce, it reveals; it doesn’t take sides or disqualify, gives voice to a group of men who for more than a decade had on the sex market the stage of their lives.

Around the importance of socializing these testimonies Julio Cesar declared exclusively for OnCuba : “I think its greatest strength has to do with making visible many of the phenomena that occur around male prostitution , and often unknown because male and homophobic prejudices. There are criminal networks highly linked to “pingueros”, which is the popular name through which they are known in Cuba. We talk about people who murder, steal, deal drugs and use minors for business, and so far there is no way of preventing it because all the work is left to the police. I think that we must educate and many of the young people entering the market do so in very vulnerable situations , so we can not abandon them to their fate. “

On the reception of this book, the leader of the African American Network and Masculinity ( RIAM ) said: “The text has had a suspicious look from some sectors who do not want to talk about these issues. However, the general population and people who are more sensitive to the problems that plague our society have given it a welcome beyond my expectations. “

“The presentation at the Cuba Pavilion was attended by many, and my Facebook and my email are constantly getting messages from people interested in reading it, post it , share it . Like other people are afraid to talk for now, they see this book as an act of sacrilege, as if I was revealing a great patriotic secret. They assume that it helps create a bad image of Cuba, the eternal fear of giving ammunition to the enemy remains in them. At the end the reality is much more shocking, one need only to take a walk through the city, study those spaces and especially be committed to our society in a pragmatic way that goes beyond mere speeches. “

“Pingueros en la Habana ” is available for free in the navigation room of the Cuba Pavilion. You need to go with a flash memory to download it.

Photos: Courtesy of the interviewee

An attempt of a ballad, with the guitar on the wrong side

Love story and architectural treasures of El Vedado, keys for a novel

Love story and architectural treasures of El Vedado, keys for a novel

Pedro Juan Gutiérrez: “There is not such a thing as clean or dirty reality; there is just reality”