People’s reaction to COVID-19 depends on origin and respect for authority, but also on ideology

In an extremely polarized electoral year, the fight against the coronavirus has entered politics and has been conditioned by partisanship. Each one reacts like their political leaders. 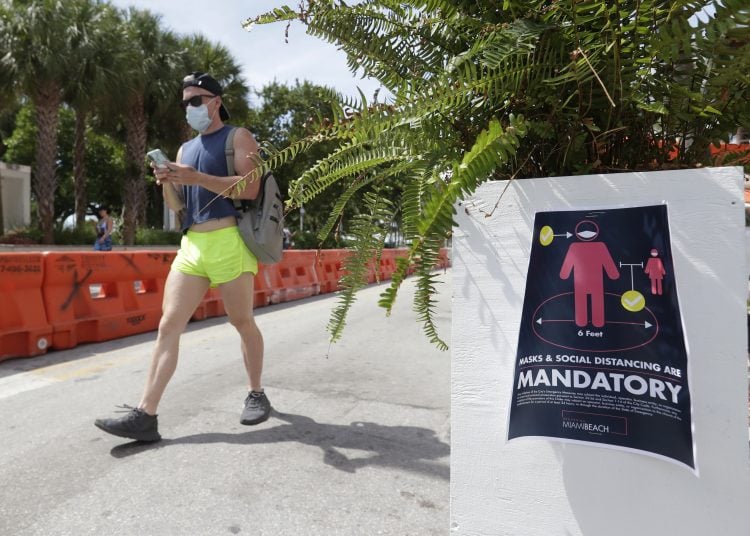 George is a Miami City police officer. In recent weeks, he has a new responsibility. In addition to his daily patrols in the eastern part of Little Havana―an area that has more and more Central American immigrants every day, where he deals with petty crimes, domestic disputes, young people roaming the street during school hours and fights in the markets―, he has now been ordered to fine people who go outside without a mask to protect themselves from COVID-19.

The mayor of Miami the mandatory use of the facemask two weeks ago, but the measure didn’t have great results because they were sold out in pharmacies. The authorities were not demanding enough when applying the fines, a first one of 50 dollars, followed by 150, 500 and jail time. In both the city and the county, there was no ordinance approved by commissioners and councilors, but only an order from the mayors.

As a consequence, the epicenter of the pandemic moved to South Florida and the contaminated and deaths increased. Not only because of that, but also because the political authorities in the area, pressured by Governor Ron DeSantis, decided to open the economy and services. The number of new infections was so high that all records were broken. Now there are 77,867 infected and 1,270 dead.

According to George and a group of colleagues, the basis of this problem is that most people don’t wear masks, despite the danger this represents. This, he says, has basically to do with three things. “People don’t respect authority, they don’t see themselves represented in the mayors and they don’t believe what they are told. It’s a question of getting information. And the press is more concerned with the consequences of the disease, with scandalous figures, than with explaining to the public the need to obey the authorities’ orders,” George said. “Theirs is the spectacular nature of the consequences of the epidemic, not the way to combat it. Attract readers and listeners, not educate people.”

The mayor has ordered the police to form persuasion and outreach groups, but they didn’t have much impact either. Now the mayor has plans to reinforce these patrols but without great hope, because the public has very different convictions on how to react. For example, if they catch a person more than three times without a mask, they could end up in jail. And this often has to do with their ethnic origin.

Marcos González is a Nicaraguan sociologist from Texas with long experience in hospital and university issues. During the pandemic, he has closely followed people’s behavior towards a disease about which little is known. “The reaction to this tragedy is very different, and has to do with the education and personality of the people. On the one hand, politicians, who are supposed to be leaders, move in a country a little different from the others. A central, federal government is in some ways supplanted by state governments. Some states have more influence over their citizens, and therefore their instructions are taken more into account,” he said.

“We have to take into account,” he adds, “that in political terms the country is divided. Therefore, both politicians and citizens are divided according to their thinking and don’t necessarily believe in what an opposition politician tells them. Democrats follow their politicians, reject Republicans, and these do the same with the others. The matter is aggravated because many of the politicians, due to their ideology, don’t necessarily follow the advice of specialists or have no idea in what they are involved. Or they are not interested in the problem, as is the case with President Trump. New York Governor Andrew Cuomo is much more interested, dedicated, and available,” González pointed out.

This would be the behavioral scenario in South Florida. As George explains, people react based on their political beliefs. “Almost always when they call me to take someone out of a supermarket because they entered without a mask, that person starts insulting me and verbally assaulting me in political terms. My colleagues and I try not to respond that way, but to remember the regulations, but they continue with the political insult. That I’m a Democrat, that I’m leading the country to socialism―can you imagine me, a police officer, leading the country to socialism?―, and sometimes there are physical attacks,” he said.

It is at this time that the matter becomes complicated because George and his colleagues arrest the aggressor immediately. The individual can resist more violently and can get hurt and end up in court. And since assault on a police officer is punishable, the law is clear: 5 to 10 years in prison.

According to González, the other aspect is the personality of the people due to their origin. “Hispanics and African-Americans are more likely to ignore the authorities. It is a way to reaffirm their independence in response to the way they have been treated no just for decades, but for centuries. Hispanics accept authority, but with a tendency to weariness due to the interruption of economic activity, since their salaries are low. They need to work. They are more sociable, familiar. They don’t like to stay home. I’m also going to believe that they don’t have much confidence in the explanations and directions of the authorities,” he affirms.

African-Americans are something else, he says. “They don’t trust the police at all and they reject it from the outset. What has happened in the United States this year is a very clear example,” he underlined, referring to the murders of African-Americans by the police and the avalanche of demonstrations that shook the country.

Then there are the young people. “That is a problem for the school and for the parents. But since schools are closed, teachers can do little. My curiosity is if the schools are going to open as of August, some states like Florida are very reluctant, despite the fact that the White House wants to sanction them if they don’t, and if they do open, the teachers are going to educate the students about the dangers of and precaution measures against the coronavirus,” he concluded.

No new cases of COVID-19 in Cuba, Dr. Durán takes off his mask