The Vatican has reported seven cases of COVID-19 among its residents or employees. 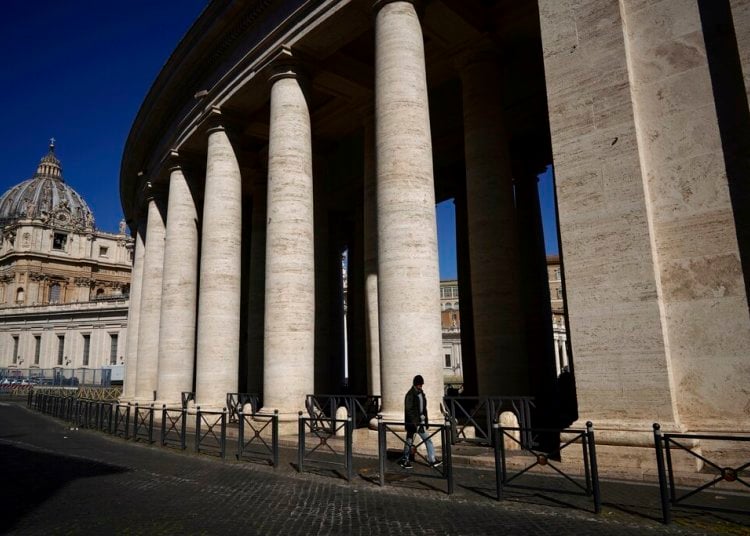 A man walks past Bernini’s colonnade in St. Peter's Square during Pope Francis’ weekly appearance that the Vatican is broadcasting online due to restrictions against the new coronavirus. Photo: AP / Andrew Medichini.

Pope Francis celebrated the Palm Sunday mass without an audience, after the traditional ceremony in St. Peter’s Square was suspended due to the coronavirus pandemic.

Normally tens of thousands of Romans, tourists and pilgrims with palm and olive branches would have filled the open-air mass led by the Pontiff. Instead, Francis conducted the ceremony at St. Peter’s Basilica, which seemed even larger because it was almost empty.

In addition to his assistants, a few prelates, nuns, and lay guests were present, sitting on the first benches and separated to reduce the risk of contagion.

Reflectively, Francis blessed the palms extended by his assistants and then took one.

Palm Sunday is the solemn start of Christian Holy Week that culminates in Easter, which this year is April 12. The Vatican has announced that Francis will officiate all traditional ceremonies without an audience, complying with quarantine measures in Italy and the Vatican to contain the spread of COVID-19, the disease caused by the virus.

One of the usual elements is the Stations of the Cross procession on Good Friday. This year, instead of the traditional procession in the Colosseum in Rome, the Pope will lead the procession in St. Peter’s Square.

The Vatican has reported seven cases of COVID-19 among residents or employees of the small independent state.