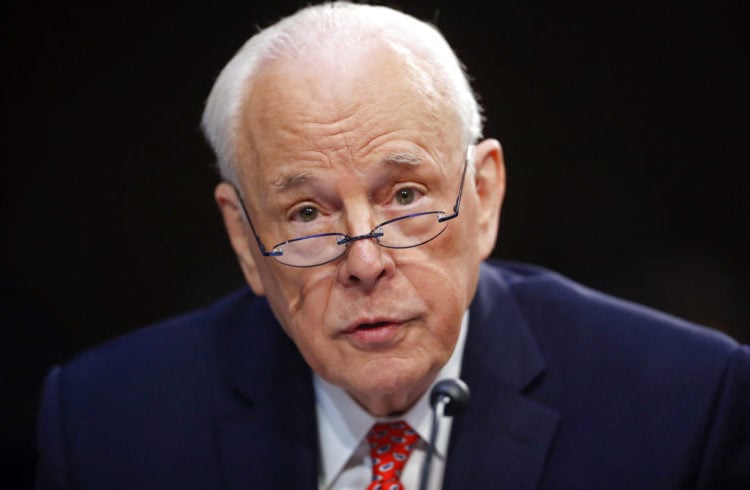 John Dean, who was White House Counsel to President Richard Nixon, during the Senate Committee on the Judiciary hearing. For months now, the presidency’s scandals are bringing echoes of Watergate, the scandal that brought down Nixon’s presidency. Photo: Pablo Martinez Monsivais / AP.

The White House is boiling with conspiracies and treasons while the collaborators are seeking the anonymous leaker. The president feels besieged by his executioners – Bob Woodward especially drives him crazy -, is increasing his own version of a black list of enemies and murmurs out loud if he must fire his secretary of justice, the special attorney general or both.

Since a few months back the government of Donald Trump and his scandals are bringing back a waft of Watergate that is an invitation to compare the characters and crimes of that period of Richard Nixon, but this week the story was not limited to a repetition: it came out of the trash can again in the form of meat.

There again was Nixon’s old counsel, John Dean, talking in Congress about a cancer in the presidency.

Almost every problem Trump has, has a parallel to Watergate.

Special Counsel Robert Muller is heading an independent investigation caused by an irruption in the Democrat National Committee, the same that opened the lid of the Watergate worms, although in this case the theft was digital and linked to the Kremlin, not to the White House.

President Richard Nixon ordered his secretary of justice and later the undersecretary to fire Watergate’s district attorney: both refused and resigned in what has gone down in history as the Saturday Night Massacre, but which did not delay for much time the investigation or Nixon’s fall. Trump fired the acting secretary of justice and FBI Director James Comey, which gave rise to Mueller’s investigation which has been going on for more than a year.

Some of the same journalists from then – Woodward and Carl Bernstein, who brought to light the theft in the Watergate – are the ones infuriating the present president.

“Democrat agent,” said Trump about Woodward. “Degenerate idiot,” he said about Bernstein, who collaborated with a note for CNN about the investigation on the Russian intervention that according to the president is “a big lie.”

They are trying to down me, Trump said to a collaborator according to Woodward’s new book called Fear. The book describes a tragicomedy in the White House in which the principal counsels describe the president as an “idiot.” During Nixon’s time, his right-hand man Henry Kissinger called his boss “meatball brain” behind his back.

The difference is that at that time Tweeter did not exist and the U.S. president did not air his personal thoughts even if he could.

Historian Timothy Naftali, a former director of the presidential library and the Richard Nixon museum, said Trump is a president that publicly says things that according to recordings Nixon said in private. And he added that it’s as if Trump were publicly debating with the history of Watergate, and that it is the president who is issuing an invitation to seek these parallels.

The list of names Trump considers enemies is evident in his Tweets. He includes former political adversaries, his own secretary of justice, his predecessor and former national security officials whom he threatens with taking away their access to confidential information.

This list now also includes an anonymous high-ranking official, author of an opinion column in the New York Times that describes the president as amoral. The author speaks of a firm state within the government that tries to contain Trump’s erratic impulses, a description that borders on that of deep state that according to the president resists his measures. On Friday Trump said that the Department of Justice should find the identity of the anonymous author.

During Nixon’s time, a White House memorandum dated August 16, 1971 asked how they could use the available federal machinery to pester their political enemies. They thought of criminal charges, trials and the denial of subsidies and contracts and the loyalists were asked to contribute names to the list.

Nixon’s list of enemies was drawn up by Dean, the fixer attorney who abandoned loyalty to Nixon and later helped to bring him down from the presidency. The Democrats asked him to appear in the Senate hearings about the Supreme Court as an expert on the executive power. He presented himself as a man richer in years and experience.

According to Dean, there is much to fear from a frenzied president who is prepared to breach his powers and that it is a fact he could testify to from personal experience.

As the president’s legal counsel Dean stipulated paying the thieves who entered the Democrats’ offices in the Watergate building in search of material that would help Nixon’s reelection in 1972. Dean participated in the covering up of Nixon’s guilt until he broke relations with him and declared before the Senate Watergate committee. His testimony was fulminating: he was sentenced to four months in prison for obstruction of justice and Nixon resigned when faced by the threat of removal from office through a political trial.

Dean’s parallel counterpart is Michael Cohen, the president’s former personal attorney, who paid women who say they had had sexual relations with Trump to silence them.

Cohen pleaded guilty of eight criminal charges and said in a federal court that he had violated the campaign financing laws as part of a cover up ordered by Trump, something the president denies.

Another possible parallel is Don McGahn, White House legal counsel who has cooperated with the investigations and has declared for hours. It still isn’t clear if the material handed over by McGahn is damaging to the president.

Trump is not charged with any crime and the series of statements by campaign collaborators provided by Mueller have not revealed there is collusion between Moscow and Trump’s campaign team. There are no conclusive evidences.

Until now, the parallelisms with Watergate are partial, says Naftali.

However, he said that Nixon’s handbook of dirty tricks, abuse of power and political espionage is a useful source of questions for any investigation of an impulsive, erratic and potentially criminal presidency, and he added that they will be paying attention because Nixon’s presidency taught them how to avoid U.S. presidents from doing what Nixon did.