What components have caused the crisis in which the United States finds itself today? 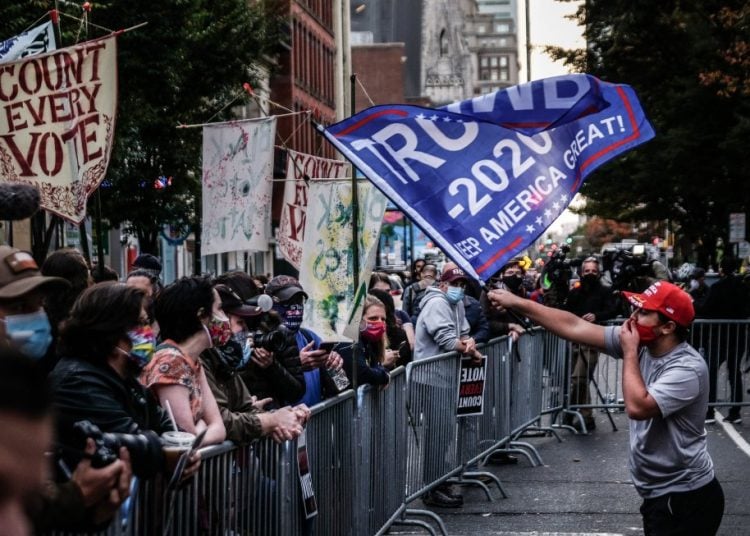 A supporter of President Trump waves a flag in front of a group of Joe Biden supporters outside an electoral counting center in Philadelphia. Photo: Mario Cruz/EFE

The political crisis in the United States of America is deepening in ways we are not used to. Neither the struggles for civil rights in the 1960s, nor for the female vote decades earlier, nor the Vietnam War, nor President Nixon’s impeachment, not the assassination of President Kennedy, the two world wars, McCarthyism or the Great Depression have placed the country at a crossroads like the current one.

The 2020 elections have exposed all the components and forces that are causing the crisis, which seems to worsen with each passing day without legally deciding who was the winner of the elections.

As I see it, Trump is the visible leader of the forces that in that country realized that the U.S.:

This group of forces is headed by capital, which has suffered from all of the above. But Trump is supported politically by a large part of the industrial working class and part of the so-called lower middle class in the United States, who were left unemployed or in lower-paying jobs.

This working class sees immigrants as enemies: they consider that “their jobs are being stolen,” to which is added the ideological agitation, which portrays them as murderers, criminals, etc.

The working class is made up of people of all colors, but it is mostly white, with antecedents anchored in the slave states. Groups of them see people of African descent and the freedoms they have conquered as part of their ills. They are organized in their localities, in groups of fanatics of the supremacist ideology, heavily armed.

Supporters of President Donald Trump protest outside the State Farm Arena as votes are being counted inside in Atlanta, Georgia. Photo: Magan Varner/AFP

Trump’s presidency has dismantled much of what Obama did; hence the consolidation of the unconditional support of the sector that led him to the presidency.

His proposals have included:

All this, in addition, with the aim of increasing the prison population, whose rate is the highest in the world. It becomes a source of cheap labor, a kind of secret slavery for the national industry and as a way to counteract and silence the emancipation struggles of these sectors.

The above results in:

For the first time in U.S. history, as far as I can see, the possibility has been created for a fascist government to seize power, be it through legal or bloody means. As many analysts have shown, Trump has a heavily armed political base, which could support him in that purpose. For them, it would imply being congruent with the goal of achieving “a great America” ​​again.

Trump’s “real power” gamble four years ago was truly risky, as life proved. He is a failed tycoon, a trained charismatic manipulator, who could have brought the American economy out of the morass it is in, for the benefit of the country’s businesses and capital, prioritizing national industry and investments and demonizing the main foreign competitors, China first. Obviously, it didn’t work. It seems that he is going to leave the situation worse than how he found it.

It is a mistake to resort to a capitalist when what has always worked is a member of what some euphemistically call “political class.” Read: a career politician, whose job, as a good employee of capital, is to manage the country in a way that works as well as possible to guarantee better benefits to it.

The forces of the left

Left-wing forces are missing in the US political picture I have presented. Many wonder if they exist, since they consider that McCarthyism “cleaned the house” of the entire left. For the right, they do exist, because they have to fight against them permanently.

Accusing Obama and Biden of being socialists and even communists doesn’t imply an objective lack of vision of that right, since it is necessary to differentiate between political rhetoric and political convictions. But they are aware that, within the Democratic Party (DP), a genuinely left movement has been developing, which has roots in the first half of the last century, but which continues being rounded in the present. It has had a kind of visible leader in Senator Bernie Sanders, an “independent” politician, but effectively within the DP, which is why he has twice competed for the presidential nomination.

We must study to what extent the DP has been able to capitalize on the rest of the left-wing social movements that have emerged in the country: some spontaneous, such as “Occupy Wall Street,” others historical, such as the movement for the rights of Afro-descendants , and immigrants, especially Latinos, who are exploited for their condition of pseudo or total illegality, poor command of the language or simply for being considered the cause of unemployment among whites.

The word socialism can no longer be taken as an anti-communist scarecrow to attract political followers, although it still works in many places. The current crisis has resulted in half of the American youth agreeing with the concept of socialism, although with various meanings, as is to be expected.

The DP took concrete steps to prevent Sanders’ from being nominated as a candidate for president, as they did with Wallace in 1944, as a possible vice president for Roosevelt. If that had been the case, one might wonder if humanity would have been spared the massacres in Hiroshima and Nagasaki. The “electoral” reason that is argued is to prevent his status as a leftist from inhibiting a large part of the electorate from voting for the DP. In reality, it is about not allowing someone who can be assumed to be on the left to run for president of the United States, with the possibility of being elected.

The evolution of politics around the world allows the left to advance towards true democracy, that of the people, that of the workers, without real control by capital. The U.S. has entered that trend and life will tell whether it is consistent or a “bump.”

I believe that there are objective conditions to consolidate a stronger position on the left’s agenda in that country. The need for the political establishment to use Trump is evidence of this.

The American left has a Herculean task: to understand and assume the sectors of the working class captured and manipulated by the most reactionary currents in that country, an evident reality in Trump’s electoral base. Adding them to the democratic struggle is possible, if the left transparently assumes its class interests, gets rid of the commitment to the most reactionary capital, in which it is involved today, and allies with the national capital most committed to the objective conditions of well-being of the American people.

The whole country has another task: to improve the Constitution and the laws that regulate politics, elections and the judicial system. This is more difficult than any other, as it implies changing the rules of the game of the political system, in favor of a more social democratic capitalism, to use a concept that many understand, and even more, the way of thinking of those who have the power to do it, as well as the majority of the people and their cultural and political elite.