The decision passed in 1973 limiting the ability of states to outlaw abortion has just been annulled. 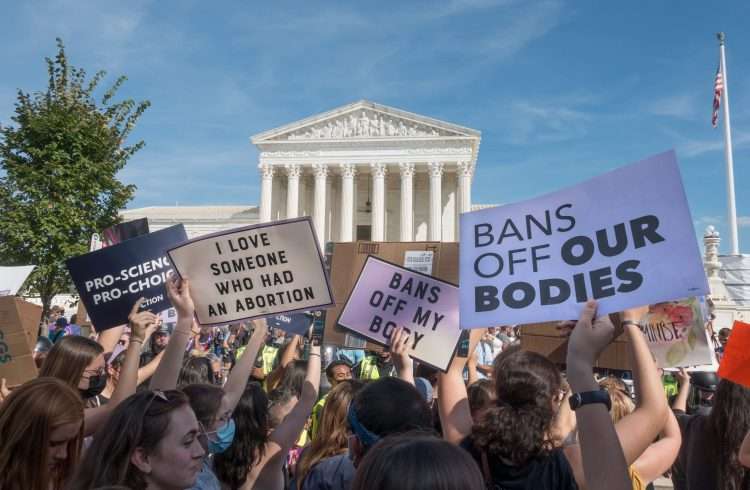 Right to abortion supporters march in front of the Supreme Court during the Women’s March on Washington on Oct. 2, 2021. (Bob Korn via Shutterstock)

In 1969 Norma McCorvey (1947-2017), then a young woman in her 20s, wanted to terminate an unwanted pregnancy. The girl had grown up in poor circumstances, given birth twice and given both children up for adoption. At the time of that pregnancy, abortion was only legal in Texas when the pregnancy put the woman’s life at risk. While American women with sufficient financial means could abort by traveling to other countries where the procedure was safe and legal, or by paying a large sum to a local doctor willing to perform an abortion behind the scenes, those options were, of course, out of reach for McCorvey and many other women of her social status.

Reliable projections affirm that in the 1950s and 1960s the number of illegal abortions in the United States reached a maximum of 1.2 million a year. After unsuccessfully trying to obtain an illegal abortion, McCorvey was referred to Texas attorneys Linda Coffee and Sarah Weddington, who were interested in challenging existing anti-abortion laws. In court documents, McCorvey was renamed “Jane Roe” for privacy reasons. In 1970, those attorneys presented a lawsuit on her behalf and on behalf of all women “who were or may become pregnant and want to consider all options.” The defendant was Henry Wade, the district attorney for Dallas County, where McCorvey/Roe resided.

In June 1970, a Texas district court ruled that the state’s abortion ban was illegal because it violated the constitutional right to privacy. Later, Judge Wade declared that he would continue to prosecute physicians who performed abortions, until the case was finally accepted by the Supreme Court (during this process, McCorvey gave birth and decided to put the child up for adoption).

On January 22, 1973, the Supreme Court, in a 7-2 decision, struck down the Texas law that prohibited abortion, thereby legalizing the procedure throughout the country.

The court ruled that a woman’s right to an abortion was implicit in the right to privacy protected by the 14th Amendment to the Constitution.

Today that turning point has been destroyed with the six against three vote, with which the Supreme Court has just annulled the precedent established by Roe v. Wade, which in 1973 gave constitutional status to the freedom of women to terminate pregnancy.

Three factors have determined the current conservative majority in the United States Supreme Court (6-3), with profound political, social and cultural implications in the long term.

President Trump began his term in January 2017 with a vacancy on the Supreme Court due to the death of Justice Antonin Scalia in February 2016. At that time, three of the Court’s justices (Ruth Bader Ginsburg [1933], Anthony Kennedy [1936] and Stephen Breyer [1938]) were 78 or older and in the mood for possible retirement or death during the four years of Trump’s term. He immediately nominated Judge Neil Gorsuch to succeed Scalia. The new judge was confirmed by the Senate in April 2017.

Later, in June 2018, centrist Justice Anthony Kennedy announced his retirement, creating a second Supreme Court vacancy. The following month, Trump nominated Brett Kavanaugh as his replacement, ratified by the Senate after a very heated process over allegations of sexual harassment during his youth.

Lastly, following the death of uber-liberal Justice Ruth Bader Ginsburg on September 18, 2020, Trump nominated Amy Coney Barrett as her replacement. A month later, on October 26, 2020, she was confirmed by a vote of 52 to 48.

These three confirmations were made possible by a rule change made by Senate Democrats in 2013, which applied the so-called “nuclear option” to presidential candidates and allowed nominations to proceed by simple majority vote.

But it’s worth digging into the process a bit after Scalia’s death, the second time in 60 years that a Supreme Court justice had died in office. This led to a vacancy during the last year of Barack Obama’s presidency. Mitch McConnell, then the Republican majority leader in the Senate, declared that the new president, whatever his party affiliation, should be the one to nominate Scalia’s replacement. Meanwhile, President Obama declared that he planned to nominate his candidate to replace him. On February 23, the 11 Republican members of the Senate Judiciary Committee signed a letter to McConnell stating their intent to deny consent to any candidate proposed by Obama and noting that no hearings would be held until after January 20, 2017, once the new president had taken office.

Ginsburg and Breyer were part of the liberal wing of the Court; Kennedy was a centrist/moderate. Republicans were then presented with a golden opportunity during Trump’s term to be able to alter the balance of power on the Supreme Court and significantly reshape the Court towards a solidly conservative perspective.

That was exactly what happened. Following Ginsburg’s death and the confirmation of Amy Coney Barrett, the Supreme Court moved toward conservatism. The issue of abortion was central to the Trump election.

Last May Politico leaked a compromising document: earlier this year the majority of the Supreme Court had supported annulling Roe v. Wade.

The leaked text states that there is no constitutional right to abortion services. Consequently, states would be allowed to more strictly regulate or ban the procedure altogether.

The draft is signed by Justice Samuel Alito, a member of the Court’s conservative majority and appointed by President George W. Bush in 2005. A source familiar with internal deliberations said four of the Republican-appointed justices (Clarence Thomas, Neil Gorsuch, Brett Kavanaugh and Amy Coney Barrett) had voted with Alito at the judges’ conference after hearing oral arguments.

The release of Alito’s draft majority opinion, a rare violation of Supreme Court secrecy and tradition surrounding its deliberations, came as all sides in the abortion debate were preparing for the ruling.

Here’s what the draft says: “Roe was egregiously wrong from the start. Its reasoning was exceptionally weak, and the decision has had damaging consequences. And far from bringing about a national settlement of the abortion issue, Roe and Casey have enflamed debate and deepened division.”

“We hold that Roe and Casey should be overturned,” he added, referring to the 1992 case of Planned Parenthood v. Casey, that affirmed Roe’s finding of a constitutional right to abortion services, but allowed states to place some restrictions on the practice.

And he concluded: “It is time to heed the Constitution and return the issue of abortion to the people’s elected representatives.”

Some observers predicted that the conservative majority would scrap the right to abortion without outright overturning nearly a half-century of precedent. But the draft already indicated that the court was seeking to reject the entire logic and legal protections of Roe v. Wade.

One thing was clear: eliminate Roe v. Wade meant ruling in Mississippi’s favor in the case over that state’s decision, thereby attempting to ban most abortions after fifteen weeks of pregnancy.

The repercussions on the conservative side did not take long in coming: “We are entering a new reality,” Craig DeRoche, president and CEO of the Family Policy Alliance, a Colorado Springs conservative Christian lobby group, said in a statement. “This is the moment the pro-life movement has been waiting for. For the first time in nearly fifty years, states will have the opportunity to fully protect their youngest citizens.” On Facebook, the Rev. Franklin Graham, son of televangelist Billy Graham, wrote: “Praise be the Lord…! I don’t know if this report is true, but if it is, it is an answer to many years of prayers.”

“If this report is true, this is nothing short of a great victory for life and will save the lives of millions of innocent babies,” Sen. Ted Cruz, R-Texas, said in a press release. “But as I continue to await the final opinion of the Supreme Court, I am dismayed by the shocking breach of trust raised by this leak.”

The conservative strategy, very well thought out and articulated, consisted of giving a push “from below” to incite/encourage federal lawsuits on abortion and, thereby, increase the chances that the Supreme Court, with its new conservative majority, which has just to rule the annulment of Roe v. Wade.

That is exactly what they mean by the expression: “It is time to heed the Constitution and return the issue of abortion to the people’s elected representatives.”

Let’s see. According to estimates by reproductive rights advocates, state legislatures have passed about 400 anti-abortion bills since 2010, some so unconstitutional that federal judges have had no choice but to strike them down.

“Trigger laws” are not new: they date back to the year Roe v. Wade was decided, and historically several conservative states have introduced them in their legislatures. But from now on they have solidly failed. Now, not necessarily.

Without time or space for an exhaustive inventory, among the states that have enacted “trigger laws” it would be worth mentioning the following:

Liberal states have also been preparing for a post Roe v. Wade world by going the other way: by passing laws that would maintain or expand access to abortion. In January 2019, for example, New York lawmakers passed the “Reproductive Health Act,” which protects access to abortions after 24 weeks if the fetus is not viable or if there is a risk to the mother’s health. Similar laws have been introduced and gained traction in states like New Mexico, Virginia, and Vermont.

In the long run, it is inconceivable that red states continue to obstruct access to abortion. And it is particularly cumbersome that they do so by resorting to screen reasoning about the health and safety of women, who ultimately are called upon to make decisions about their own bodies. Similarly, that they try to interfere with a woman’s decision to raise a child with a disability or to subject him to live with a serious condition, or simply to give birth, breastfeed and all that goes with having a child. It is an expression of neo-totalitarianism. And promoted no less than by the party that advocates the idea of ​​a “minimal government” in the lives of citizens.

But there is a problem of public opinion. Polls have been showing that most voters oppose repealing Roe v. Wade. One from The Wall Street Journal found that 55% of respondents said they wanted abortion to be legal in all or most cases, while 30% said it should be illegal except in cases of rape or incest or when the mother’s life was in danger. Only 11% said it should be illegal in all circumstances.

A second poll, from Gallup, shows that 52% of Americans think that abortion is morally acceptable, while 38% find it morally wrong.

More recently, after the leak, a USA Today-Suffolk University poll found that 61% of voters oppose overturning Roe v. Wade, 28% supported overruling it and 11% were undecided.

Roe v. Wade substantially reformed American national politics by dividing two camps: pro-life and pro-choice. And that is precisely what burns amid this division in which the Union is submerged, as that snake illustrated in its founding days.

The guillotine just fell. The draft became a reality with today’s ruling. But the Supreme Court is still in the crosshairs, perhaps like never before.