Chinese in Cuba myths and realities 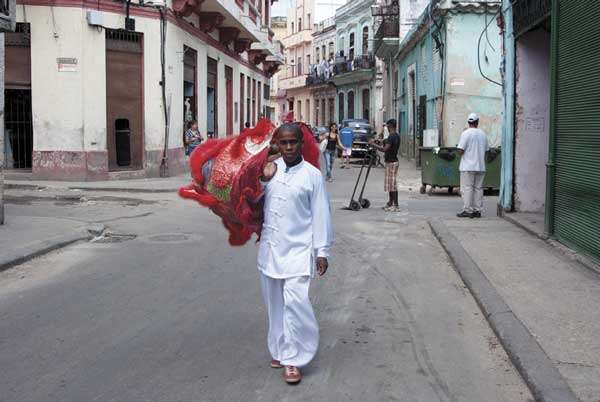 It all started in the twelfth moon, when Emperor Tu Kong was 47 years old — that is, on January 2, 1847, when more than 300 Chinese peasants who had been hired as farm laborers boarded the Oquendo frigate in the port of Amoy in China. They were dressed in loose, very baggy pants and shirts and conical bamboo hats, the ideal outfit for a good farmer. Their minds were filled with bright dreams, and as the ship sailed away from their homeland, they imagined themselves returning after eight years, when their contracts were completed, covered in glory and loaded with money to relieve the abject poverty of their families. The destination of those “coolies” was a warm Spanish colony in the Caribbean Sea, a chimera where coins poured into the pockets of those who were willing to work. And they wanted to work.

One hundred and forty-two days later, on June 3rd of that same year, the 206 survivors of the lengthy voyage entered the port of Havana. Their eyes were sleepy and faded from the salt residue of two oceans but still full of jubilation as they looked at the narrow mouth of the bay, its magnificent stone fortresses and the intensely green trees of that city of dreams and eternal sun. That was the very first day of the long chronicle of the Chinese presence in Cuba, a story in which myths and realities melt together.

Over a century and a half of coexistence, Chinese immigrants left their imprint on this Caribbean island. Their work, suffering, sacrifice and blood are part of the history and the complicated spirituality of the Cuban people.

Those first Chinese immigrants and the tens of thousands of others who followed them over the course of the 19th century had arrived in Cuba for the purpose of beginning to replace the hard labor of black slaves in the sugarcane fields that generated the country’s greatest wealth. The abolition of the African slave trade made it necessary to find another source of labor and Chinese poverty provided an alternative.

As was to be expected, few of those Chinese were able to fulfill the dream of returning to their far-off country with money. After completing the eight-year contracts that had brought them to Cuba, most were still as poor as they were when they arrived and their only option was to remain on the island. Many of them became agricultural workers, but others decided to settle in cities, especially in Havana.

It was in the year 1858, at the corner of Zanja and Rayo streets in Havana, that Chung Leng, a Chinese man who took the name of Luis Pérez, opened a small Chinese food establishment. His example was soon followed by Lan Si Ye, also known as Abraham Scull, who set up a stand of fritters, cracklings and fruits, also on Zanja. Soon afterward, the third Chinese business owner registered in Cuban history, Chin Pan (Pedro Pla Tan), opened a grocery on Monte street.

Modestly but persistently, in the area of Zanja, Dragones, San Nicolás and Rayo streets, Chinese people began settling in and working as launderers or street vendors, selling vegetables, fruits, meat, clothing, hardware and trinkets, crockery….  And that was when Havana’s Chinatown was born.

Although the working conditions were different, Chinese immigrants continued arriving in Cuba in search of a better life from the late 19th to the mid-20th century. They were mostly economic immigrants, almost all men, and in the immense majority of cases, condemned to live in poverty and marginalization.

One of the alternatives Chinese found for easing their stay in Cuba — and for their very survival, both economically and culturally — was the creation of associations that spread all over the country, although most were concentrated in Havana’s increasingly densely-populated Chinatown. These associations were patronymic (Chinese with the same surname), regional (immigrants from the same province), trade-based, for mutual aid and even political. Immigrants used them to try to safeguard their identity and find companionship and protection. These were the same societies that eventually founded a senior citizens’ home, a newspaper and a cemetery, all of which still exist today.

Because Chinese migration to Cuba ended with the revolution in China, and subsequently, many Chinese business owners decided to leave Cuba after the 1959 Cuban revolution, the Chinese population began to dwindle in the 1960s. Very soon, Havana’s Chinatown and other, smaller Chinese communities in other provinces became visibly deteriorated.

By the 1990s, practically no first-generation Chinese immigrants were left in Cuba, and today, only some of their descendants are visible, those who try to preserve their associations and some of their ancestral customs, battered by time and transculturation.

Much has been said about the Chinese influence in Cuba, when actually, more should be said about heritage. Aside from certain gastronomical contributions (some of which are from the Chinese community in California) and the occasional architectural detail, the real Chinese legacy in Cuba is a genetic one; that is, it is seen in the ethnic features of their descendants, almost always mixed with (black or white) Cuban blood. The fact that most Chinese who came to Cuba were men contributed to them forming families with native-born Cubans, and because these men were the economic mainstay of their households, the upbringing of the mixed-race Chinese was left to their Cuban mothers, whose culture, language and customs were adopted by their children, who did not even learn their fathers’ language.

For these reasons, very little was contributed to Cuban culture by the Chinese. Some of their traditions, which are practiced today in the surroundings of the tourist enclave that used to be the old Chinatown, are actually folkloric representations (such as the colorful lion dance) which have never been integrated into the body of Cuban culture, although they have coexisted with it.

The Chinese legacy, however, seems to be indelible in Cuba’s blood and history, to which they contributed their physical features, labor, presence and even their blood, when in the 19th century, some of those Chinese peasants who had recently arrived as laborers joined the Liberation Army that was fighting against the Spanish colonial power, doing justice to the declaration, “there was not one Chinese-Cuban traitor, there was not one Chinese-Cuban deserter.” Therefore, while their influence is not visible like that of various African cultures, Chinese immigrants also are part of the many-sided, intermixed spirituality of Cuba.

The Creature from the San Miguel Lagoon