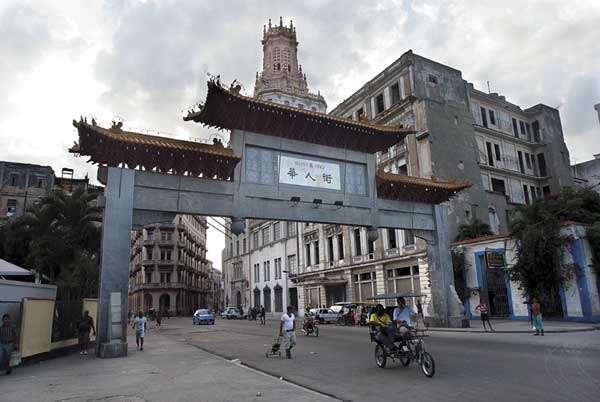 A modest eating establishment, located at the corner of Zanja and Rayo streets, and a stand for selling fruit and fried foods were the beginnings, in 1858, of Havana’s Barrio Chino (Chinatown). The district grew at an amazing rate, and 100 years later, our “yellow city,” as writer Alejo Carpentier referred to it, was the largest Chinese colony in Latin America. Its history is full of highs and lows. Today, with the original Chinese immigrants replaced to a great extent by their Cuban-born descendants with the same physical traits, this piece of the Cuban capital continues to boast an exotic attraction. Walking through its streets, poking around in its corners and visiting its souvenir shops are all part of a splendid cultural possibility that is complemented with a broad range of food and drink, where the exquisite and traditional art of Chinese cooking makes way for Cuban and international dishes. There is plenty to choose from.

A LONG JOURNEY WITH NO RETURN

The first Chinese arrived in Cuba on June 3, 1847 aboard the frigate the Oquendo. The so-called “coolies” had been hired as contract workers to labor on the island’s sugar-cane plantations, and they all planned to return to China covered in glory, with pockets full of money. However, what awaited them here was slavery under the aegis of a deceptive contract that forced them to toil for eight years for monthly wages of four pesos. By 1874, some 124,873 Chinese workers had come to Cuba. However, that figure is surely higher, because illegal trafficking also existed.

It was not until 1877 that a treaty between China and Spain banned the contracting system. However, beginning in 1855, when the first eight-year contracts were up, some “coolies” were able to free themselves from their contracts; however, none of them had the means to return to China. It was the same case with those who gradually became free after that date. For all of them, who were now free workers, there were very few sources of employment: construction, commerce and agriculture, in which some worked on small plots that were close to Havana at the time. They looked for places to live close to the Zanja Real (the city’s first acqueduct) and the surroundings of the city’s main market, where they sold their products.

Beginning in 1860 and until about 1875 — in parallel with the “coolies” — another wave of Chinese immigrants arrived in Havana. They numbered about 5,000 and they came from the state of California in the United States of their own free will, attracted by facilities for investing capital. They were the so-called Californian Chinese. Most of them set up their businesses close to corner of Zanja and Rayo streets, where other merchants had already become established. There, in 1874, the first large Chinese restaurant in Cuba opened, serving Chinese dishes that had been invented in the Californian city of San Francisco, adapted to Western tastes and, of course, the Cuban palate. Because the customers of these restaurants were usually not Chinese; they were Cubans who worked in the local tobacco warehouses.

After the arrival of the “Californianos,” Cuba had rich Chinese and poor Chinese. The poor were the former “coolies,” who continued to work in agriculture and to operate small businesses. The others established large companies for importing Asian goods, invested in the sugar industry — some bought sugar mills in the central region and in Matanzas — and introduced Chinese theater, a game of chance known as “La Charada” and prostitution, involving young women from China and the United States. They also introduced drugs. They married beautiful young women that they brought from their native country, as well as wealthy young Cubans. The Chinese who were poor came to the island alone, and tended to marry or live with Cuban women, especially those who were black and mixed-race.

A GATEWAY, A GREAT GATEWAY

Soon, Chinese-run businesses spread all over Havana and the rest of the island. Their groceries, laundries and eating establishments became celebrated, meeting the expectations of lower-income groups, as was the case with their fruit and fried-food stands — which sold the popular bollitos de frijol carita — ice cream and codfish sandwiches. It was dried codfish, with bones and skin, that came from Norway in wooden boxes. The Chinese soup from the Mercado Unico deserves its own special mention.

Chinese-Cubans tried to keep their traditions. They taught their language. A so-called Chinese cemetery is located in the Nuevo Vedado neighborhood. They celebrate the day of the faithful departed on the first Sunday of April. On that day, according to the Buddhist ritual, they bring incense and flowers to the graves of their loved ones, and also food, especially chicken and pork, always roasted. They do not leave the food there. When they decide to leave, they pick it all up, among bowed heads, and take it to the association to which they belong, where they eat it. One of these associations, the Casino Chung Wah, is trying to recover and preserve traditional Chinese culture, including dance, music and the culinary arts. It is interesting to note that in traditional Chinese festivities, there is no dancing. They are more like family or friendly get-togethers, for which they prepare popular dishes, which continue to feature the traditional Taoist yin and yang combination; that is, the two principles or inspirations that, through conflict or harmony, brought the universe and human beings into existence.

On the corner of Dragones and Amistad streets, a gateway about 62 feet wide stands, beautifully decorated, with an architectural style that goes back to the Ming and Ching dynasties, marking one of the entrances to Havana’s Barrio Chino. A memorable and enriching visit. With an exotic attraction.

Chinese in Cuba myths and realities

The Creature from the San Miguel Lagoon

The Latino, a stadium where baseball is life