Cuba’s decathletes: among the elite of this 10-event sport 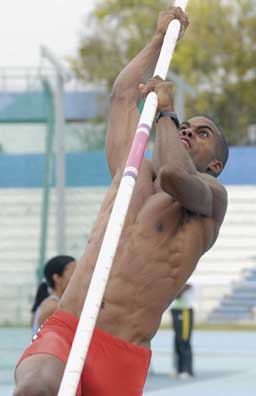 When Yordani García (San Luis, Pinar del Río, 21/11/1988) became runner-up champion of the 14th Pan-American Games in Rio de Janeiro, 2007, with a score of 8,113, nobody foresaw that Cuba’s decathletes would join the international elite of that sport. It was in Osaka, where that year’s decathlon world championships were held, that the future was foretold: Yordani himself, just 18 years old, finished in eighth place, with an acceptable score of 8,257.

That was the start of a five-year race, with Cuba’s decathletes in the lead, especially Leonel Suárez (Santiago de Cuba, 1/9/1987), who, with two world titles and two Olympic titles, shot ahead after that unexpected awakening. The high point came during the 2009 world championships in Berlin, where, like the three Musketeers, Leonel, Yordani and Yunior Díaz of Havana finished among the top 10, with respective scores of 8,640 (a silver medal for Leonel), 8,387 (eighth), and 8,357 (ninth).

To illustrate the ability of our decathletes and to address a question that many have surely asked, suffice it to say that to compete in this event, an athlete needs eight different pairs of sneakers: for the shot put, discus throw, javelin throw, high jump, long jump, pole vault, the 1,500 meters,100 meters,  110 meters and 400 races, along with all of the equipment needed for the different throwing events and the pole vault, making this event the costliest in track and field (the estimated cost for a decathlete to compete is close to 5,000 euros).

According to Gabino Arzola, head Cuban coach for the decathlon event, there are many reasons for Cuba’s success in the sport.

“Since the 2006-2007 season, when I began coaching this event, the top priority was to establish our own training system, incorporating the best from the Europeans, especially the Russians — with whom we had trained for a long time — and the Americans. This coincided with the rise of a group of excellent, talented athletes. Another important element was a change in concept related to the level of each event and the potential of these young people: we began working more in-depth on their best events, and at the same time, raising the bar on their worst. That way, they would make up for their shortcomings in the latter with their ‘high quality’ in the former. And this has apparently worked like a charm.”

LEONEL IN THE LEAD

It is no secret that Leonel Suárez, who holds a personal best of 8,654 points, is responsible for most of Cuba’s victories in the decathlon. He won a bronze medal in the 2008 Olympics in Beijing (8,527 points); a silver in the Berlin world championships; a bronze in the Daegu world championships (8,501) and a bronze in the London Olympics (8,527). Actually, 2012 has been a year of setbacks and uncertainty for him — a double-edged sword of sorts.

First he had problems with decreased blood pressure, delaying the start of his training by almost two months. As a result, he was forced to change his strategy and to work harder on his jumps and throws. Because of his physical condition, he should have worked on his running, but that could have affected his blood pressure. Then in Ratingen, Germany, he strained his right medial hamstring, and in the end, he was only able to complete one and a half official decathlons before the London Olympics began. However, Suárez recovered from all of that by resorting to his exceptional qualities: his enormous capacity for response, tremendous determination and extreme competitiveness.

Now it’s time to wait and see. Moscow is the next big goal, and we are confident that Leonel, Gabino and the rest of the troop will continue successfully using their formula to stay among the elite of this spectacular sport.