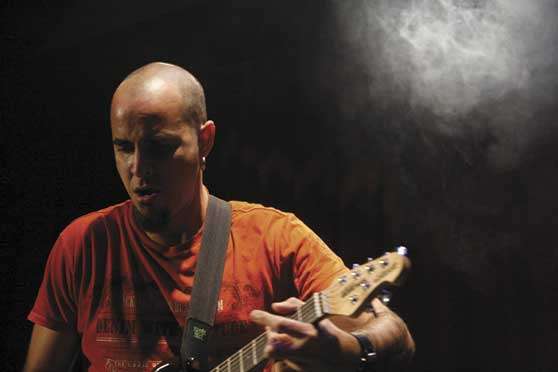 In a hypothetical Cuban cultural calendar, the month of May brings the Cubadisco International Fair, the most important music recording event in our country. This year, this national music production event is dedicated to the guitar, and its slogan is “The island of a thousand strings.” The expression comes from a composition by the maestro Leo Brouwer, a musician celebrated by critics worldwide as one of the greatest classical guitarists and composers of the late 20th century.

It is true that when we think about the history of guitar music in Cuba, we tend to associate it with classical music or expressions of our popular music, such as trova; however, it is also true that other facets have been developed, although they may not enjoy as much public recognition. From time to time, this writer has said that we have not achieved the kind of mastery of the electric guitar — not by a long shot —  as seen in classical guitar and popular music performances. Fortunately, in recent years a number of albums have been released both inside and outside of Cuba by guitarist compatriots, those living on the island and those who are part of the diaspora, which indicates that something is happening in the Cuban electric guitar scene that is worth following.

Compilations and anthologies predominate among these albums that have appeared in recent years focusing on the electric guitar. In that sense, it is worth noting that since the 1990s, the recording scene for young artists in Cuba has been rife with anthologies and compilations. In all sincerity, I should say that I am not an advocate of this type of album, because any anthology implicitly brings with it the seeds of discord, given the subjectivity that is always involved in selecting what is and is not included.

Nonetheless, every rule has its exception, and sometimes the promotional strategy of compilations has helped the public become familiar with the work of the musicians included. That is the case of Cuba Guitars Vol I, an album that is now out on the market and is of tremendous historic importance for the evolution of Cuban-made rock and metal music.

It is true that this compilation, in the form of a small, but attractive sampling of the accomplishments of fourteen Cuban guitarists, is made up of musicians who are — for the most part — unknown internationally, and in some cases, unknown or barely known in Cuba itself. However, they possess sufficient merits to be part of Cuba Guitars Vol 1 or to undertake their own separate albums.

Of course, there are those of us who will listen to this CD — produced thanks to the website Cuba-Metal, via its record label Cuba Metal Promotions, and the personal efforts of the site’s webmaster, Juan Raúl Fernández — and feel the absence of a number of figures from the current scene of Cuban rock and metal guitarists. Certainly, as one very popular refrain goes, “Not everybody who is somebody is there, but everybody there is somebody”.

Many reasons could be listed for arguing why this or that musician should or should not be included on such an album, but the most important thing is that this is the first attempt to try to provide a musical sampling of what is happening with  different generations of Cuban rock and metal guitarists. As a bonus, the selection includes both musicians resident on the island and others who have settled across the seas, which is one indication of the transnational character of the development of Cuban culture today.

If you were to ask me to describe the principal merit of this CD, I would say unhesitatingly that it testifies to the musical wealth represented by different generations of Cuban guitarists who have performed many different styles of rock and metal music, and who are open as instrumentalists to the best musical influences of their time.

Cuba Guitars Vol I is a compilation that, like anything created by humans, has its virtues and defects, and it qualifies for the select group of few albums that are meant to withstand the passing of time and to continue gaining a cult following in the years to come.