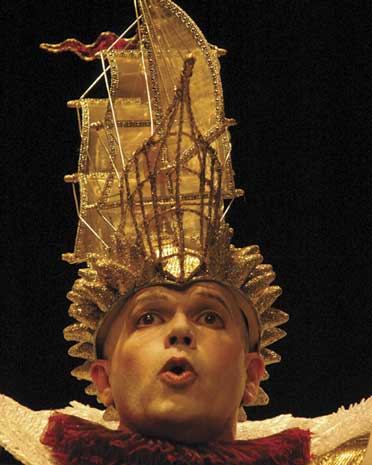 Osvaldo Doimeadiós studied acting at Cuba’s national university of the arts and as a student founded the comedy group Sala-Manca, with which he began working after graduating in 1987. Since then, he has built a versatile career in theater and television as one of the best-known actors on the island. People refer to him by his comedic characters, such as Margot, Feliciano and Pipo Pérez, and are familiar with the poignant monologues he has performed onstage in the last decade as part of the Teatro El Público theater company, directed by Carlos Díaz.

We have often seen him, with his sage inventiveness, mold his characters until they take on a life of their own — some of them are more than twenty years old, and are still as vibrant as when they were created. I still remember his production Aquí [email protected] roba, a retrospective compilation of scenes from his career. He took it to Miami in 2010, where it was a success, and he was invited subsequently to host the television program Esta noche Tu Night. It was the first time that a Cuban actor had done that type of work in the United States: “I thought it was a crazy idea when they proposed it, because it was an unknown context for me. I was worried at first, but I accepted the challenge. I think it was a great experience in every aspect”.

“My visit there was further confirmation of the idea I’ve always had about Cubans. I think our need to give ourselves to others is what identifies us. From the most ordinary to the most prominent people that I came across in that city, everyone was tremendously affectionate with me. It was like I hadn’t gone anywhere, because Cubans are Cubans, even if they’ve lived outside the country for 15 years”.

Doimeadiós is the type of artist whose conversation engrosses you. His life has been a mélange of excellent work, above all because of his ability to blur the lines between drama and comedy.

“Maybe the idea of being an actor is like a conspiracy against boredom. When I was a kid, I was always sick, and I compensated for not being able to go outside and play by imagining myself on a stage”.

“It’s true that I’m better-known for my comedy. However, my biggest interest in life is to be an actor, and I think that is something that shouldn’t be labeled. It’s impossible to part the sea, especially in a world that is so interconnected, but critics, directors and actors themselves tend to create boundaries, which I think is counterproductive”.

“I try to use my own identity in my characters, mixing it all up like a tasty ajiaco (Cuban stew) and opening up those floodgates that sometimes stay sealed airtight, and, as a result of getting too comfortable, put us in a state of creative paralysis”.

In June, Doimeadiós will be in Miami again, this time to play Quereas in Caligula, a Carlos Díaz production based on the original play by Albert Camus. It is a revival of the play that premiered in Havana in 1995, and Doimeadiós will be sharing the stage with part of the original cast — Fernando Echevarría, Carlos Miguel Caballero, Broselianda Hernández and Yeyé Báez — and with other young actors who joined the project — Carlos Riverón, Yanier Palmero, Yerandy Basar, Léster Martínez, Ismercys Salomón and Javier Fano.