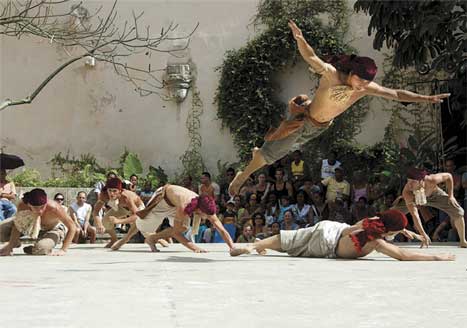 One of the most attractive events in Havana is the International Festival of Dance in Urban Landscapes, and its 17th edition was held from April 18 to 22. Created and organized by Isabel Bustos, director of the Danza Teatro Retazos dance company, it is a real fiesta, not only for those who are intentionally participating in it, but also for any passerby in Havana who comes across these artists as they take to the streets to perform.

During the festival, workshops were held in the morning and participating dance companies went out into the streets to dance in the afternoon. This year, groups and dancers came from fourteen countries and nine Cuban provinces.

The streets of Habana Vieja became a continuous stage for five days, as the city danced with all who moved through it.

The first May rainstorm