Darío Leyva
in Economy and Business
1 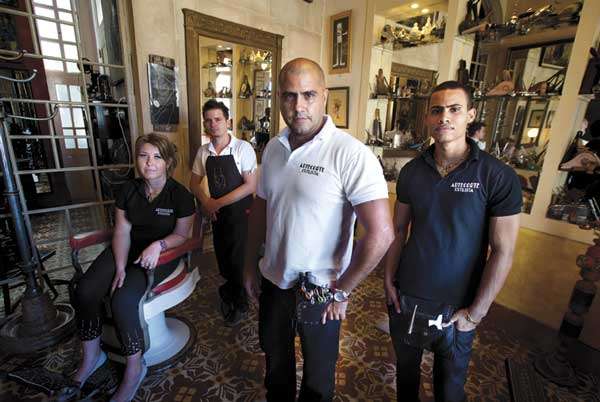 I arrive after a long walk and the building’s stairs promise a long way up. And it is. As I climb, I am accompanied by excellent drawings, painted on the walls. I ask for Papito and I am shown in. Even though I have come unannounced, he will grant me a few minutes of his time. I wait on a sofa, watching him go from one customer to another, cutting hair, combing. This is a hair salon different from any other I’ve ever seen, full of artwork and antiques rescued from oblivion.

Even though Papito has several workers in his salon, he is in constant motion. The customers come for him, a hairdresser who has set styles for the last twelve years.

I’ve come to interview him, to ask how the modernization of the country’s economy has impacted his work. According to published figures, in late 2011 the number of self-employed (non-state) workers totaled some 358,000, and this year, another 240,000 are expected to join their ranks. The most popular requests for self-employment licenses in Cuba are for making and selling food, ranging from restaurants to small street-side stands; transporting and carrying passengers, and making and selling household items.

Papito is a pioneer in this area of the economy. His name is Gilberto Valladares Reina, but everyone knows him by his nickname. He is 42 years old, and since 1999, he has led Arte Corte, an economic and cultural project involving barbers and hairstylists who are interested in taking their trade beyond cutting hair, based on three starting points: art, history and the trade.

“Hairdressing is an artistic expression. This is a very creative world, so I consider myself a creator,” he tells me with an air of conviction. Papito is the founder of the first barber’s museum in Cuba. His hair salon holds Cuba’s largest collection of hairdressing and barber-themed artwork.

“Now I can work with more peace of mind. The tax system is more comfortable for me. A few years ago, I couldn’t have workers in my hair salon. I had them, but I knew that they weren’t permitted. Now, I really feel better being able to have them without it being illegal; that is progress. Another good thing is that we are creating jobs for society.”

“This is a very competitive world. Now you can talk about a hairdressing movement in Cuba, which means you can feel the competition. Now it is not just individual hairdressers; small business people also have opened salons, and they are well-equipped.”

“We have the advantage of experience. With twelve years of work, we have matured and learned. But I think it is excellent for people to get training.”

When I ask him if he feels like a businessman, he hesitates before replying. “In a way I do. I think I am. There are different types of business people. In our case we are micro-entrepreneurs. From the moment you decide to run a business, no matter how small it is, you must think of it as a company. The key factor does not lie in the meaning of the word itself, but in how you see your business on a day to day basis. In my particular case I am also involved in a cultural project. So my goal is to create an economic project with social awareness, an economic project to sustain social projects.”

Over the years, the block where Papito’s Arte Corte salon is located has become a real example of a community project. His idea is to create a “Hairdressers’ Alley,” a Café El Fígaro and a barber-themed souvenir shop, all with the participation of local residents. Currently, a hairdressing and barber’s school is located there, along with a gallery and a small park. The Arte Corte project proposed the idea, and neighbors have been carrying it out with their own efforts, making the block into a community space with economic growth.

According to figures on the hairdressing trade, most workers are between 40 and 49 years old or older than 60; the proportion of women has grown, and the academic level of those who join the industry is higher. “We as a project are very interested in working with young people. Our school, created with the cooperation of the City Historian’s Office, is designed to teach the barber’s and hairdresser’s trade and to encourage young people from the community to learn it. We also want to extend it to other trades. I think that to be able to carry out economic projects with young people, you have to create the conditions for training them. You have to have quality trade schools to encourage young people to learn. We should create a culture of the trades starting with the grassroots, because everybody is important.”

As we wind up the interview, he gives me his views on how this economic alternative could be improved: “It is not fair that all workers in my sector have to pay the same taxes, even though we are in very different places. Working in this busy part of the city is not the same as working in the countryside. I think these are changes that should be studied, although that might be happening already.”

I shouldn’t keep him any more; his customers are clamoring for attention. As I leave, he is setting down his scissors belt and bestowing a smile on the client that just walked in. I wave a quick good-bye. The stairs again.