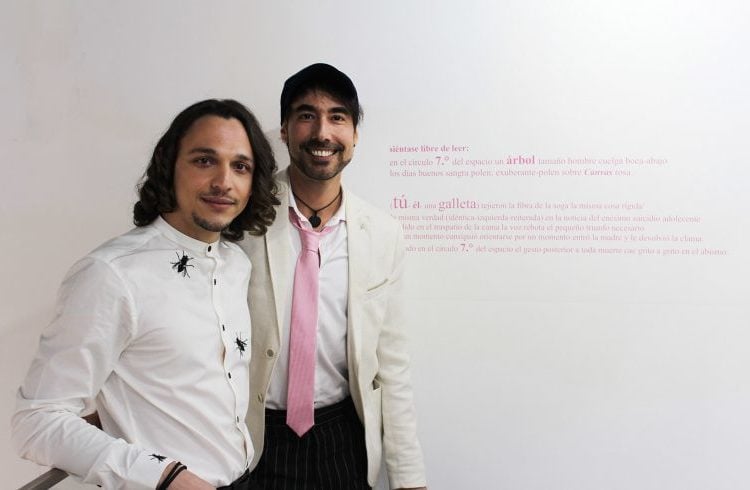 Two Cuban creators meet in the “Full of Pollen” exposition inaugurated last March 30 in the Kendall Art Center of the city of Miami. Spectators and readers will be able to approach this particular synergy until next May 25.

The work of Maikel Domínguez, who studied in the Higher Institute of Art (ISA) and the Royal Institute of Art of Stockholm, Sweden, has been described as “New Painting” or “Beautiful conceptualism.” Poet Eduardo Herrera is the winner of the 2016 The World On Wings International Poetry Award, organized by the Voces de Hoy publishing house in the United States.

It is the opportunity to appreciate some of the obsessions, reasons and engines that have started up not just the friendship between two creators, but also a poetic as well as virtual experiment by two Cubans on the other shore.

Why mix poetic visions with painting?

Maikel Domínguez: The idea was born from a reciprocal identity of our works. We have mainly felt a mutual identification that is not understood as chance. Although our works separately explore very particular worlds, they are based on our histories and experiences. In this sense, due to our origin and current circumstances, it has been very organic to find multiple points in common. Painting and poetry concentrate on the essence of things. Before we arrived they were already mixed.

Eduardo Herrera: That mixture is inherent: implicit beyond our wills. With this work we try to present it, bring it up, to place in front of the spectator what has been born of one same genesis.

Where did the idea for the project come from?

Eduardo Herrera: No reason. The most plausible explanation is the convergence of our works. When a close friend showed me Maikel Domínguez’ work, I felt a sort of natural symbiosis of our expressive performances. Without taxing the individuality, the visions are enriched.

What do you expect the public will receive from this aesthetic proposal?

Maikel Domínguez: To be honest, I have greatly enjoyed it. It hasn’t been a difficult process, rather comfortable and enthusiastic. I would like the public to feel that coherence and good vibe.

Eduardo Herrera: I always bet on the explosive spontaneity of the observer. But if in some point the public-artist telepathy is achieved, I hope the ideological marriage of our works can be perceived.

What are the exposition’s fundamental thematic centers?

Maikel Domínguez: “Full of Pollen” is a manifesto where I try to concentrate the essence of my internal universe. The pieces are essays about balance, scenes where the highest contrasts coexist in a perfect synchronization.

How is the testimony, the personal imprint, expressed in the work of both?

Eduardo Herrera: Each element of my poetic discourse is a fragment of the jigsaw puzzle I live in. Without that unity, the human reason would not be expressed coherently.

Maikel Domínguez: My work is not conceived without the testimonial, without the almost narrative. I believe that one can tell stories with clues or symbols that place you in my personal ground. However, it is precisely how enigmatic it can be at times what makes you aware of the deep intimate root that my work has.

If you had to contain the world in a single word or an image, what would it be?

Maikel Domínguez: I always have the hope that that image will be my next piece. What happens is that I haven’t finished it and it is already replaced by another in my mind. It’s an infinite sequence on which I’m stuck.

There is death and rebirth in the work of both of you but, what are your creative obsessions?

Eduardo Herrera: In my last works, especially in the one I share with Maikel, the performative is present. Interpreted in poetry, the word has contracted a debt with the visual that I try to settle in the best way.